Not too long ago I posted some photos and information about the ghost town of Yucca, Arizona. There is one other very unique thing about Yucca. We spotted it on the opposite side of the highway from the ghost town. After doing some research (I love the Internet) I found out that this desert oddity is called the Yucca Golf Ball House (among other things).  It was built in the mid-1970's and it doesn't really look that much like a golf ball to me.  I was told that it was originally known as The Dinesphere, Space Station Restaurant.

Apparently, The Dinesphere was yet another rip-off scheme enticing people to buy worthless land in the middle of the desert. Remember my post about Santa Claus, Arizona?

After the unsuccessful real estate ripoff, the the Dinesphere sat unused for several years.. In the early 1980's somebody bought the structure as a present for his wife and remodeled it into "The Golf Ball House," containing over 3000 square feet of living space. He also built a few other "space age" structures to the property. Although some people called it the Golf Ball House, many others referred to it as The Arizona Death Star.

Currently, there is a new owner who calls it Area 66 and sells UFO related items. Judging by the banners, we could have stopped there for a cold beer. However, we had many miles of desert driving to do before dark. Maybe we'll stop next time, but only if the owner doesn't try to gouge us. 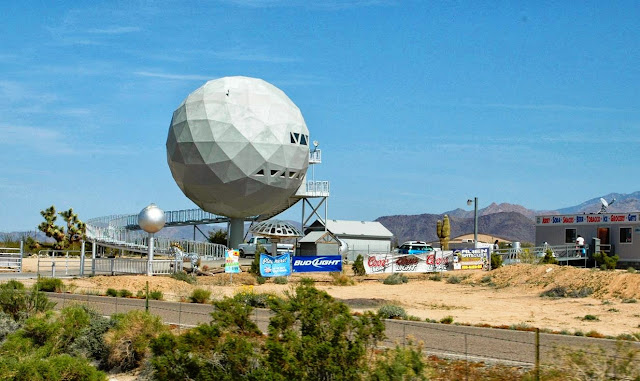 Maybe if it wasn't surrounded by all the other stuff, it would look like a golf ball. 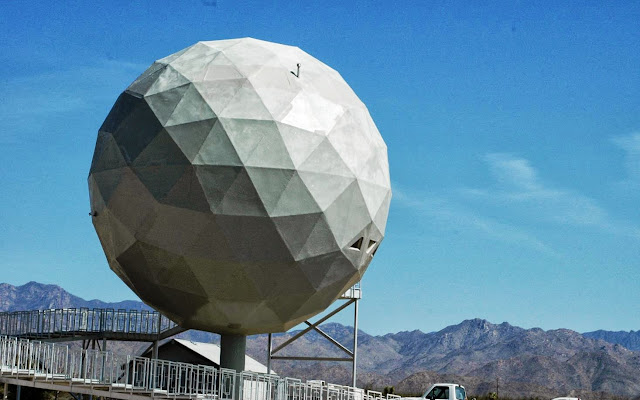 Even if was an awesome house on the inside, I'd still be wondering, "why did they build it here?" There isn't anything else here... One of several spacey looking things around the property.  As the crow flies, this place is really close the Semi-on-a-Stick from the Yucca Arizona post.