In my last post, I showed you an ancient Kumeyaay village site in Anza-Borrego. I also mentioned that the area is deadly hot during the summer months. Despite this fact, Indians thrived there for thousands of years. In part, they managed to do so by moving to their summer villages, up in the much cooler Cuyamaca Mountains. Although both of their seasonal homes were organized and semi-permanent, they still lived primarily as "hunter/gatherers."

Also in my last post, I included a distant photo of where we were camped in the Cuyamaca mountains (about 12 miles away). Very close to where we were camped, I stumbled upon a pre-historic village ("Ah Ha Kwe-Ah-Mac") site, that may be the same summer village site, that was used by the same group of Kumeyaay Indians, that lived in the village in my last post, during the winter months. These two village sites are about 10 miles apart and there are ancient Indians trails leading from one area to the other. This village site has been abandoned since about 1869. That sad story, will be the subject of a future post.

We were camping in the Cuyamacas for the same reason the Kumeyaay did; it is very hot down below in the desert.

I didn't actually stumble across the summer village site. I spotted some bedrock mortars (morteros) while out on a hike a couple of months ago.  Some of you probably remember a post involving my search for the remains of an old gold mining camp. In the post I told you that while not actually lost, I stumbled upon a great surprise (to me anyway).  I spent a lot of time on the Internet and used every bit of my intuition relating to where and why Indians settled in particular places. 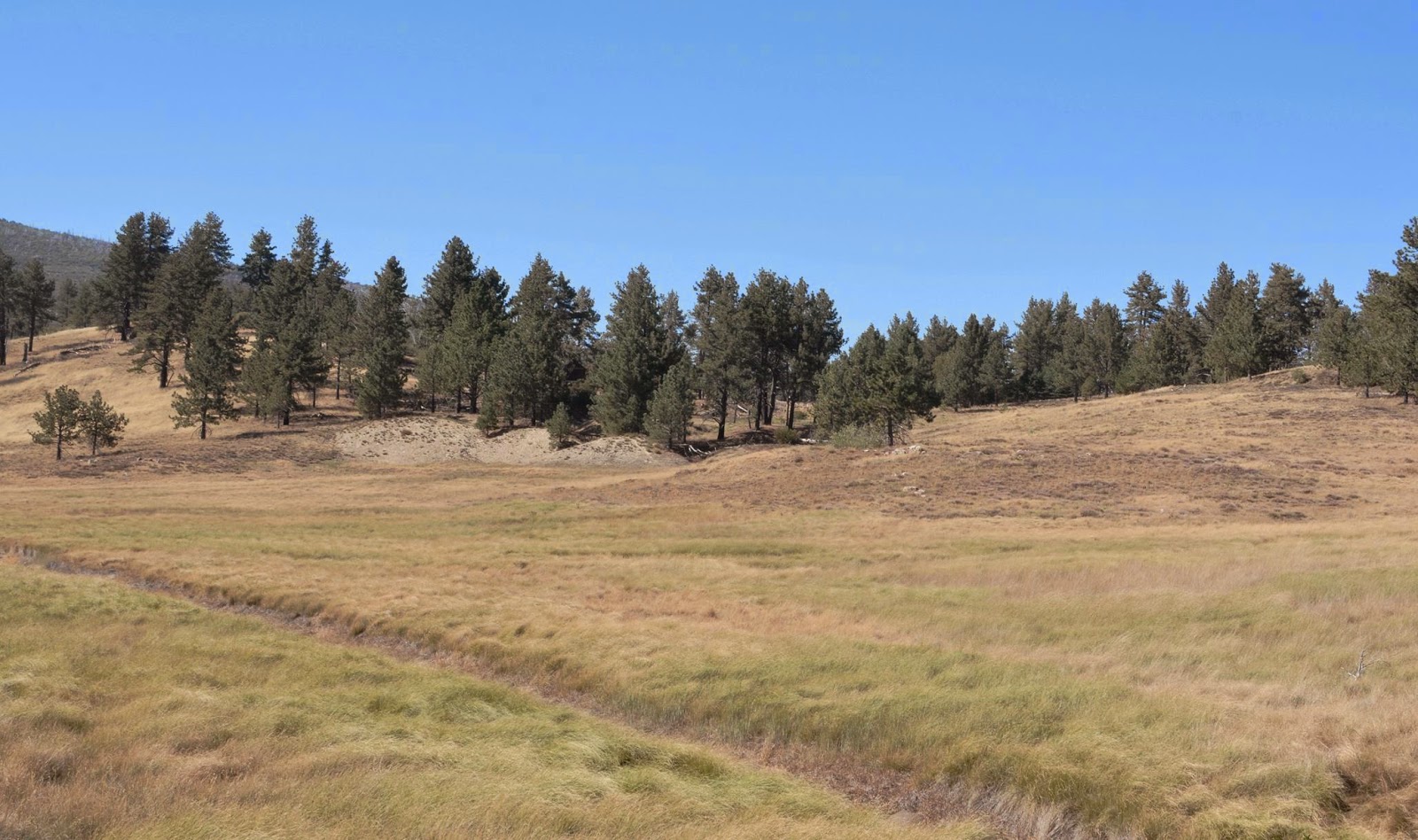 While looking for the mining camp, I eventually ran across a trail heading in the direction I needed, to take me back to where I started. The little creek cutting across the meadow in this photo, was used in ancient times as well as today (mostly by game). Most of the hill that the trees are growing out of, is made of mine tailings. The tailings are lighter in color and some are visible, just left of center, in front of the trees. At one time the meadows in this area were surrounded by a forest of oak trees. A lot of acorns required a lot of mortars.

It may not catch your eye, but the little outcropping of granite bedrock in the center of the photo, sure caught mine. 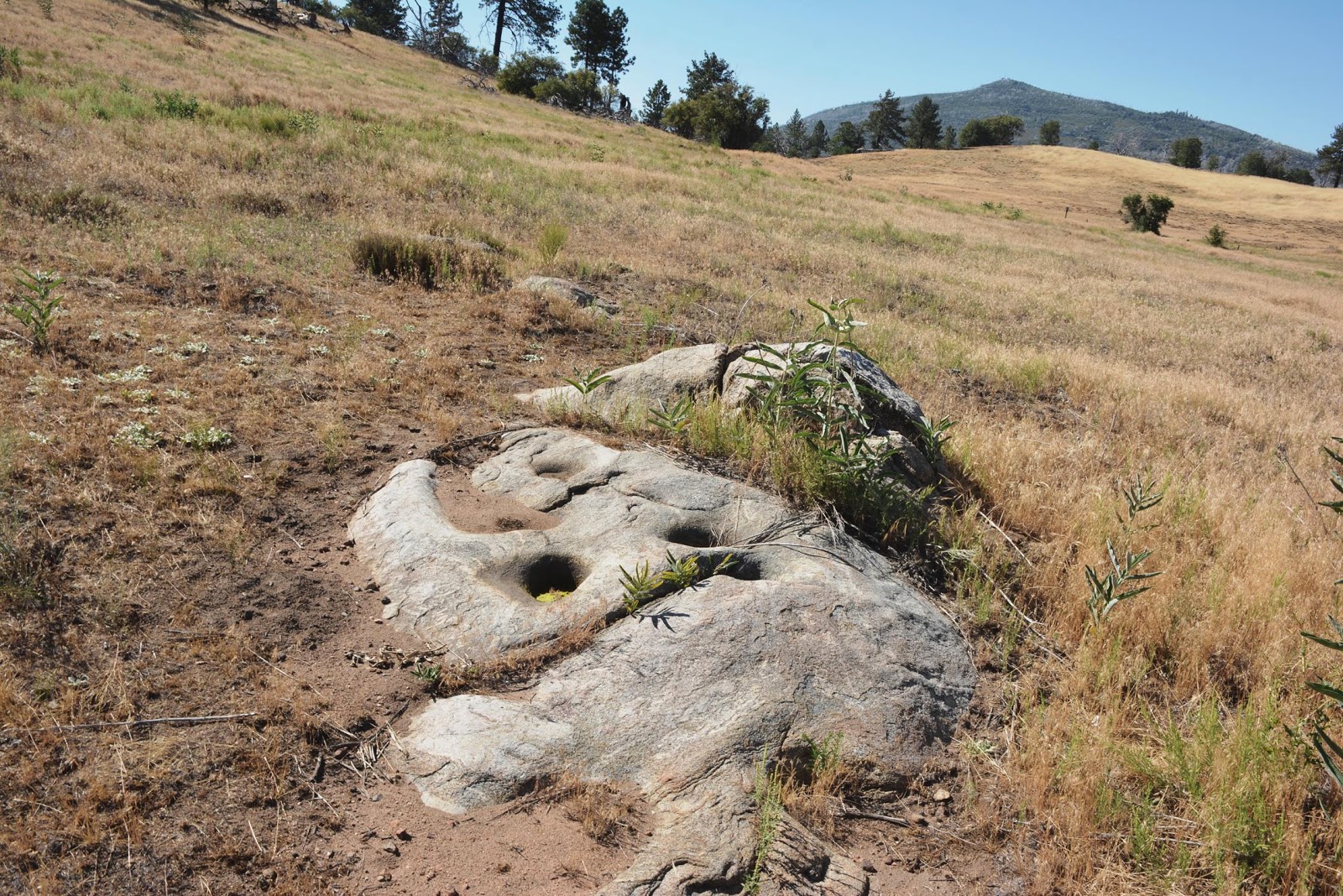 This photo and the next are that same little chunk of bedrock. 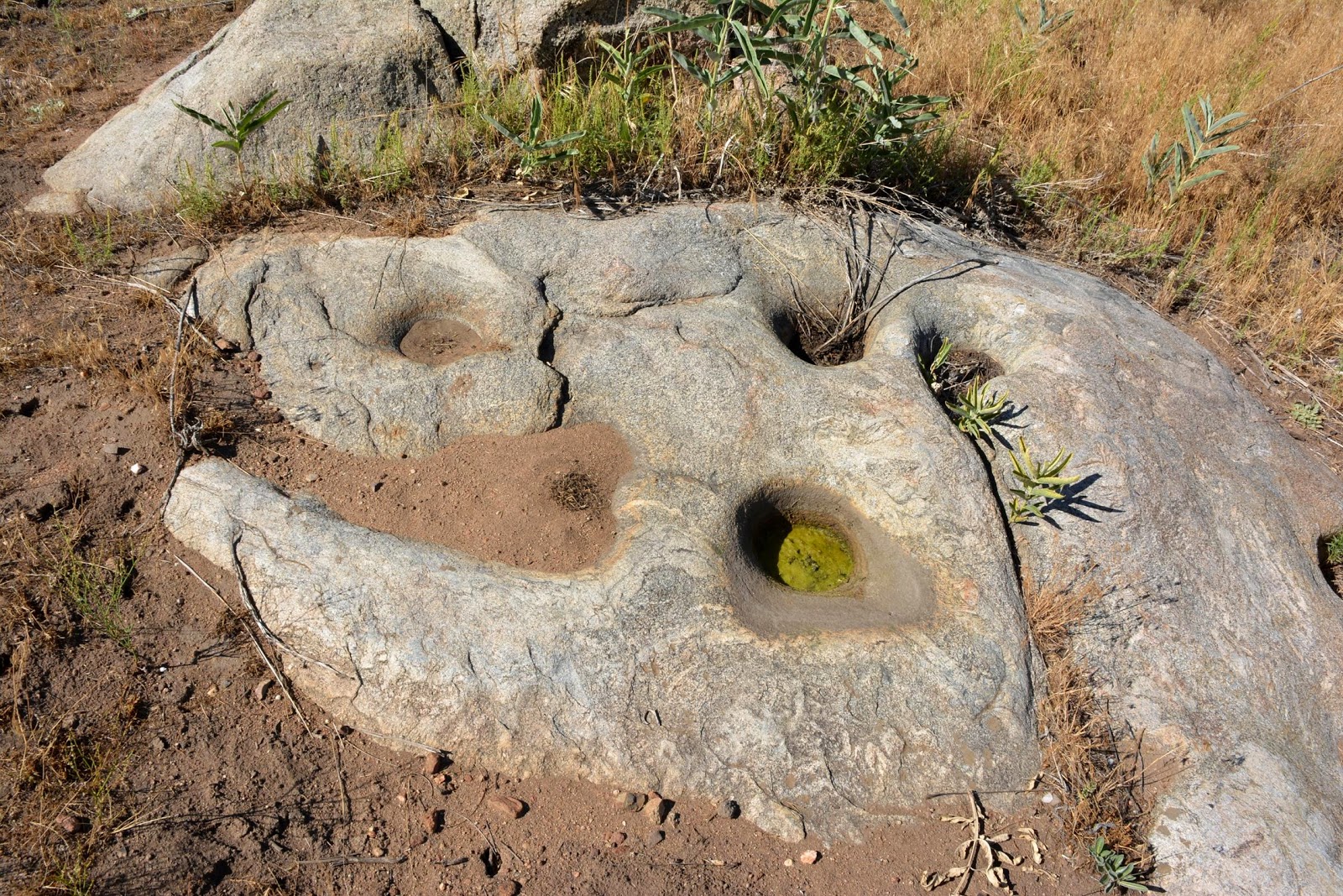 In addition to the four mortars on this rock, there is also a bit of "Lithic Scatter" around it. Lithic Scatter is pieces of rock (many times flakes), removed from another rock by percussion or force. This was done to make tools, projectile points, blades, etc. 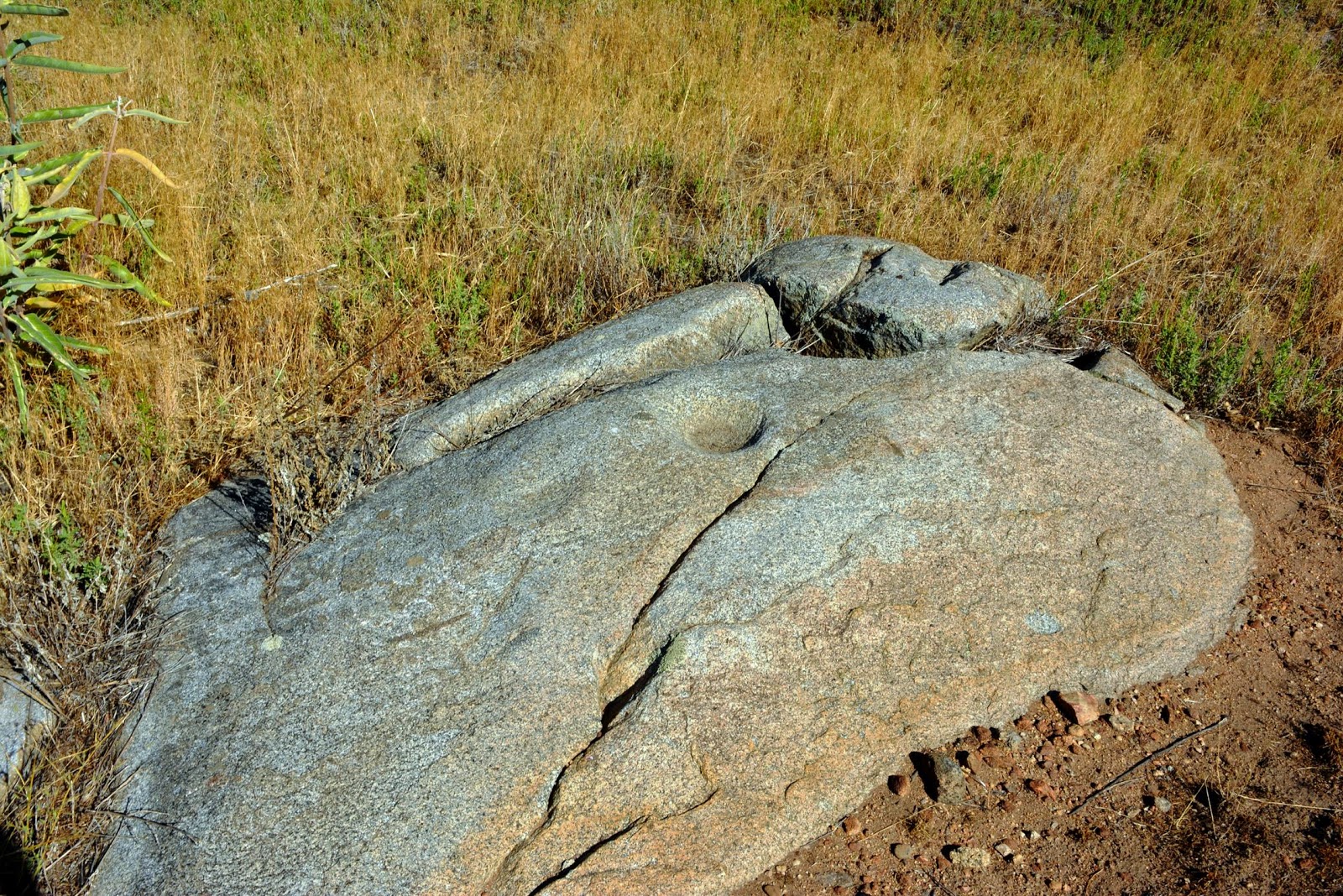 This mortar (and many more) were on top of the hill, where I took the first photo

Pot sherds (shards) were all over the area. The large piece in this photo was about 3 inches long. The black looking rock is obsidian. I'm pretty sure it is part of a broken tool, or point of some type. One edge had clearly been "worked" and was very sharp. There were also small pieces of soapstone around the area. The BEST thing about this entire area, was the total lack of human foot prints. We certainly didn't discover this village, but it was obvious that very few people know about it. I'd bet money that this site has never been totally excavated. 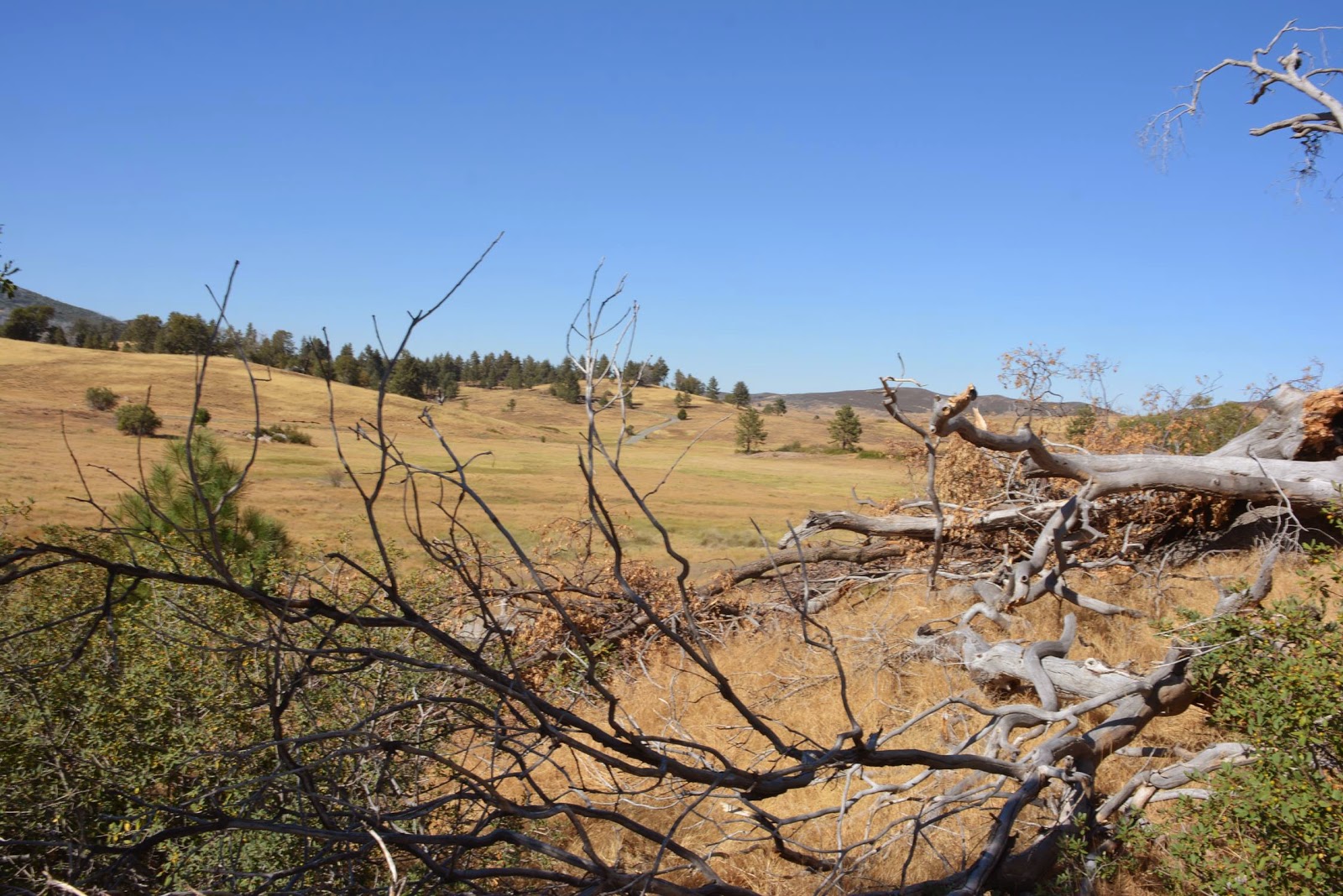 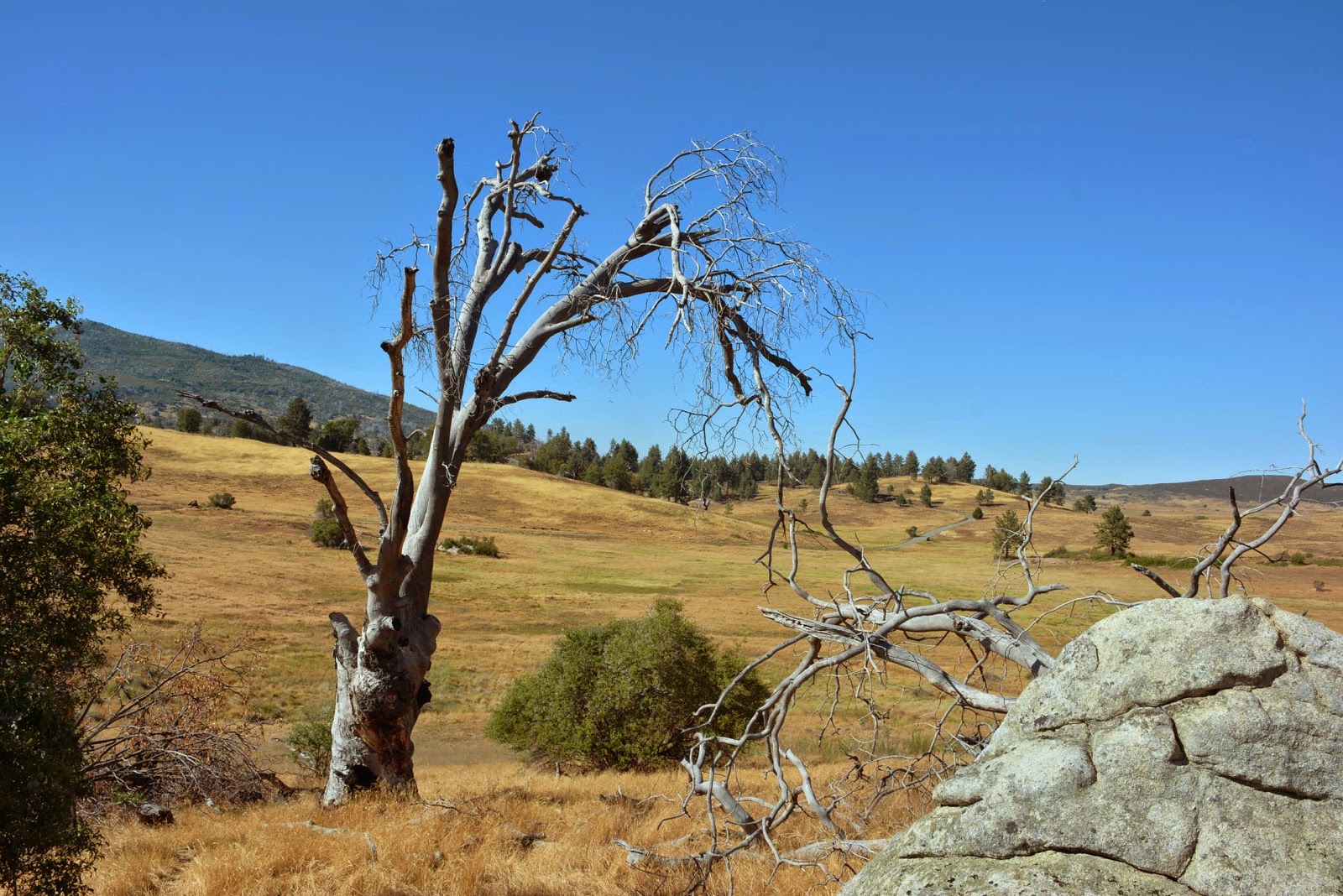 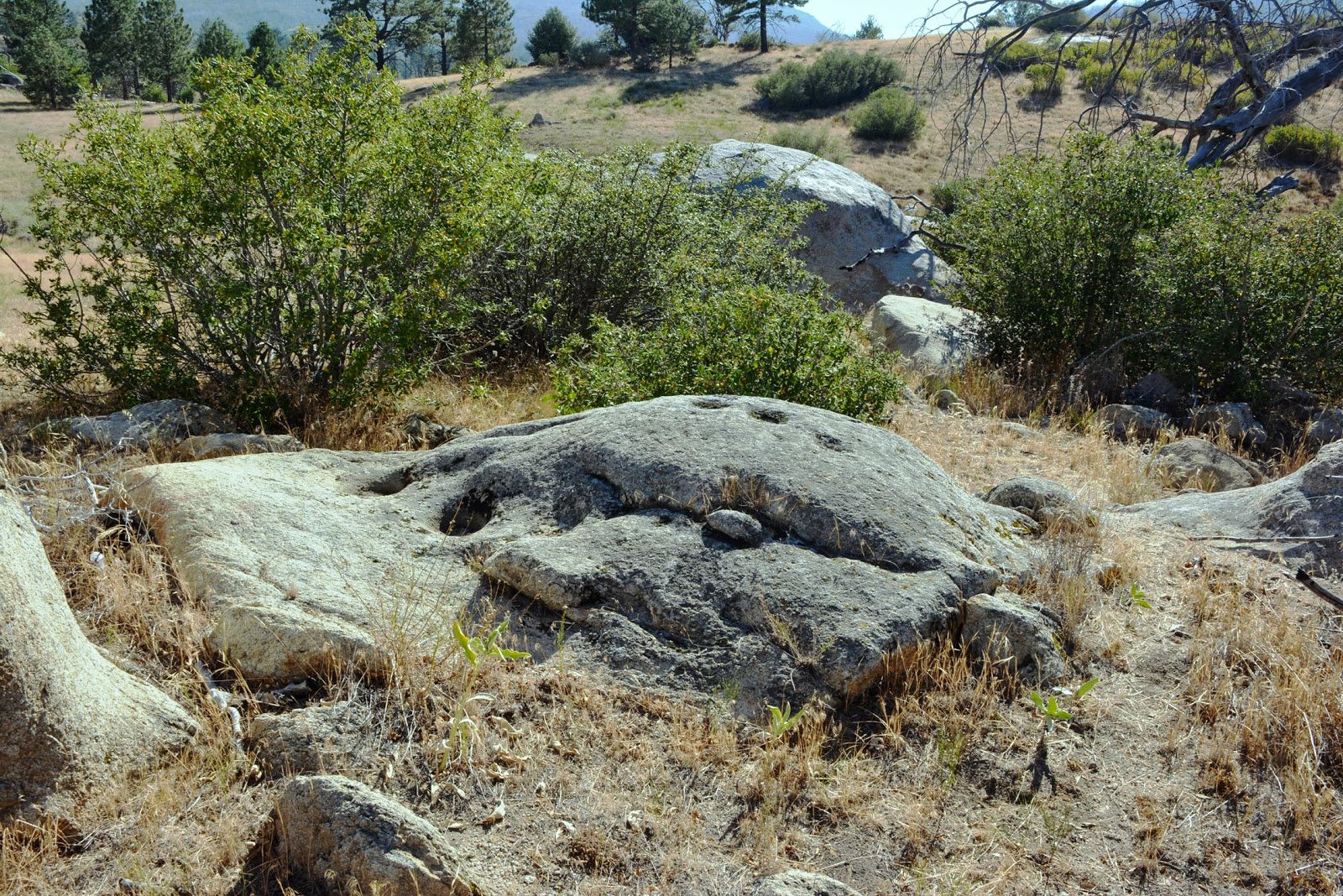 A couple hundred yards away from the last group of mortars, we found many more. 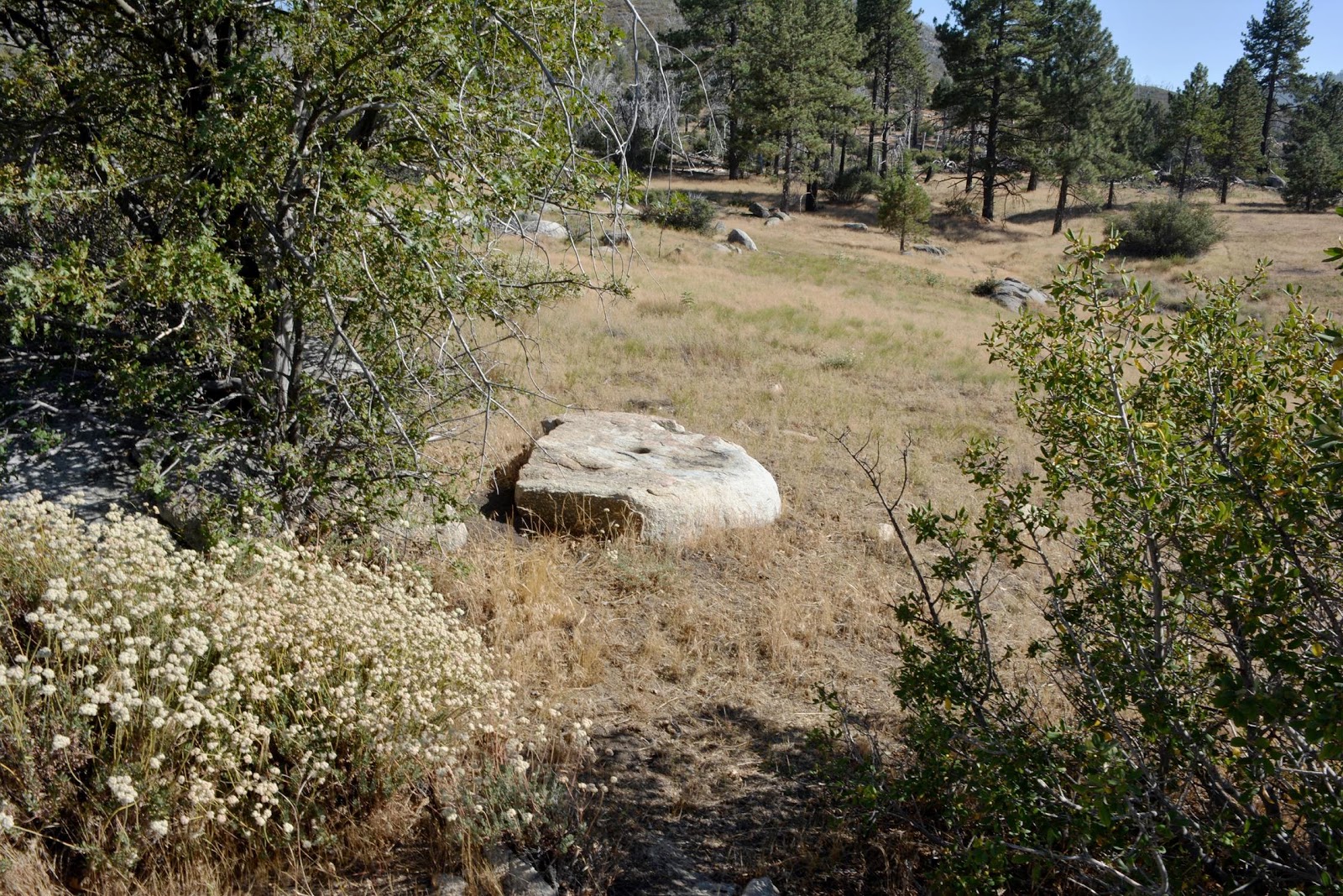 Walking down the hill, we found more.

In addition to mortars, this area was almost totally enclosed by a natural ring of boulders. 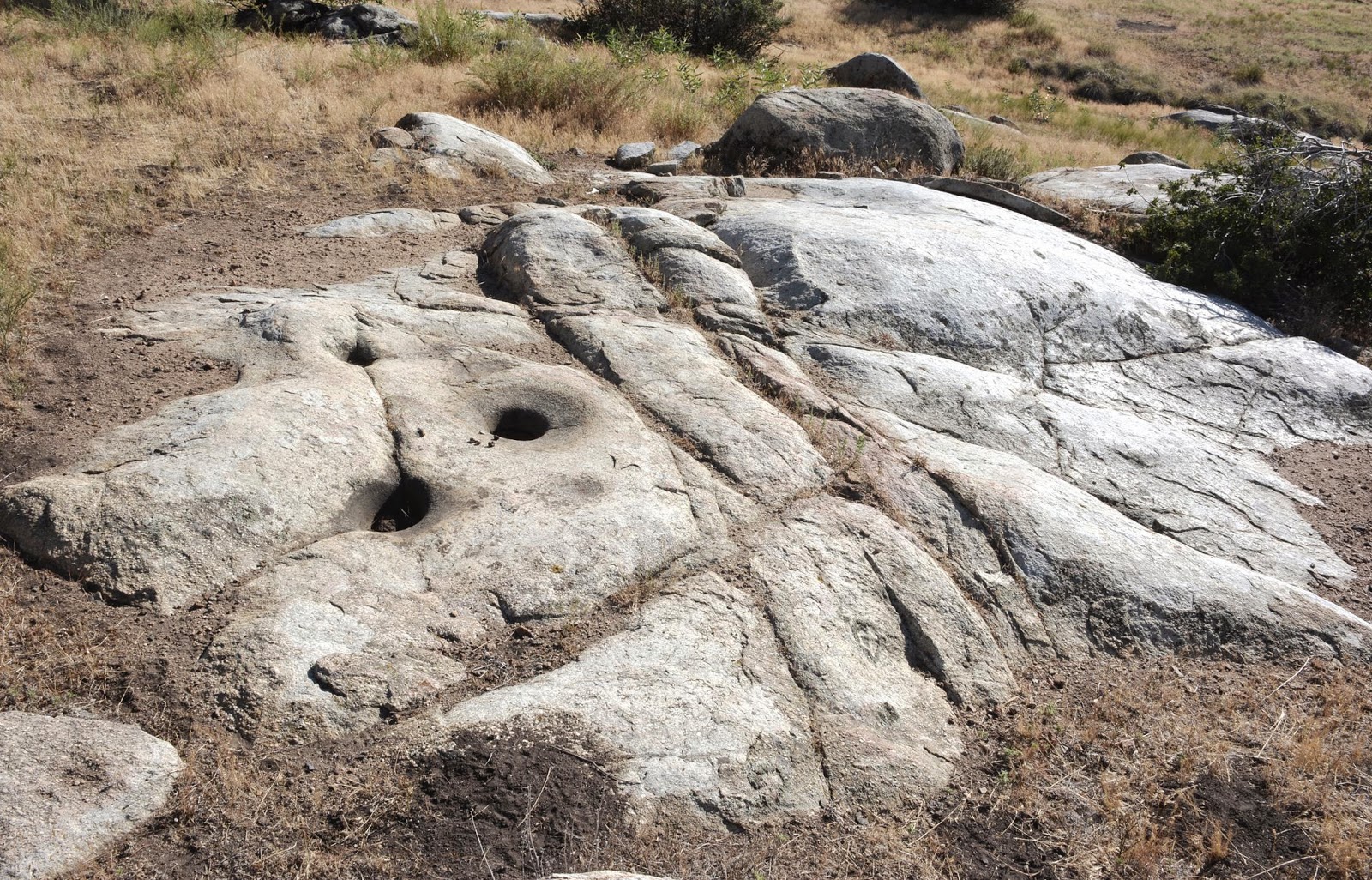 I'm not exactly sure what animal it belonged to, but this leg bone was big. If you embiggen the photo, you can also see quite a few small pieces of broken pottery. 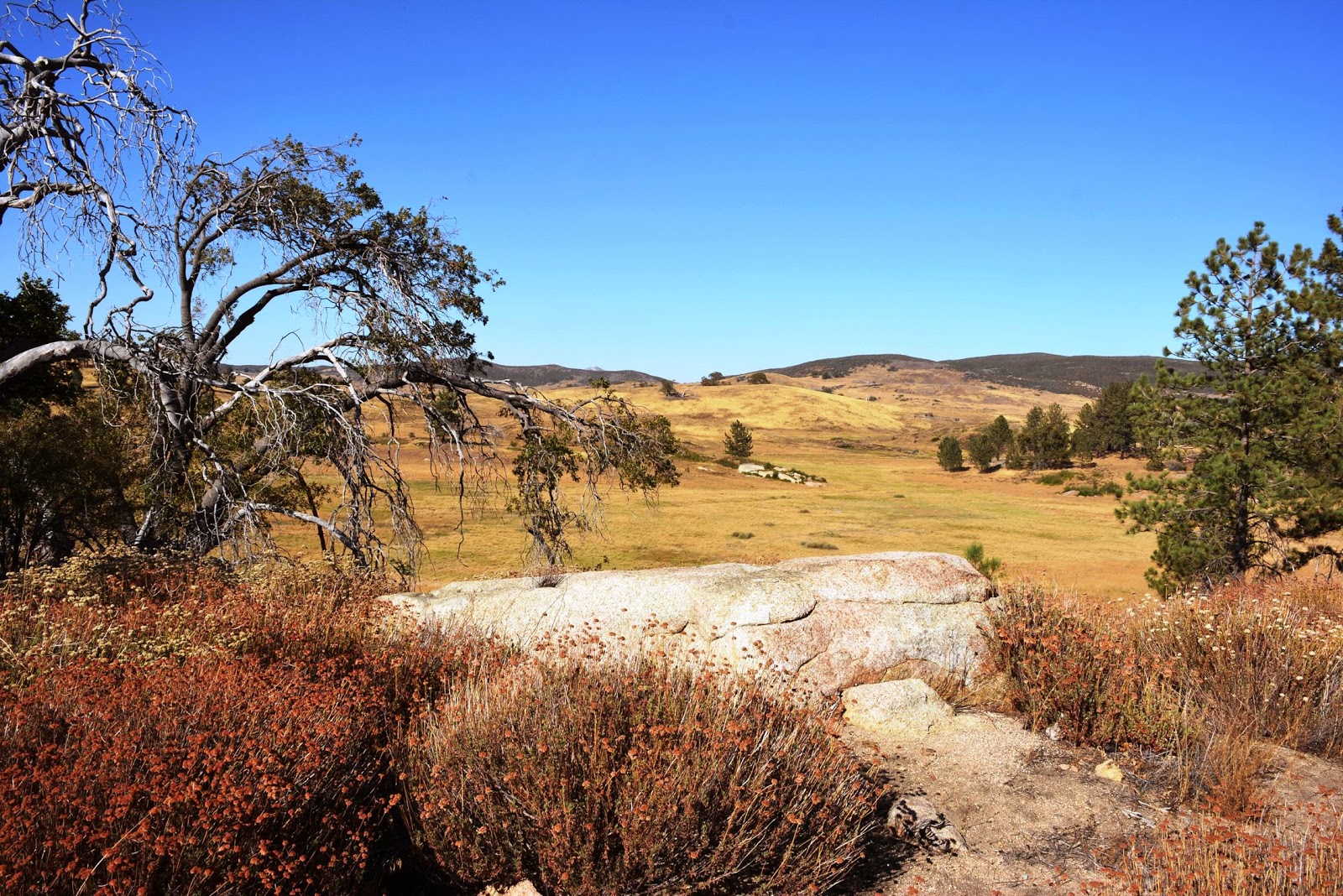 From this point, we were heading to the outcrop of granite just above center in the photo.

This chunk of bedrock turned out to be the prize of the day. You can see one mortar on the right hand edge of the photo. 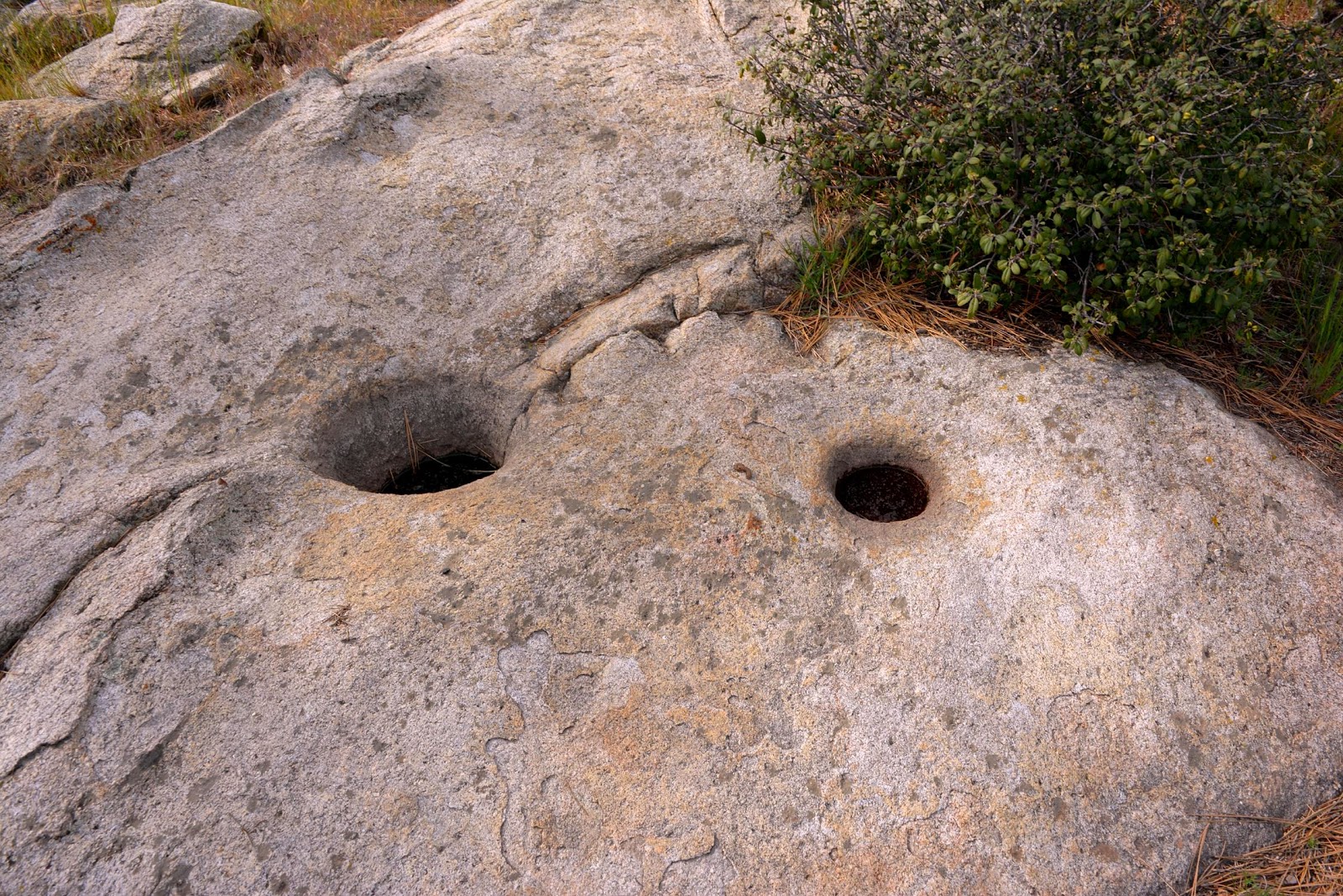 You can tell by my cell phone, that these two were very large. As this was a seasonal village, it must have taken centuries for it to get this big.

These irregular looking indentations in the granite are also grinding surfaces, but more like "metates" or "slicks" and are VERY rare. They are called Cuyamaca Ovals and are pretty much isolated to a very small area of the country. That small area, just happens to be right here. Cuyamaca Oval sites are found in meadow areas and were primarily used for the grinding of seeds and cracking acorns open. 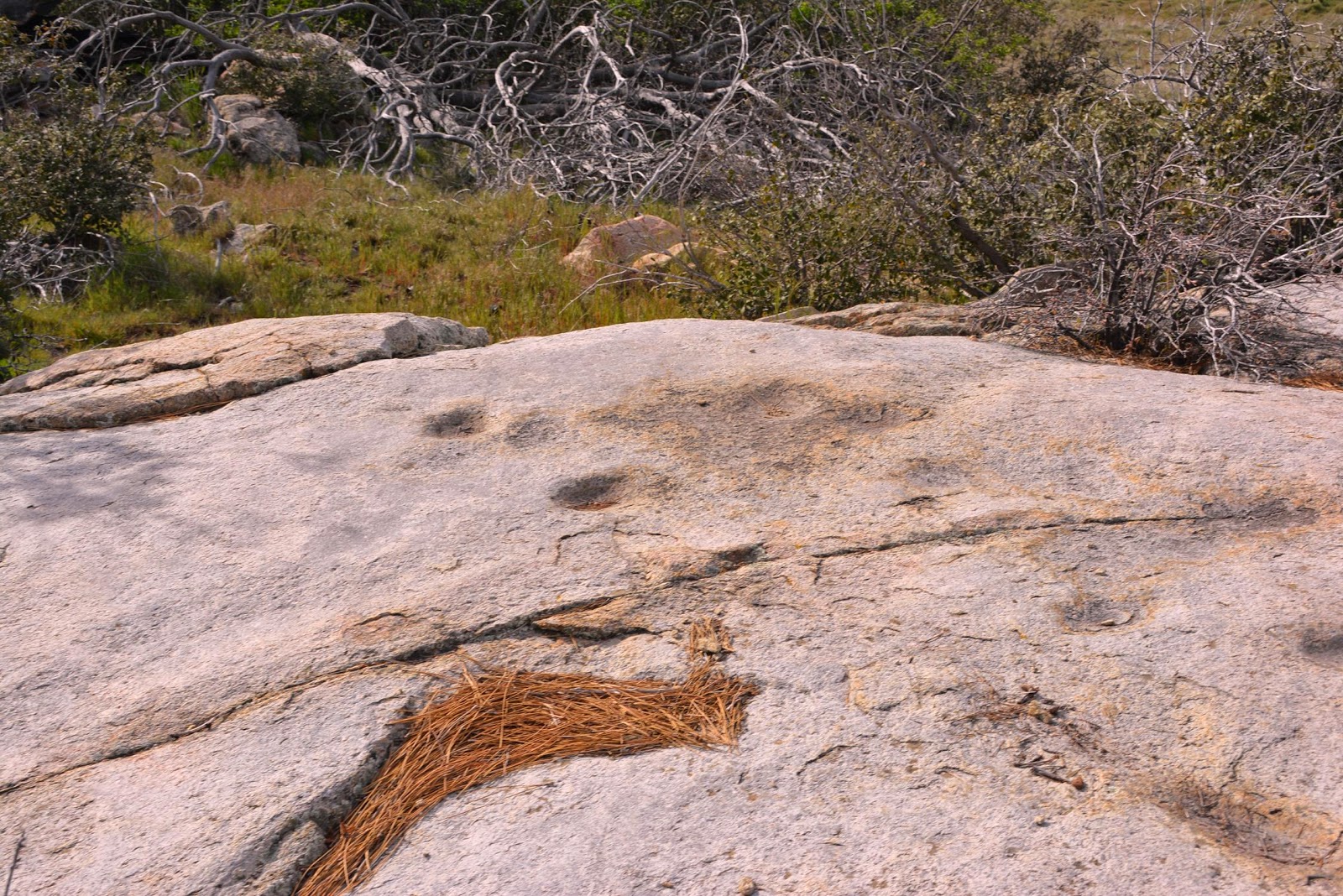 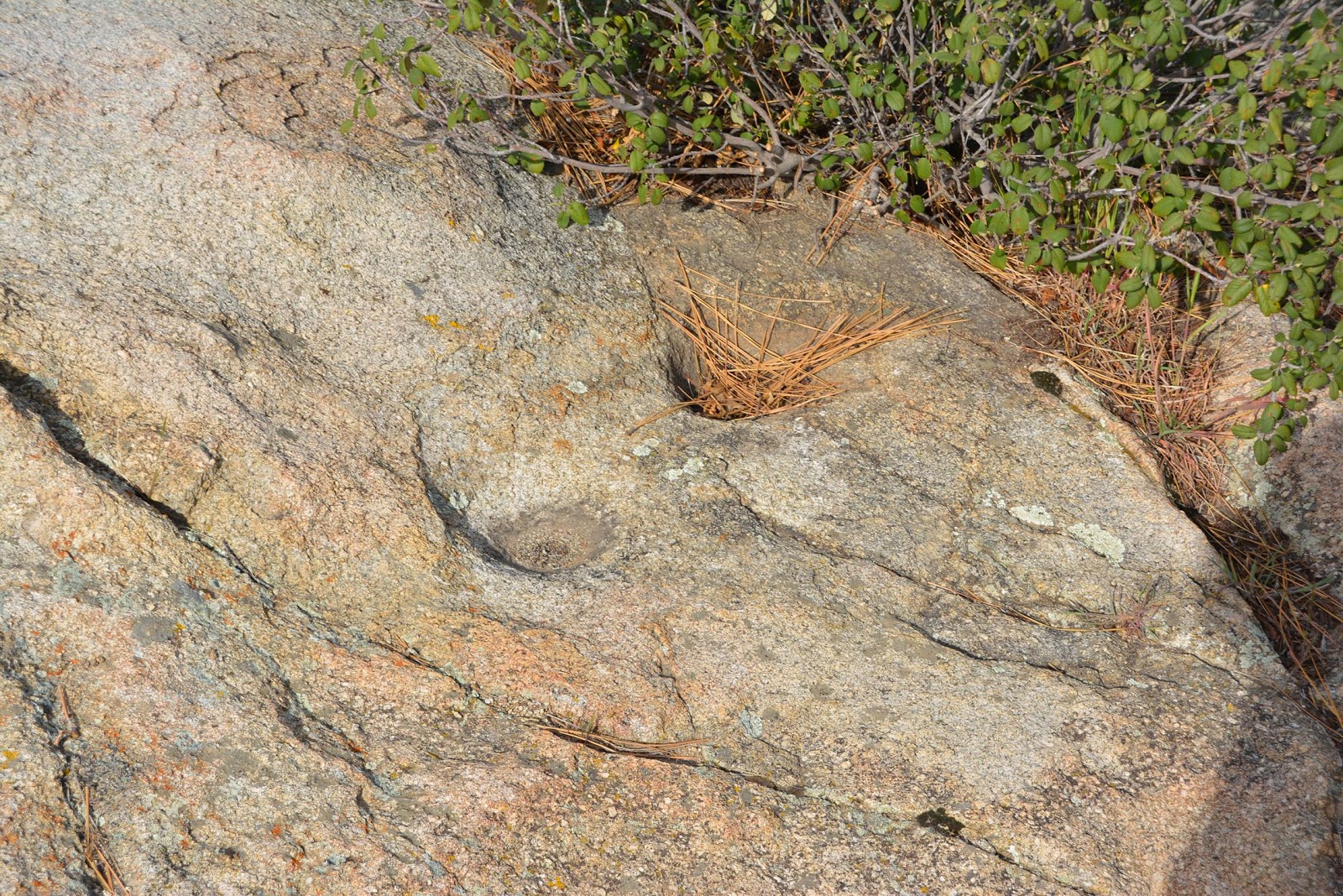 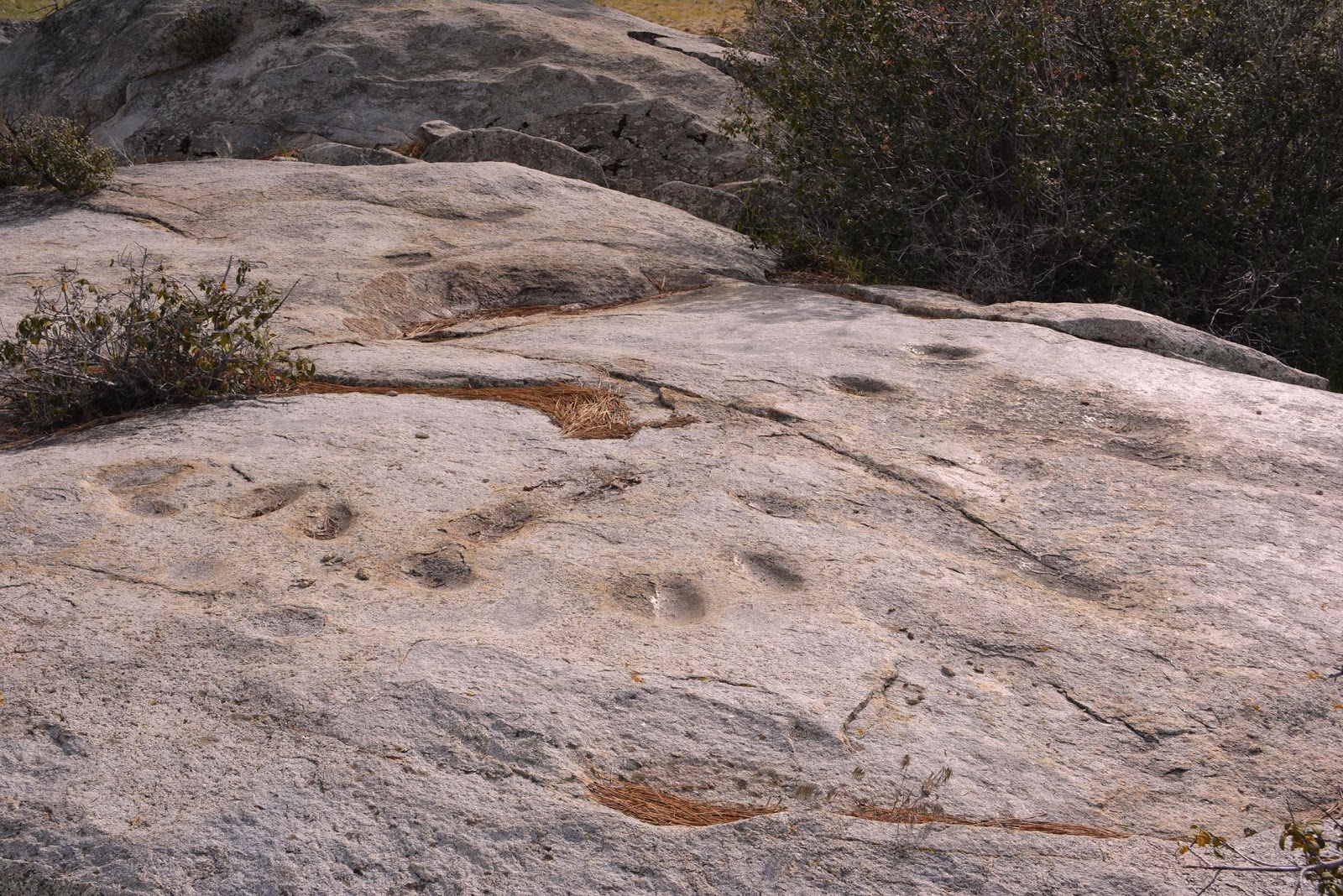 All of this and we only searched what I believe to be about a fourth of the village area.