We just spent two weeks in the desert around the Colorado river in the Mojave Desert.  We stayed near a town called Needles. One day we drove about 30 miles upriver to Laughlin, Nevada. Laughlin is a pretty good sized gambling town, with several casinos right on the Colorado River in the middle of nowhere. VERY casual, when compared to Las Vegas. I think Laughlin is most famous though, for a major fight and shootout between the Hell's Angles and Mongols motorcycle clubs here several years ago.  Our intent was not to go to Laughlin to gamble (we did though). Our intent was to hike up to a place called grapevine canyon.... 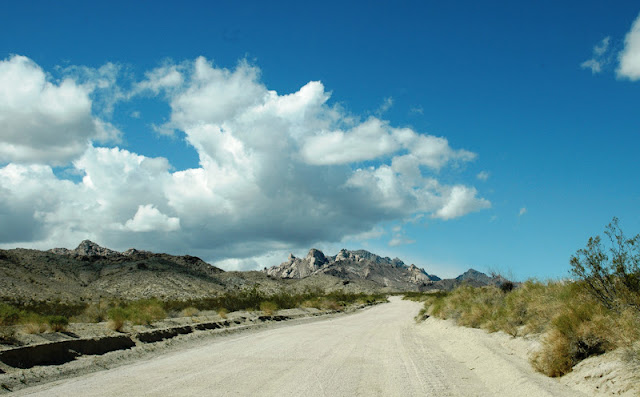 Our destination was the mountains several miles up this road. 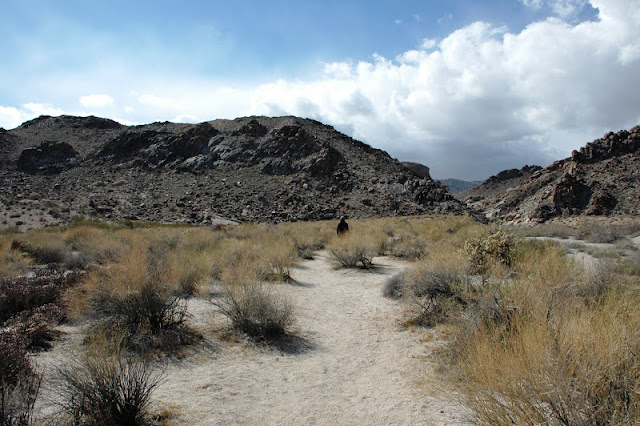 We parked and hiked up this wash for a while and then headed uphill. My wife is out front trailblazing (sort of). 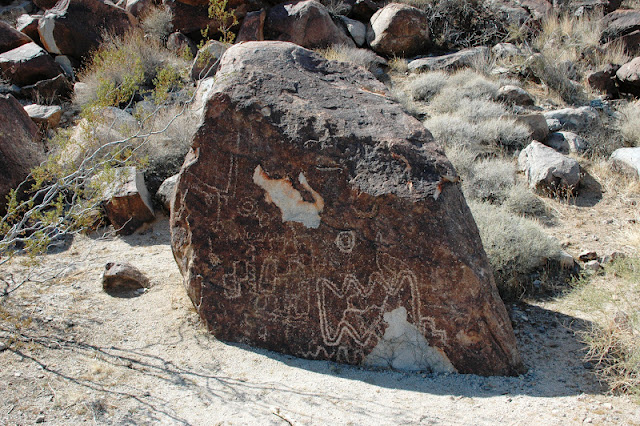 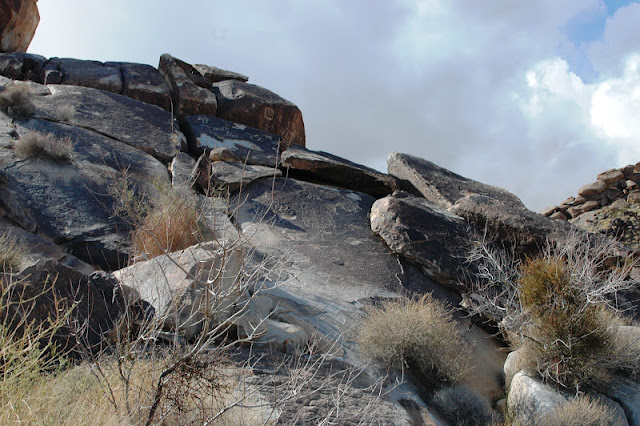 And these! (embiggen to see what I mean) 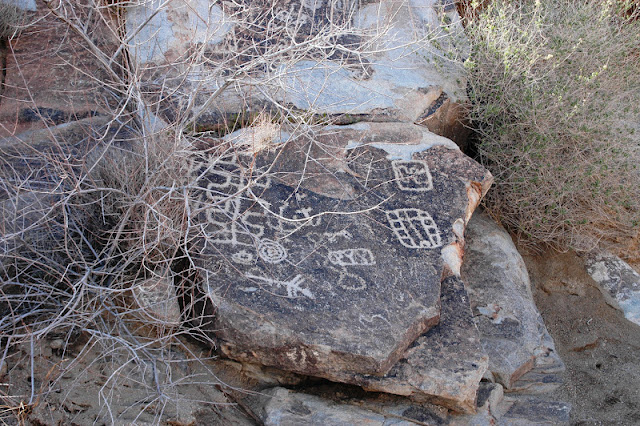 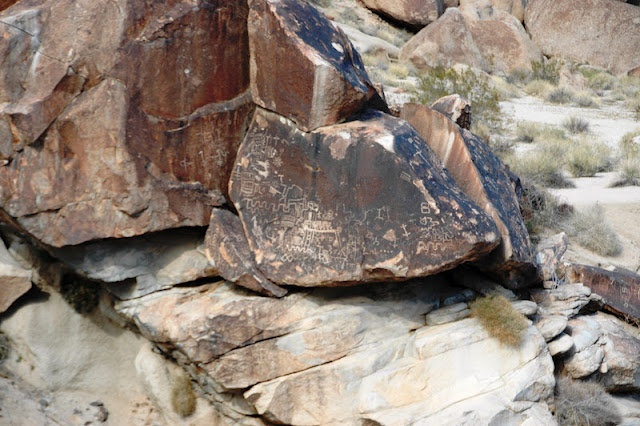 Quite a climb to get to this group. These are about 1000 years old. (embiggen please) 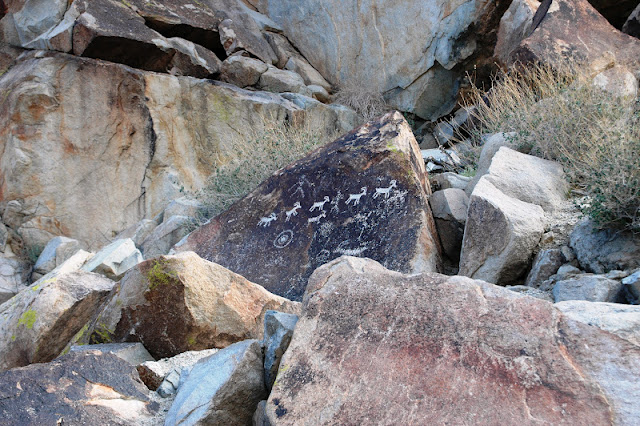 This was the best group. (embiggen) 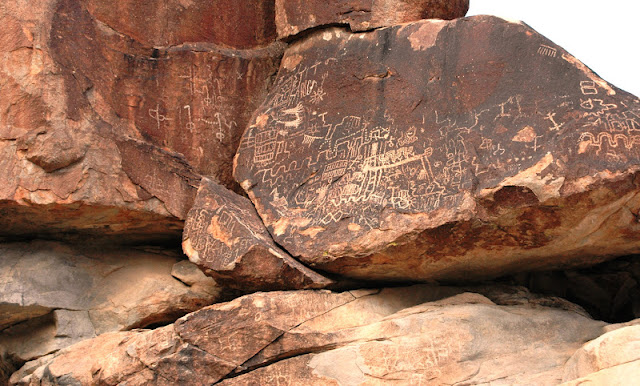 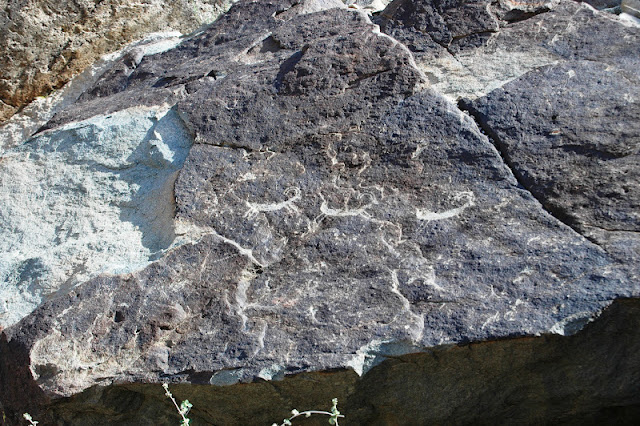 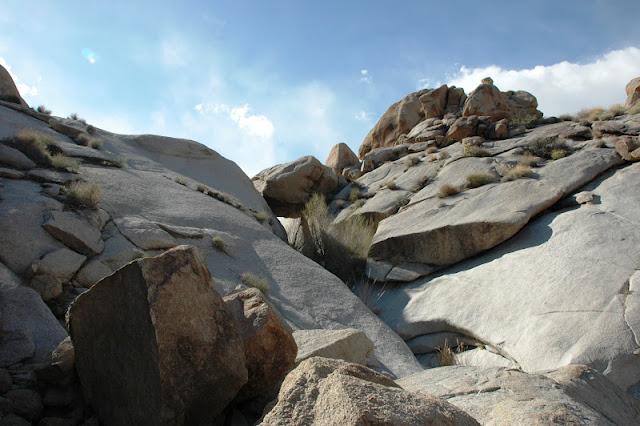 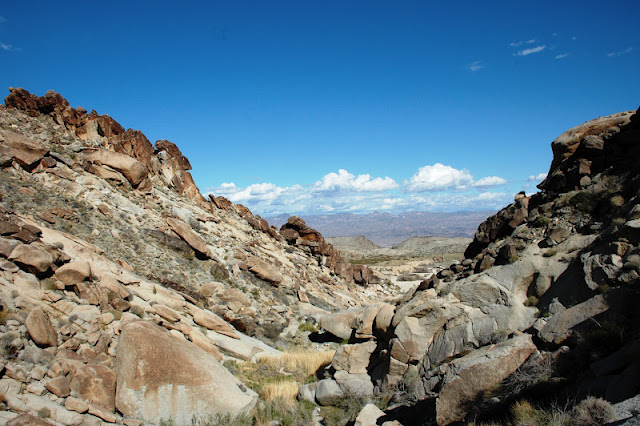 This is as far as we hiked. You can see the wash we started on in the distance. I'm getting too old for this stuff. 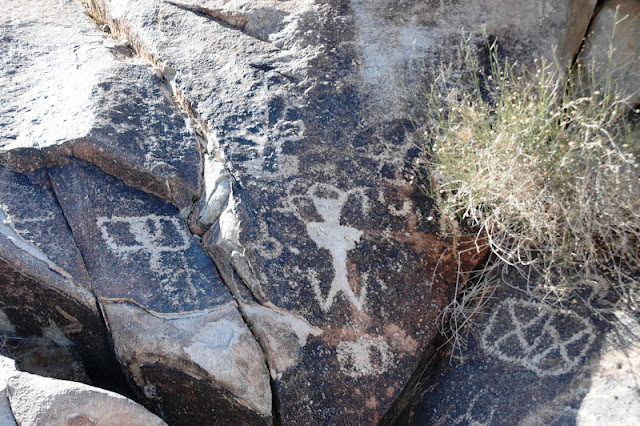 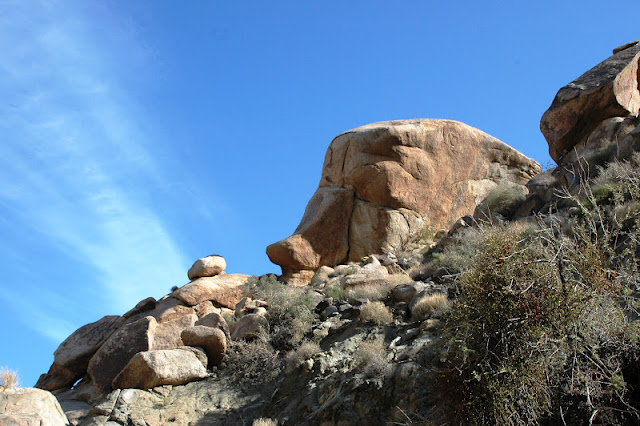 They call this guy the chief. Do you see it? 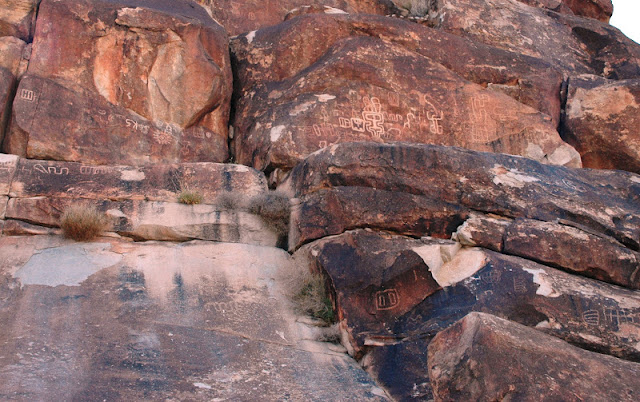 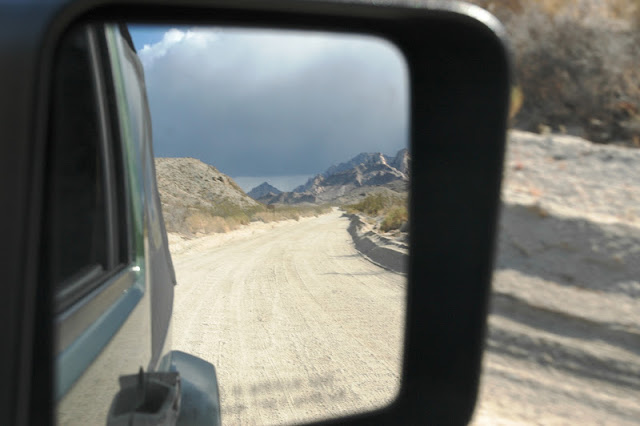 Salvation Mountain
I recently made some posts relating to Slab City, dry land Sea Serpents, and assorted other desert oddities. Today's post, may just be the weirdest most impressive of the lot.  A guy named Leonard Knight started on this little bit of folk art in 1984. After more than 20 years of work obsession, and Mr. Knight in the "hospital" no longer on the premises, we are left with his life's work; Salvation Mountain. It's pretty clear that his theme was "God is Love."  Agree or disagree with that as you will. Everyone will have to admit that this guy was committed to what he was doing. 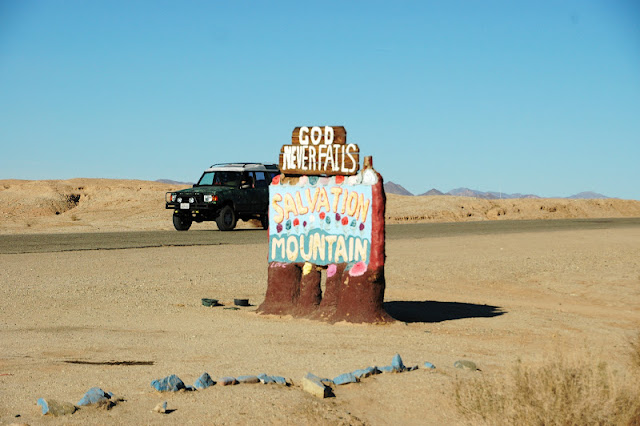 Talk about in the middle of nowhere. The closest civilization to what you are about to see is (drum roll please), none other than the modern day metropolis of (that's right folks!) Slab City! 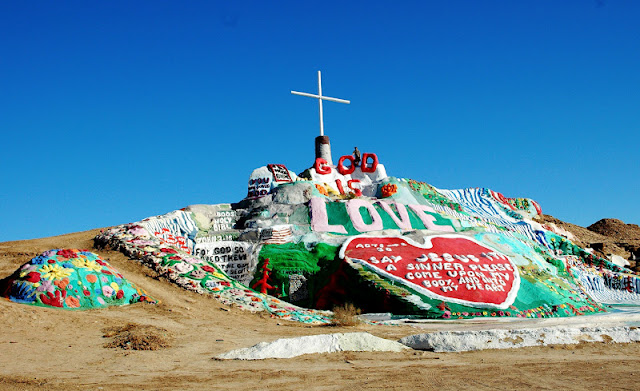 Here's the main part of Salvation Mountain. It's made of hay bails, logs, paint, and anything else the guy could find. To add some scale to the place, please note the person standing between the "O" and "D: the right of the cross. 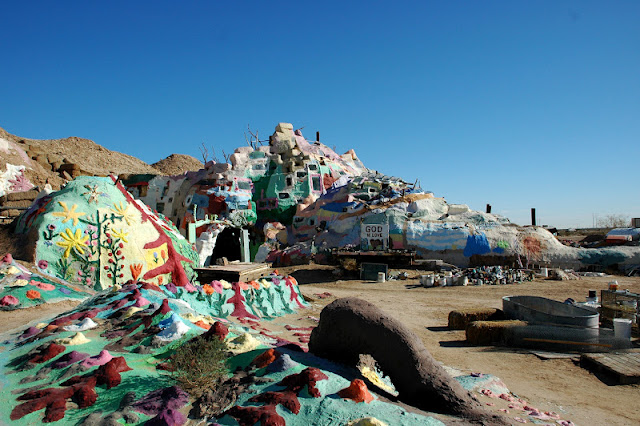 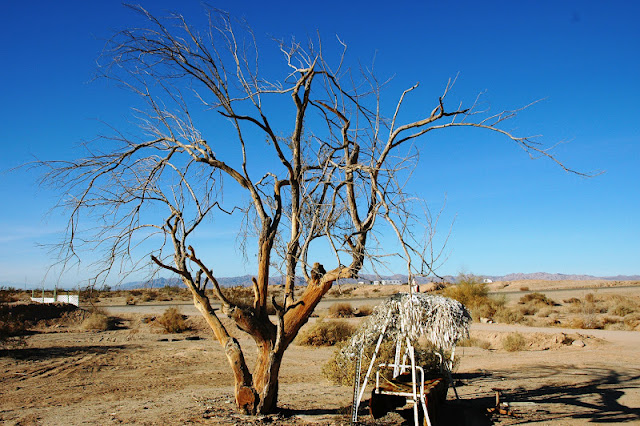 Of all the things I saw there, I think I liked this tree the best.  I would have loved to been able to move the home made bench and shade from the photo. 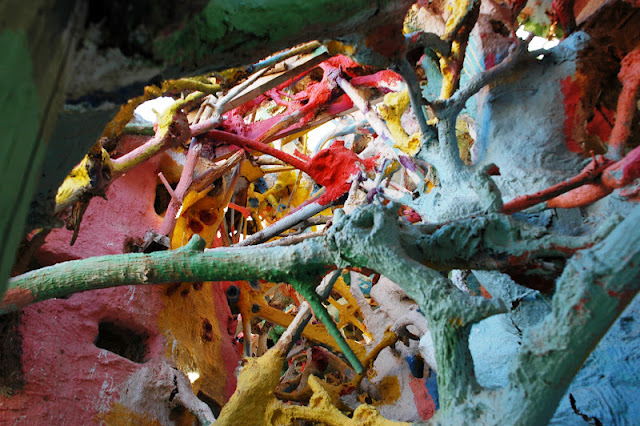 One of the "atrium" like areas. This one must have been 30 feet high. 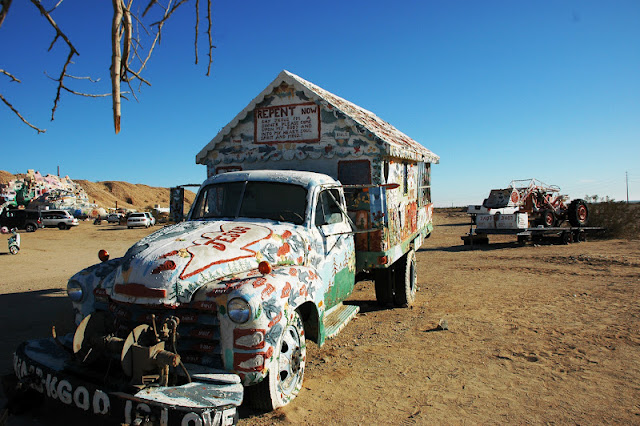 One of several old cars and trucks. Of course they all were adorned with the artists "theme." 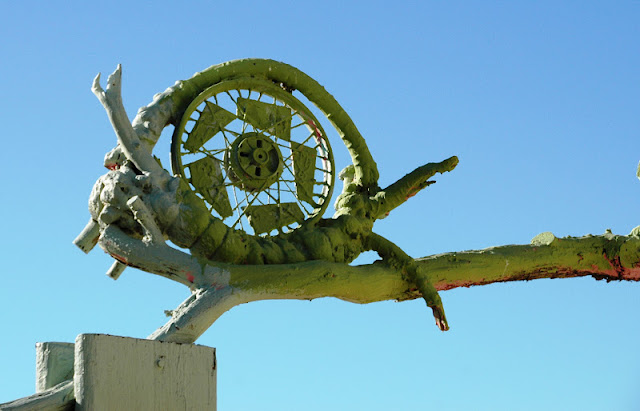 Considering that it was made of junk and old tree limbs, this was pretty cool looking. 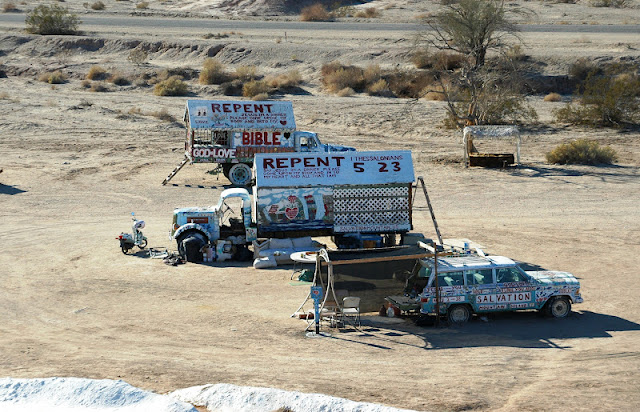 This photo was taken from the top of the "mountain." In the background, is the road to Slab City. I guess this makes Salvation Mountain a suburb of Slab City. 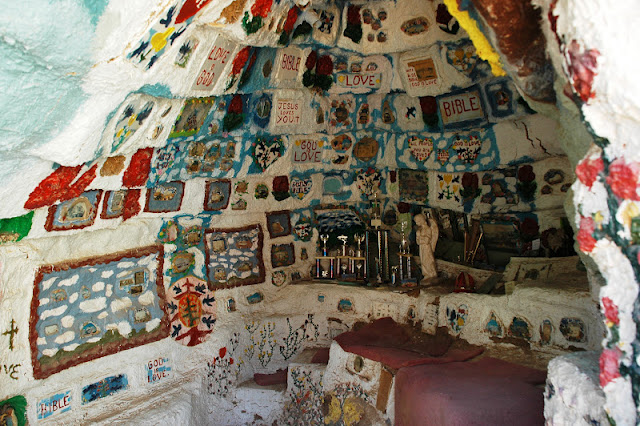 That's a lot of work to show off your bowling trophies. 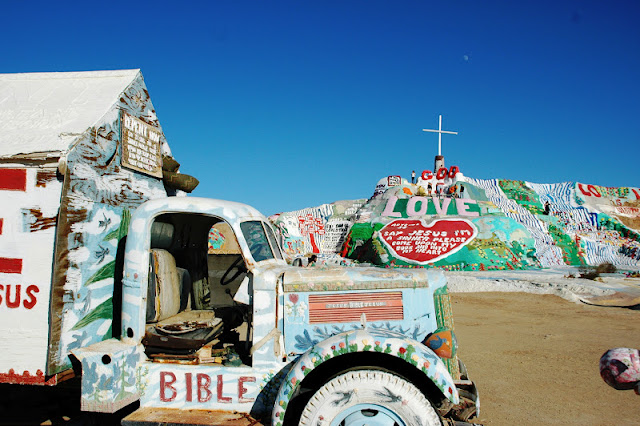 Just an alternate view of the same stuff. 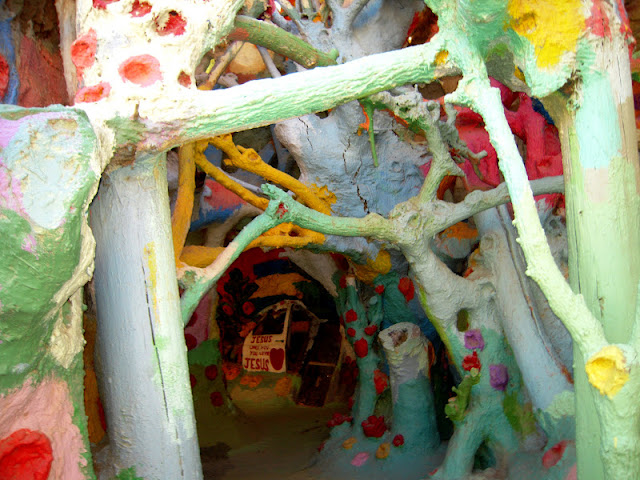 We've been at home for about three weeks and moss is starting to grow on us.  So, it's time to hit the road again. On Friday we are once again heading for the desert. Not this desert though. This time we'll be heading for the mighty Mojave Desert. We'll be staying (in our RV) near a town called Needles. Needles is very often the hottest spot in the United States. I can't say we'll be spending any time at all in the actual town though. There is much to see in this area. Our side trips should take us into Arizona and Nevada also.

UPDATE:
Leonard Knight, the creator of this giant work of desert folk art, passed away on February 10, 2014. Think what you will about his art, but you can't deny the man's dedication.