Many years ago
In the back room
Of a nondescript
Downtown Long Beach
Second story walk-up
We are legless
Leaning on pillows
Scattered on a Persian rug
Water-pipe bubbling
Black light
Exploding colors
From Day-Glo posters
Twinkies and Orange Crush
Calling to us
Someone says
"Rick, play that song!"
He laughs and says okay
For the fifth time that night
We listen to him play
And sing
"Here Comes the Sun"
All of us listening
All of us loving it
All of us with Chinese eyes 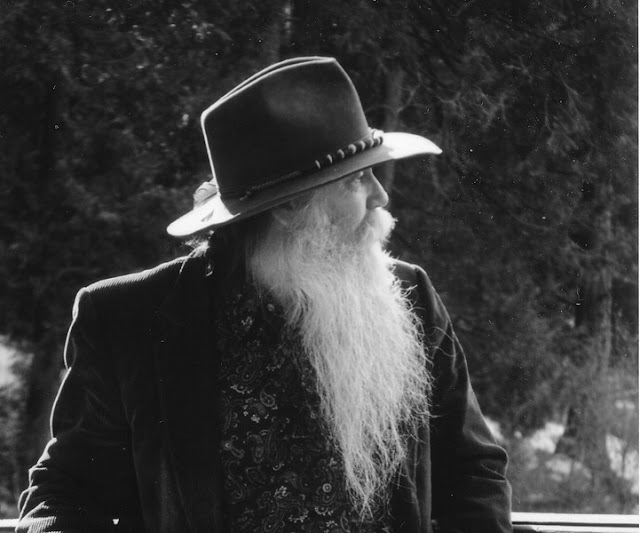 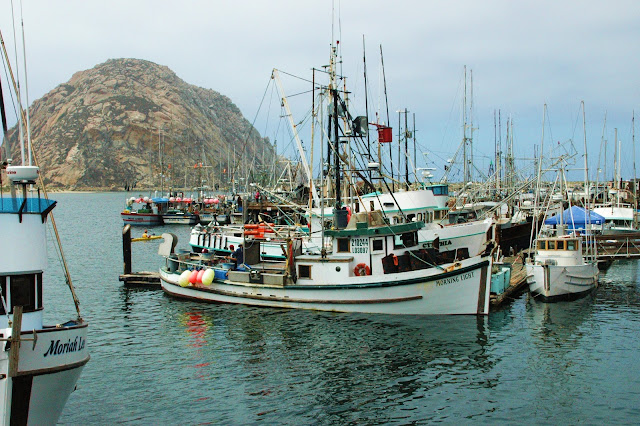 To see other top 10 picks, go to the great blog of Alex Cavinaugh.

There is no way I can narrow my list to ten. I'd have trouble cutting it down to 100. I omitted Beatles songs, because they might take up the whole list. Except for the first song,  the rest are not in any kind of order.

Time to Say Goodbye – Andrea Bocelli & Sarah Brightman  Link
This is the most beautiful song I've ever heard. I have NEVER made it through without my eyes welling up with tears.  They both did fantastic solo versions of this song. When they sang it together, it was pure magic. If you've ever seen the video it's pretty clear that when it is his turn to sing, Ms. Brightman stares at him like he's a pork chop.
Stairway to Heaven – Led Zeppelin  Versus Taurus (you be the judge).
If you are a Led Zeppelin fan, you've got to listen to the link. I'll bet you never heard the background story about this song before.  Not onlyis it my favorite rock song, it was also inspired by my favorite group of all time “Spirit.” On one of Led Zep’s first tours they opened for Spirit, who at that time played a song called Taurus. While some folks accused Led Zeppelin of Plagiarism, the author of the song, Randy California, replied that he was honored that Taurus may have inspired Led Zeppelin.
This is the End – The Doors  Link
There had to be at least one song by the Doors on my list. Some say the lyrics are satanic in nature. It sounds like dark dar poetry to me.
Free Bird – Lynard Skynard  Link
Classic southern rock with one of the all-time best guitar solos.
Comfortably Numb – Pink Floyd  Link
Probably the most attractive description of heroin usage ever written. Still an amazing song. If I could pick 100 songs, Pink Floyd would have a few songs on the list I thing.
In My Room – Beach Boys  Link
Hands down, the best harmony ever! Brian Wilson is one of the all-time most creative musicians. EVER...
Layla – Derek and the Dominos  Link
Duane Allman and Eric Clapton.  To me, it’s the best guitar dominated song of all time.
White Room – Cream  Link
Jack Bruce, Eric Clapton and Ginger Baker. I love this song not only because of the music, but because the music was created to encompass a poem by Pete Brown.   Every phrase is four syllables of Pure Genius...
In a white room with black curtains near the station.
Black-roof country, no gold pavements, tired starlings.
Silver horses run down moonbeams in your dark eyes.
Dawn-light smiles on you leaving, my contentment.
I'll wait in this place where the sun never shines;
Wait in this place where the shadows run from themselves.
You said no strings could secure you at the station.
Platform ticket, restless diesels, goodbye windows.
I walked into such a sad time at the station.
As I walked out, felt my own need just beginning.
I'll wait in the queue when the trains come back;
Lie with you where the shadows run from themselves.
At the party she was kindness in the hard crowd.
Consolation for the old wound now forgotten.
Yellow tigers crouched in jungles in her dark eyes.
She's just dressing, goodbye windows, tired starlings.
I'll sleep in this place with the lonely crowd;
Lie in the dark where the shadows run from themselves.
Posted by Pat Tillett at 4:00 AM 85 comments: 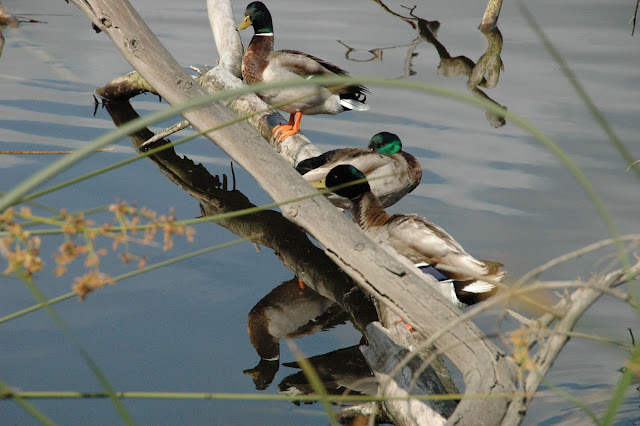 Weekend Reflections by other photographers at Newtown Area Photo.
Posted by Pat Tillett at 4:00 AM 59 comments:

A short time ago, I read an interesting post at Clarissa Draper's blog Listen to the Voices. The subject was the difference in cost (or lack of) between digital books and printed books. My comment was going to be at least as long as the post, so I decided I'd make it into a regular blog post here.
--------------------------------------------------
I'm writing this post as a consumer who likes to read.
An ebook, while less expensive than the paper version, is in many cases over priced. Add to that fact, newly available and rapidly improving technology and it shouldn't take a genius to see what is about to happen.

Let's face facts. Books cost too much now! Even "used" book stores have jumped on that bandwagon by raising their prices. Still cheaper than new, but not that great of a deal anymore. I'm fortunate to be able to buy what I want, but not everyone is still in that boat. I'm just tired of being gouged.

A question...
What's the difference between Border's and Tower Records? The answer is simple, Tower Records is history! The big box book stores are soon to follow. There is simply no need for them anymore.

It's evolution! Just like music, words can be downloaded. I love holding a real book in my hand just as much as the next guy. I also loved holding an album cover! I got over it.

Unfortunately, technological evolution will soon solve the problem for us. The vast majority of books will soon become unavailable on paper. Unless you are willing to pay a high premium for them.

LP music albums are still available also. I think I'm going to head on down to Tower Records to buy one. Oh yeah, they went out of business. I guess I'll be FORCED to download it.

Pretty soon there isn't going to be a choice. The same things being said about "real" books now, were being said about records in the not too distant past. The major book stores that make their living off of new releases are closing! Soon, they will be gone. It's the way of things! Will we be able to buy "real" books? Yes we will, but it will be at an elevated cost, just like records...
Here is a partial list of music and record stores that have closed. Of course there are hundreds of smaller independant stores that have also closed, but I dont have the room or resources to come up with all the names.
.
kindle, big business, book publishers,
Posted by Pat Tillett at 4:00 AM 87 comments:

Labels: current, Is it just me? 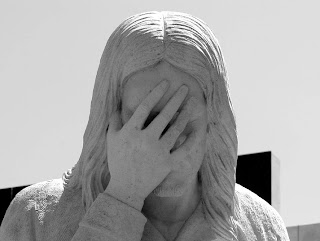 Eleven hooded men
Eerie in the glow of torches
Within their circle
A young black man kneels
Arms bound behind him
His bloody face a mask of terror
His grandfather, beside him
Wearing the face of Jesus
As he passively awaits his fate
The dripping southern night
About to snatch another bit
Of our humanity
Whipping now done
Twin nooses await
Warm summer rain
Tears of those
Who have gone before them

Weekend Reflections - Too Many Taylors 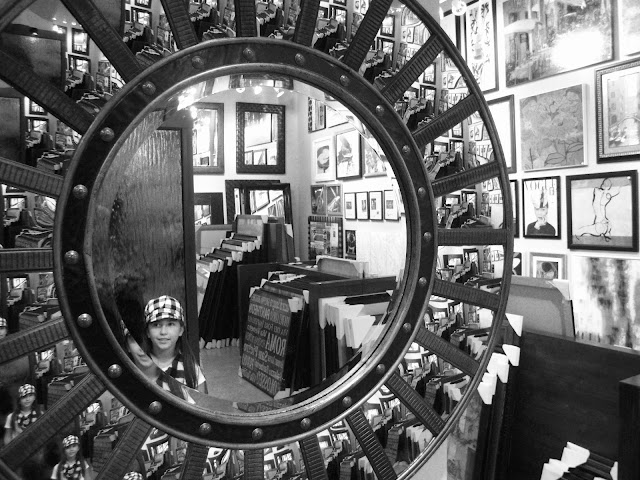 Weekend Reflections by other photographers at Newtown Area Photo.
Posted by Pat Tillett at 4:00 AM 53 comments:

Now that Christmas is Over

As a child brought up in a very poor and dysfunctional family, I hated Christmas. I hated it because it always led to sadness and conflict. There was no illusion about Santa Claus in our house, because my mother made sure we knew the truth as soon as we were old enough to understand.

After many years passed and I had a family of my own, I eventually learned to tolerate the holiday season.  Now I have grand kids and a larger family and I really do enjoy it. I enjoy it primarily because it allows our family and friends to get together. It took a long time, but it finally feels good to me.

Having said that, I'm not fooled into thinking that the entire Christmas season is now based on anything other than businesses of a thousand types, getting their hands into our pockets.  I swear to you that my local mall started playing Christmas music the day after Halloween!

I'm saying this in a general sense, because of course there are many folks out there who see it as a time of giving and helping others. I commend them, but from what I hear and see, it's mostly about commerce these days.  Or is it just me? 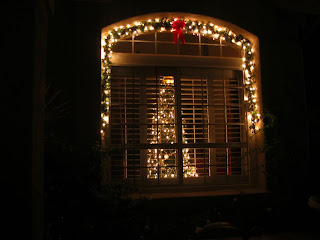 High atop the ridge line 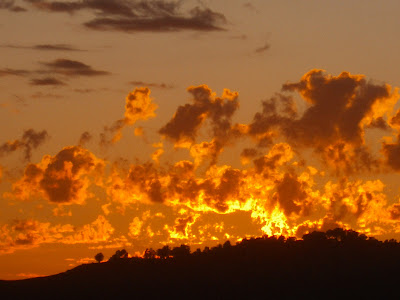 Weekend Reflections - On The Lake

Although I took the following photos in Laguna, they aren't really related to the storm damage. 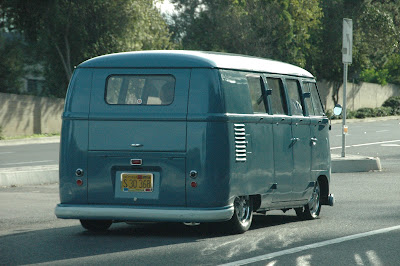 Always a fairly common sight around Laguna. First it was hippies and now it's surfers. 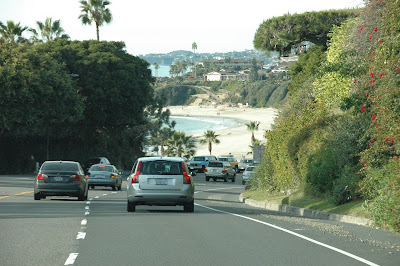 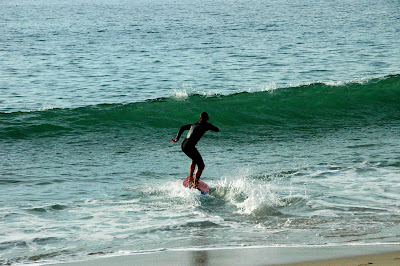 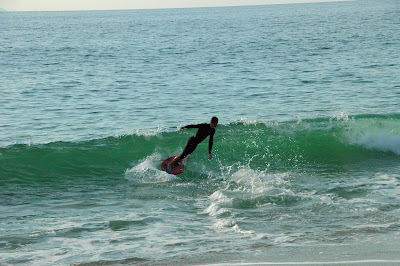 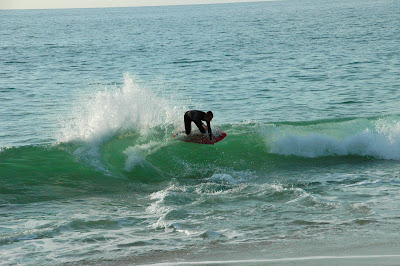 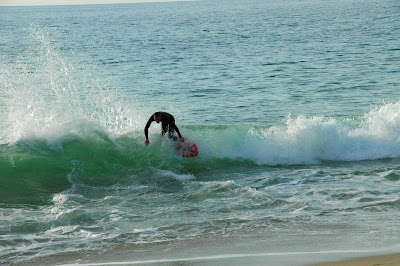 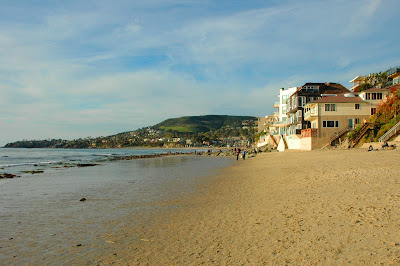 Walking towards Main Beach and downtown 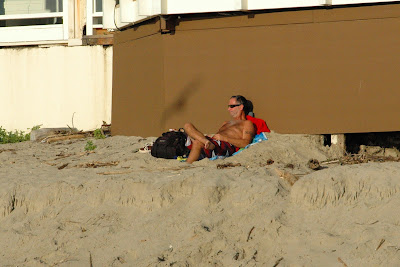 It's under 60 degrees and this moron is sunbathing! A little bit of the storm surf damage to the right. 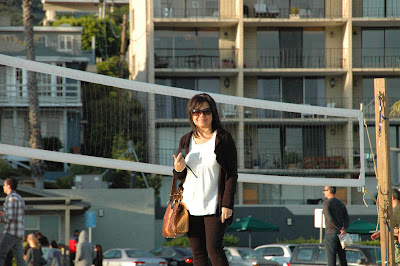 She loved the photo, but wasn't happy that I didn't show her new boots. Really? What's the matter with you people? 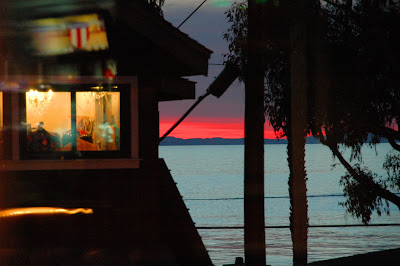 The view from our table while eating at Olamendi's Mexican food. The land in the background is Catalina Island. It's 30 miles offshore.  The Chicago Cubs used to hold their spring training there.

After the Storm - Laguna Beach

About two weeks ago I posted Big Doings in So Cal. As you already know, there was a lot of storm damage here. Yesterday my wife and I went downtown to check out how the repairs and clean up was going. 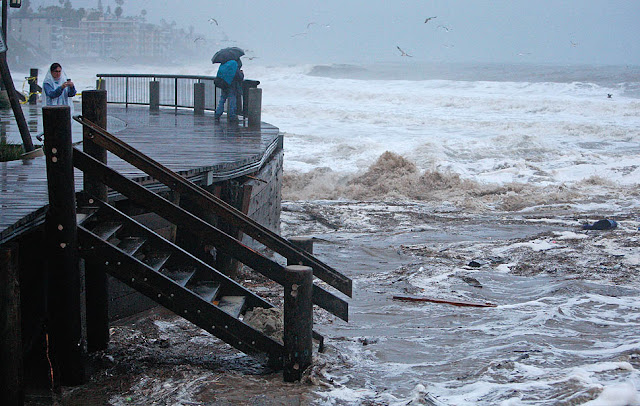 The morning after the storm (photo LA Times) 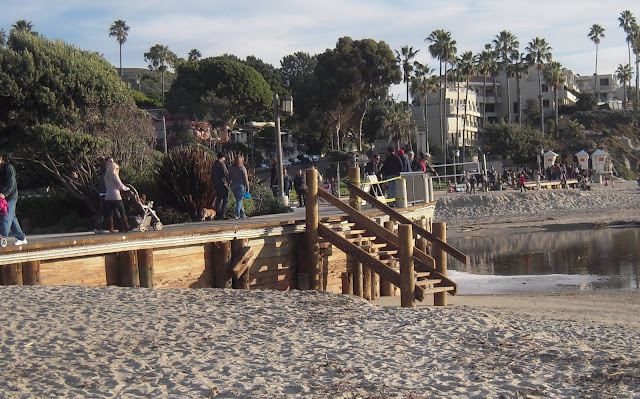 Yesterday - A major chunk of beach is gone... 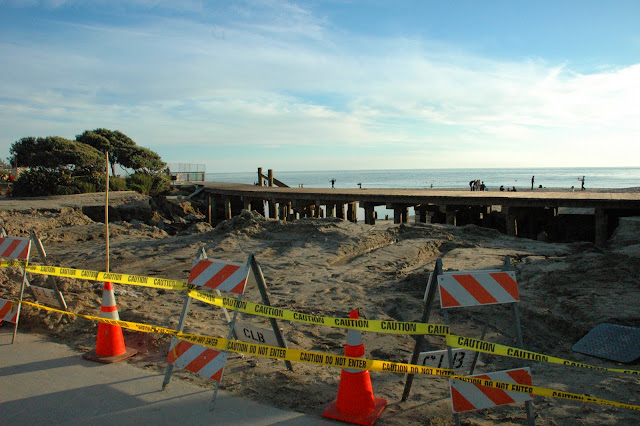 Same view as above, but from the street. A large chunk of lawn and sand are missing. 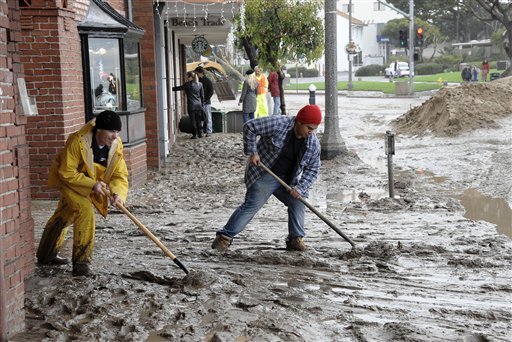 And this is after the dozers moved most of the mud. (LA Times) 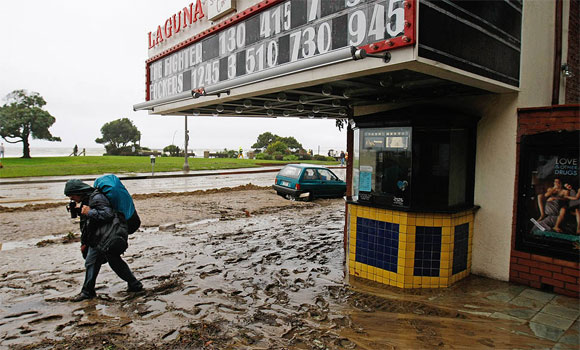 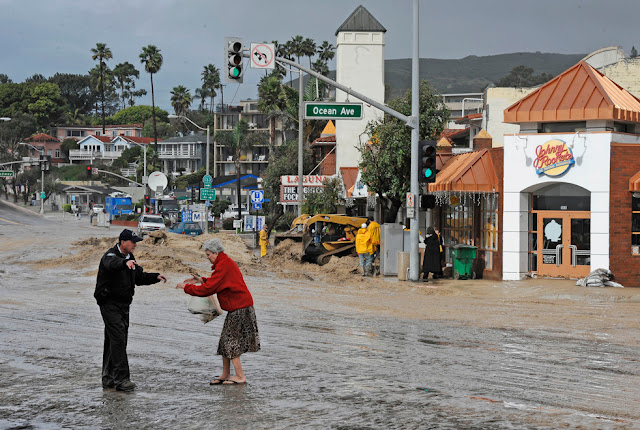 What are you doing out here lady? (LA Times) 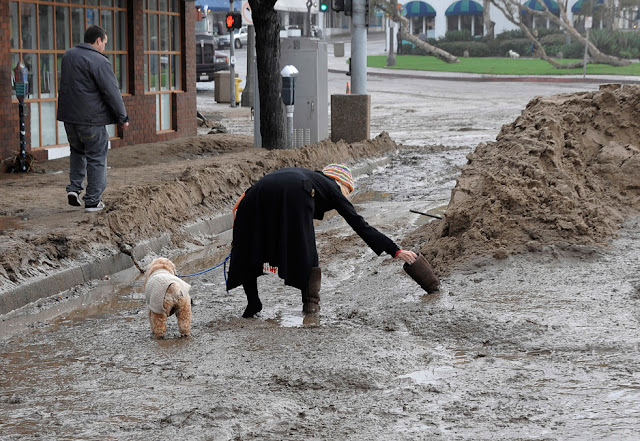 This is the same spot as the flood video in the earlier post (LA Times)
What a dufus! 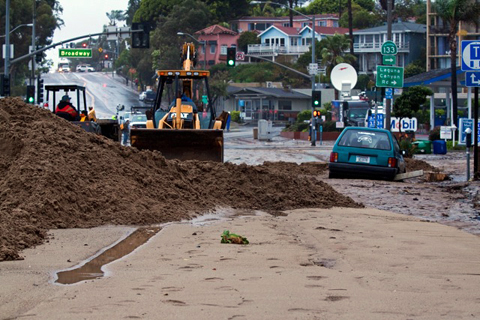 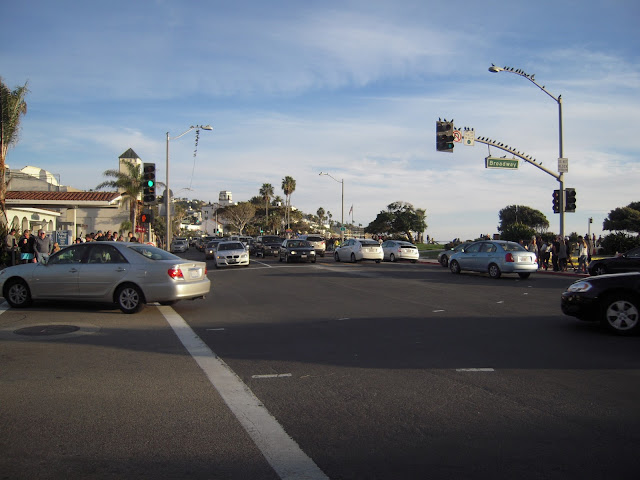 
A lot of folks had the same idea as we did yesterday. It was the first nice and clear day in a few weeks. Pretty cold (by our standards), but that didn't stop a lot of people from coming out.  About 12 days ago this intersection was under a flood of mud and water. It's amazing how they managed to get it all cleaned up so quickly. Also very surprising was the fact that almost every store was open for business.   I guess when your city's main source of income is tourism, you don't waste any time. 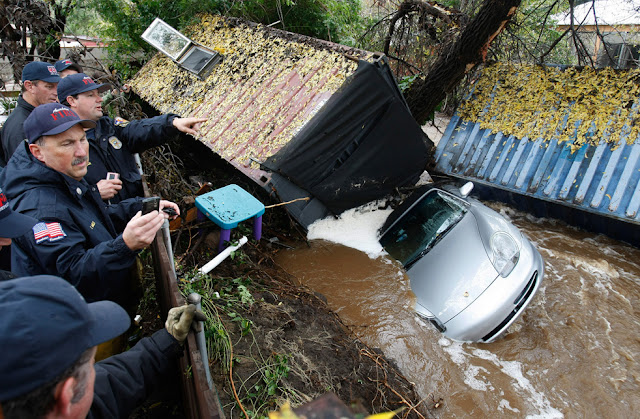 This stuff didn't quite make it to the ocean (LA Times)

On Wednesday I'll post some non-storm related photos from Laguna.
.
Posted by Pat Tillett at 4:15 AM 71 comments: