The Pinto Basin is about 250 square miles of what most people would refer to as barren and desolate desert. The main park road skirts the edge of it, but rarely does a car stop for anything more than a quick glimpse around. At first glance, you would think it to be a very formidable wilderness. You wouldn't be wrong in the slightest bit. Especially so, during the summer months. This is the hottest and driest area in the park, and those conditions have cost people their lives. I believe three in the past year alone. 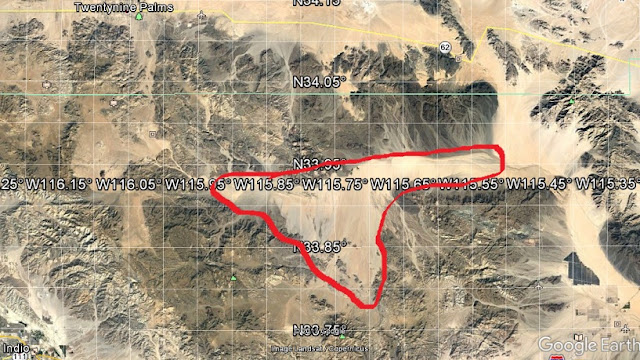 The basin is outlined in red. The three surrounding mountain ranges are also desolate. It's hard to believe now, but this area was once lush, swampy, and even had water flowing through it. Clearly, that was a long time ago. 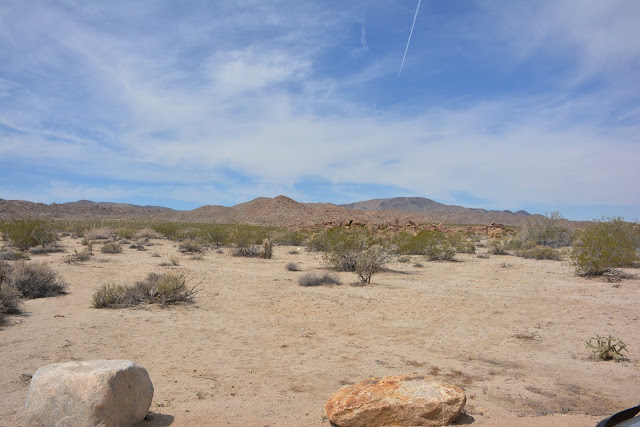 In almost all cases in the desert, where there was water, there was also people. It was no different here. They didn't leave a lot of evidence, but they did leave some! We'll get to that in a minute. First, a few pics of the beautiful (in my eyes) scenery. 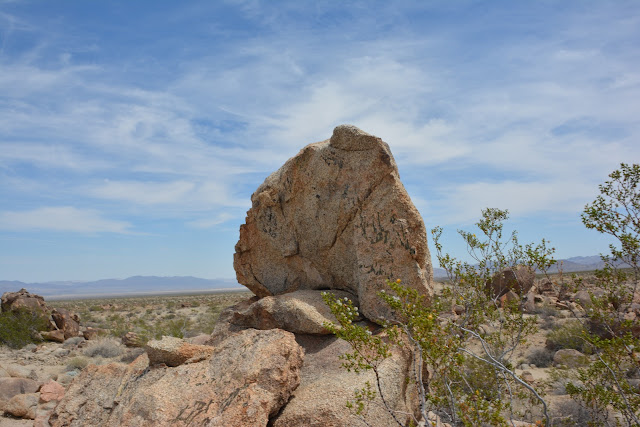 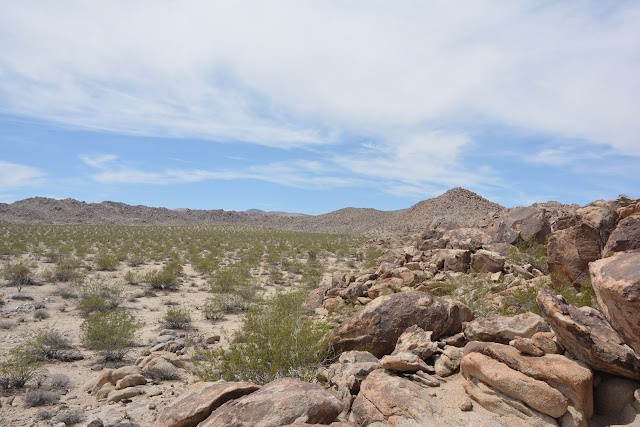 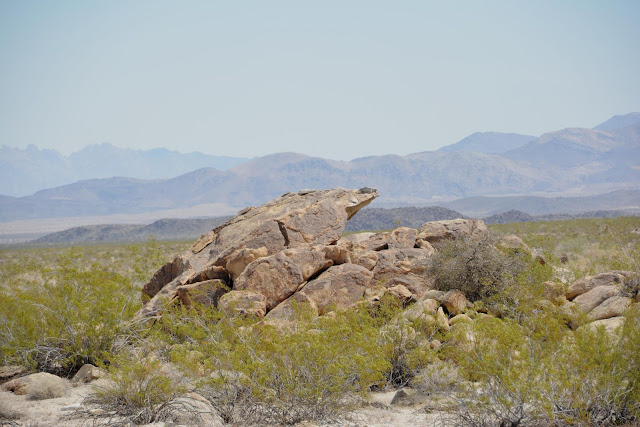 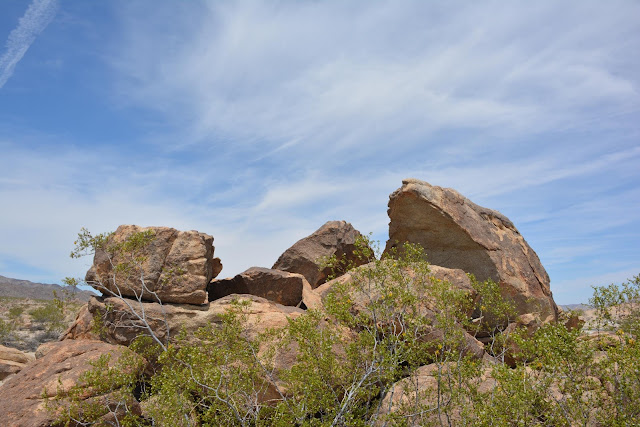 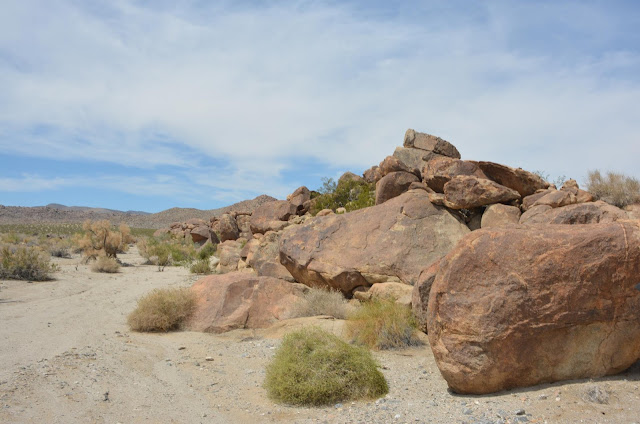 Now to the petroglyphs. We were traveling down Porcupine Wash (still in Pinto Basin), keeping this rock jumble on our right. Our destination is that dark rock (that looks like Pac-Man) just to the left of center. 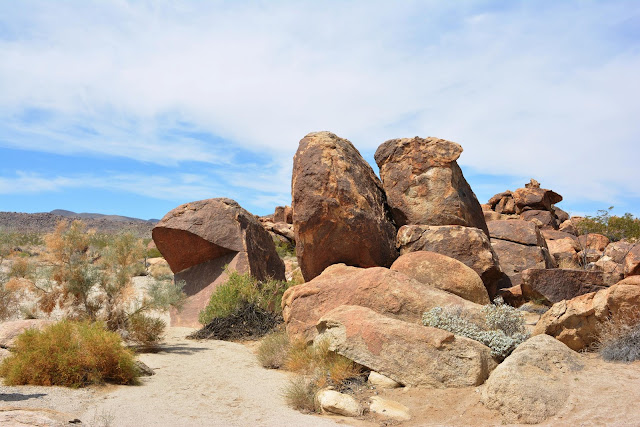 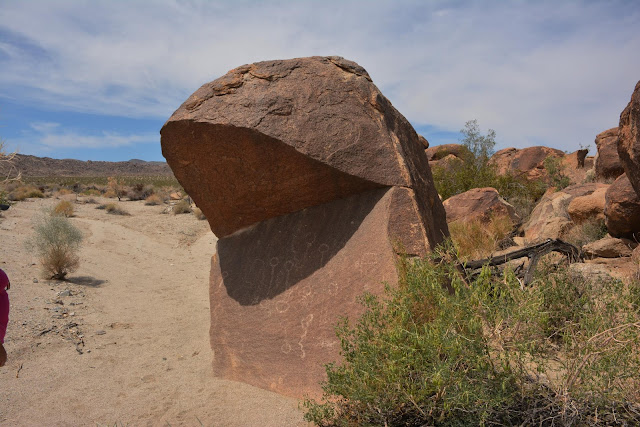 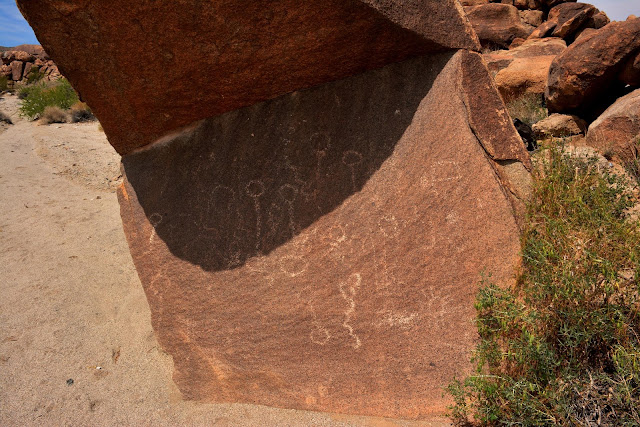 There! If you saw my last post, you will see that the petroglyphs on this rock very much resemble the ones included there. These are in much better condition. In additions to the barbells, please note the faint "sunburst" image near the brush on the right side of the photo. 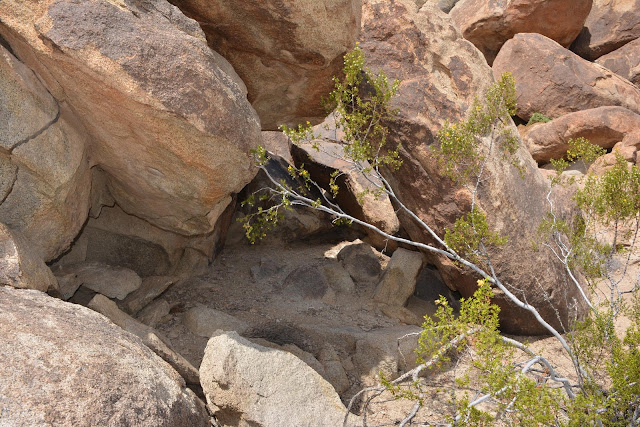 There was also a nearby rock shelter. There was soot on the overhanging rock to the right. I don't know when this spot was last used, but I'm pretty sure it was a long long time ago. 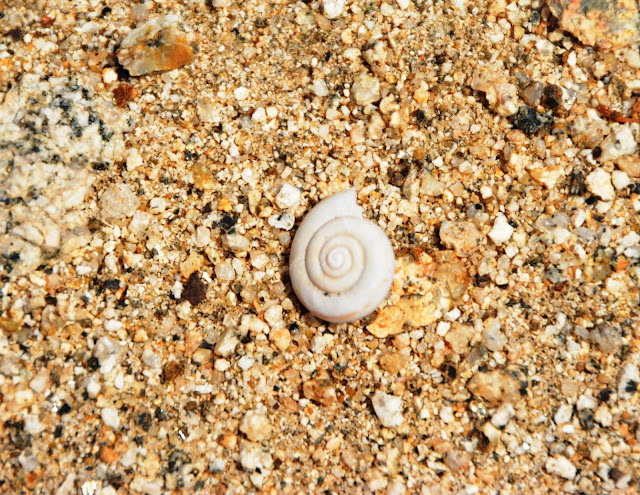 My favorite find of the day was this fossilized shell. I believe it's a freshwater snail (fossil) I was amazed that it was still intact. I moved it into a safer spot and hope it survives for a lot longer. 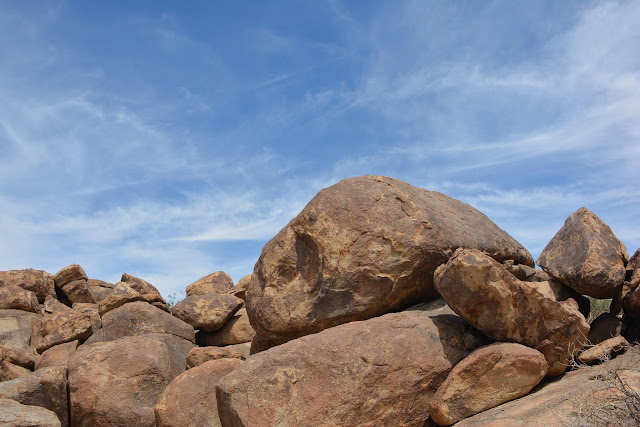 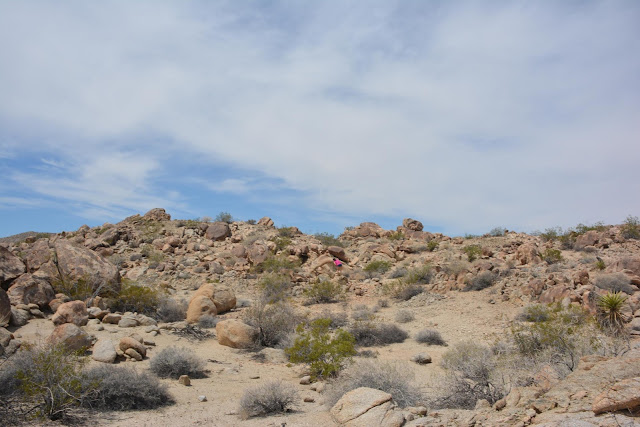 In the middle of this photo, you can see my wife exploring. 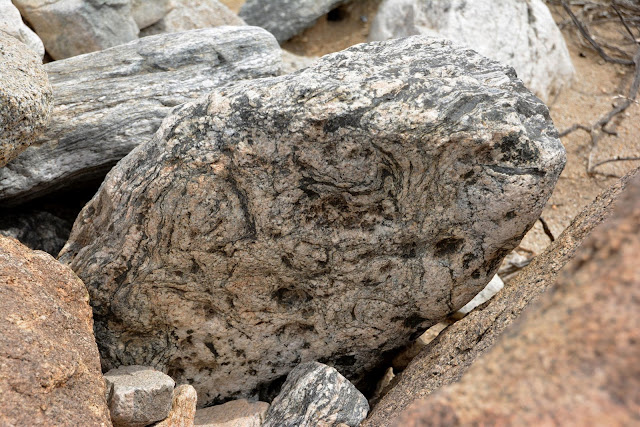 I believe this rock material is called Hornblende. 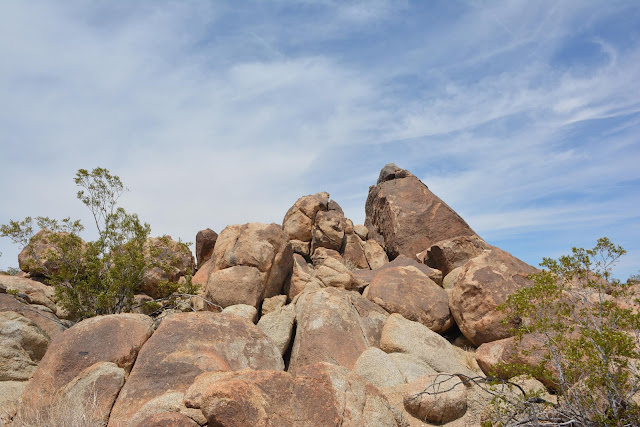 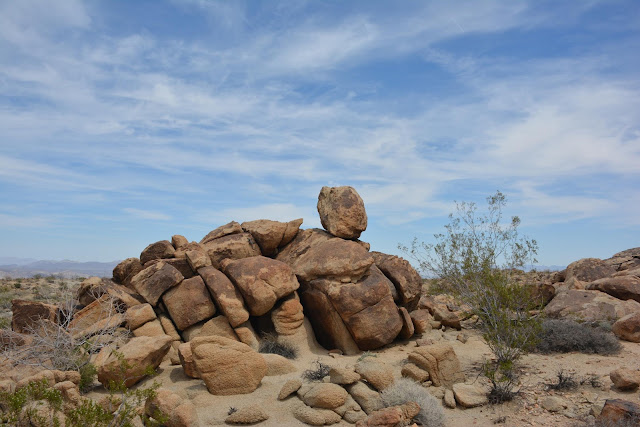 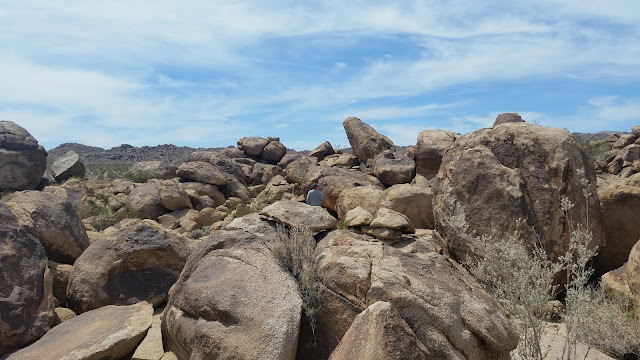 It wasn't easy getting into the middle of this jumble of rocks, but there I am.

Although this isn't a large site, it is noteworthy because of the type of petroglyphs that are there. Plus, it is in an absolutely gorgeous and rugged area.

From here it looks like a nice and easy hike across this valley. That thought ends in about a hundred yards... 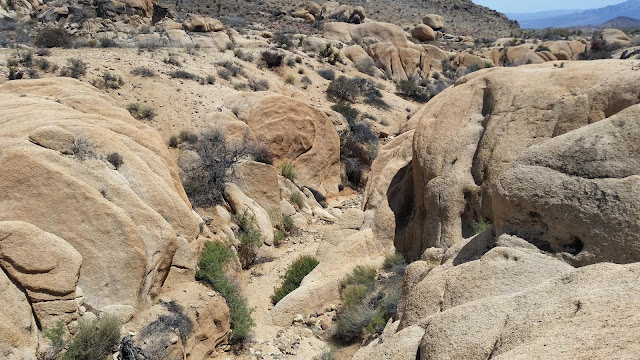 ...when you run into this! Climbing down into, and then up out of this is actually the easiest way to go. During major storms, water rushes down these little gullies at amazing speed. Not a place you want to be stuck in. 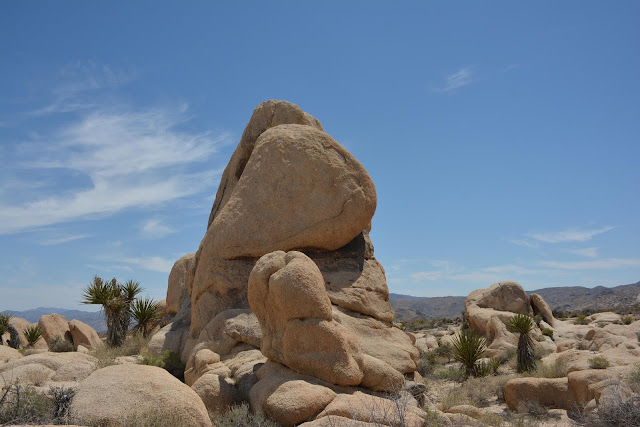 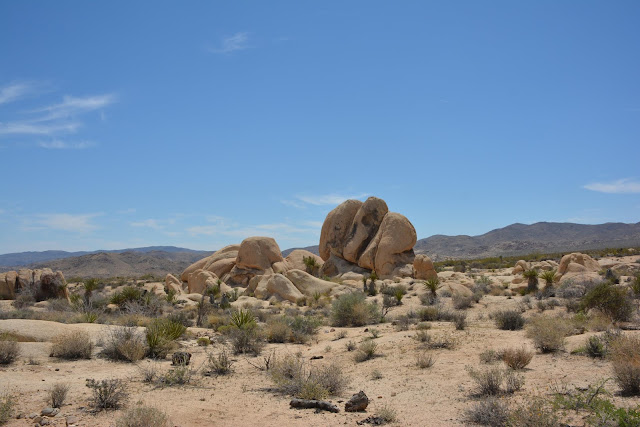 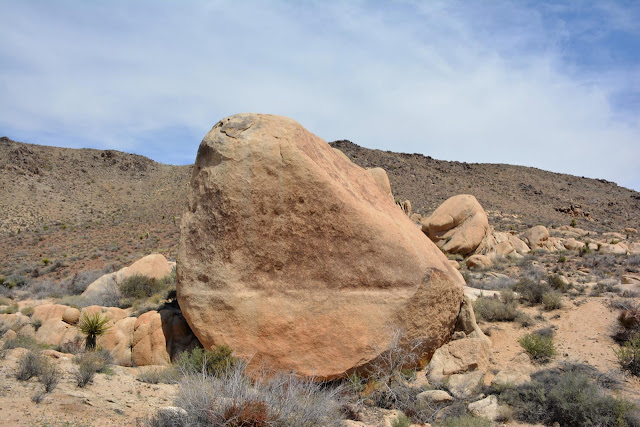 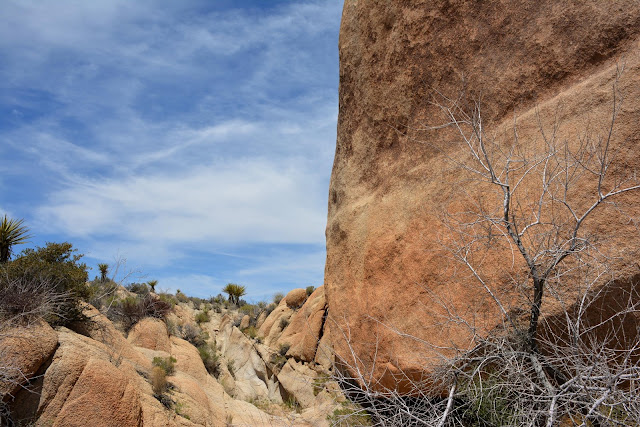 This rock is our destination 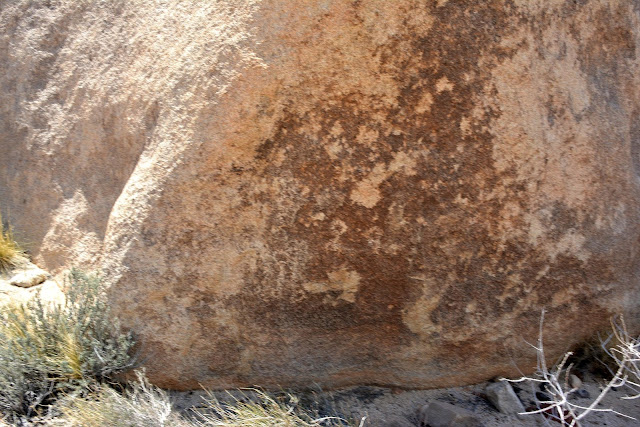 Although there aren't very many of them remaining, the predominant petroglyphs at this site are the "barbell" looking symbols. 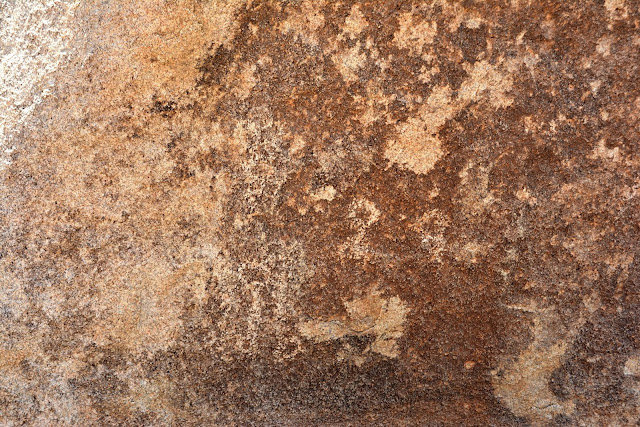 There are many opinions relating to what exactly the "barbell" symbols represent. My granny told me that it represents a meeting between two people, or two groups of people. If there is a third circle in the middle, it represents a third party acting as an intermediary, or mediator. I believe her... 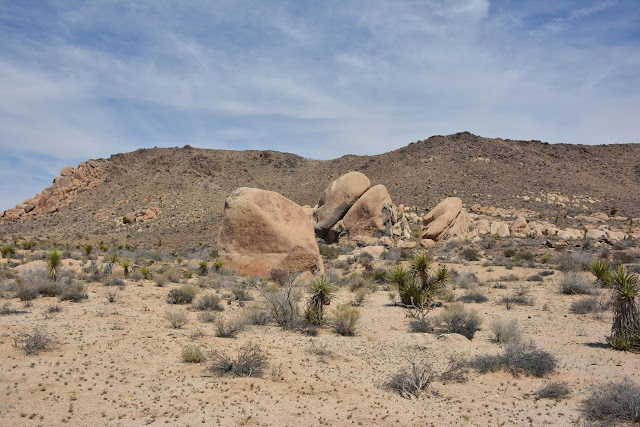 It's always nice when mother nature graces us with a few clouds for our photos.