In my last post, I only showed you the stars of the show. This post includes the rest of what I saw. When you put it all together, it adds up to an amazing and mind blowing experience. One of the most thrilling things about it was, the total and absolute absence of human footprints. 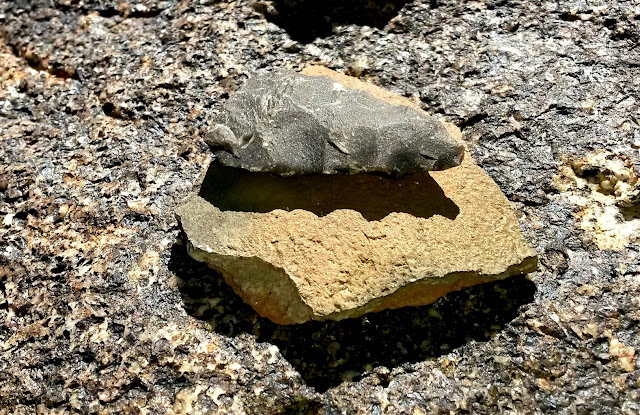 This two inch granite "point" (arrowhead or spear) was sitting on the ground in clear view. I placed it on a pottery sherd/shard to get some contrast. You can clearly see marks on it, that were left when it was transformed from a rock, into a tool. I put the pottery shard back on the ground where I got it, but the point was put where somebody just hiking by couldn't see it. Then, I kicked some dirt over it. Like I've said many times before, out here it's an awesome bit of history, but taken out of that location, it's nothing but an interesting rock in your sock drawer. Maybe even worse, it could become one of thousands of other points in a bag or box, locked in the back room of some NPS, NFS, or BLM office. 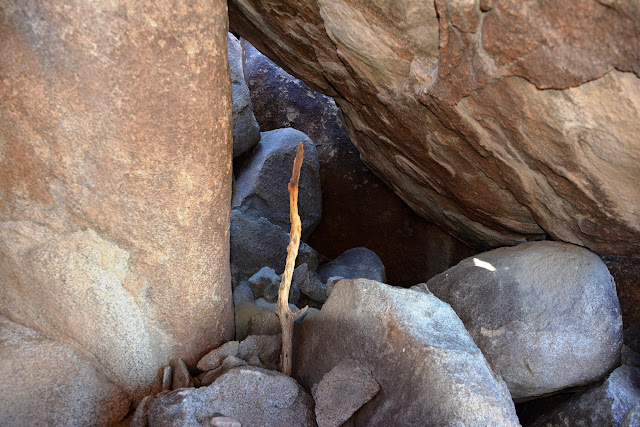 Another rock shelter and another spirit stick 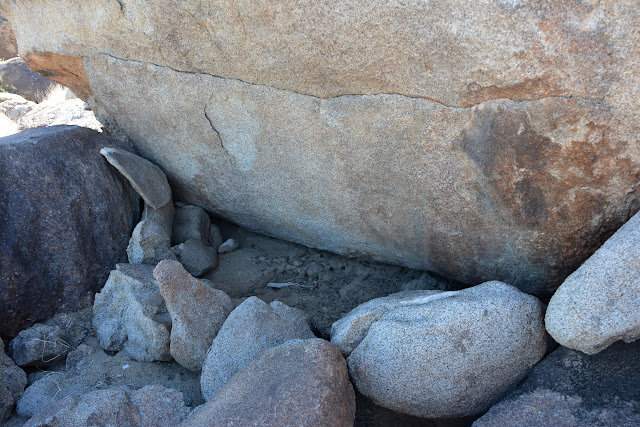 I can't tell you the exact purpose of this, but it was clearly arranged by somebody a long time ago. 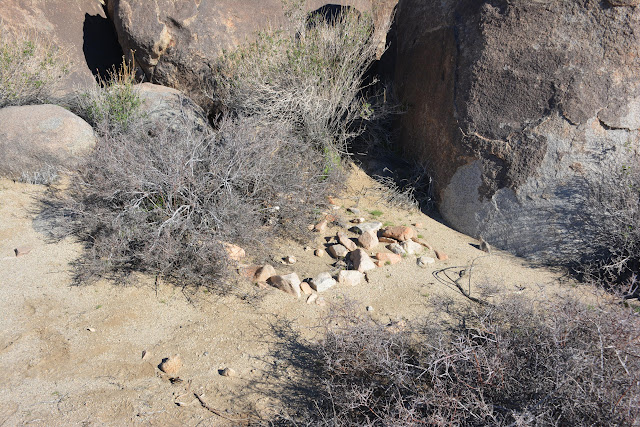 Another man-made rock arrangement. If the bush wasn't there, you could more easily see that it is, or was a circle. 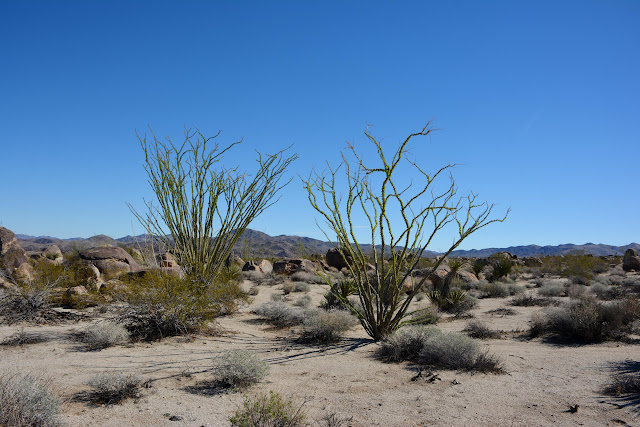 The Ocotillo were very green and healthy looking 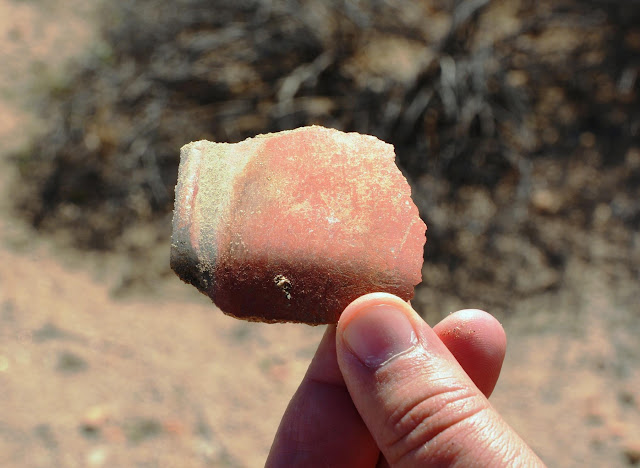 A shard that was once part of the lip, on of a piece of pottery 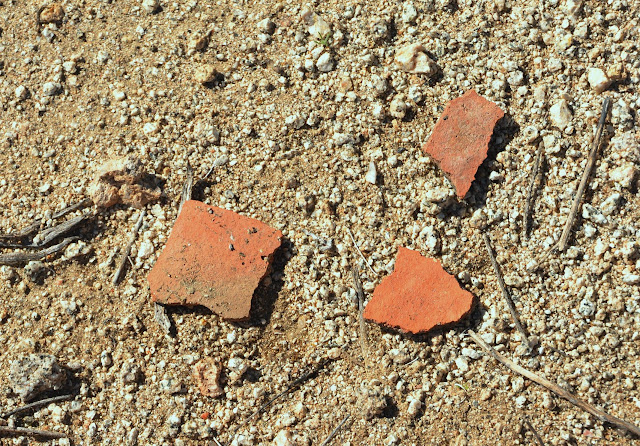 Shards were all over the place. 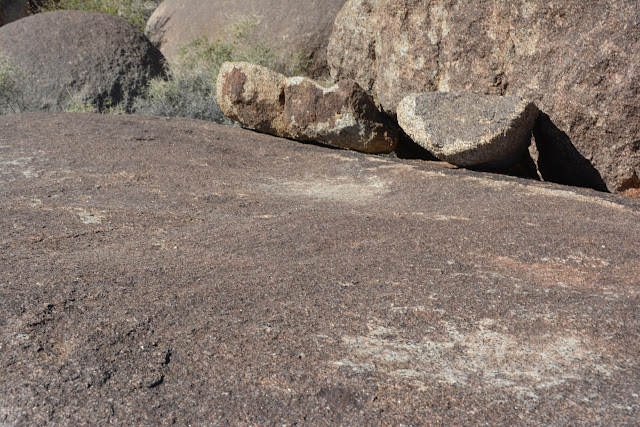 This large boulder had a couple of spots that have been worn smooth by grinding seeds, or other food items with a handheld rock (Mano). These spots are usually called slicks, metates, or a milling stations. 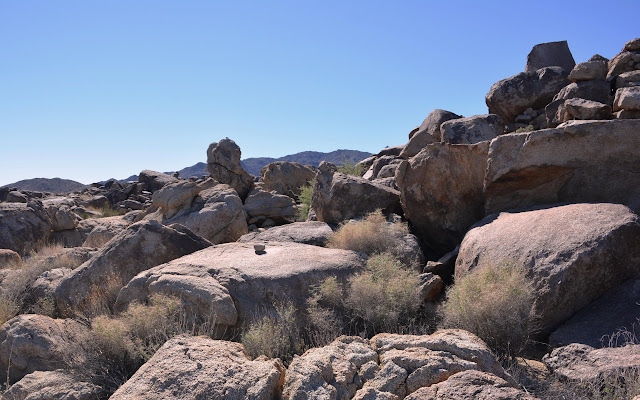 A little later we saw another one, that still had a Mano sitting on it. 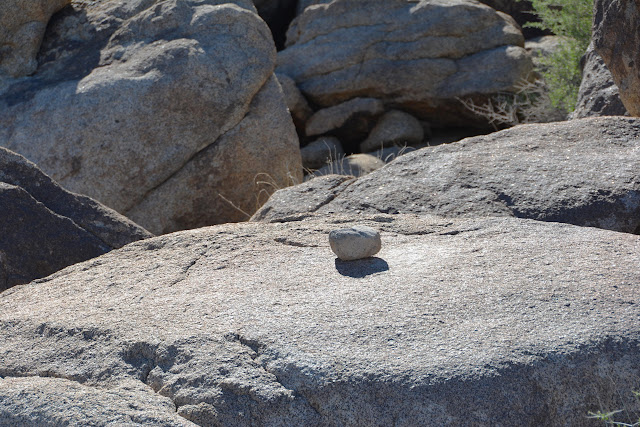 Both the bottom of the Mano and the little concave portion of the large rock were worn smooth. I'm not saying that this Mano has been sitting there for hundreds of years, but maybe it was! To see the smooth spots on the large rocks is fairly common, to find the Mano, even just in the area, is very rare. 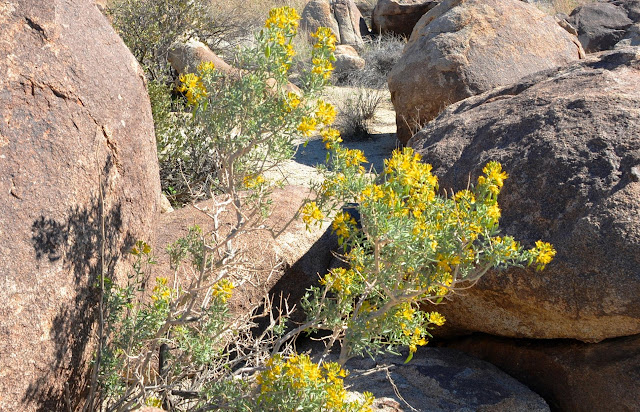 Just because I liked it 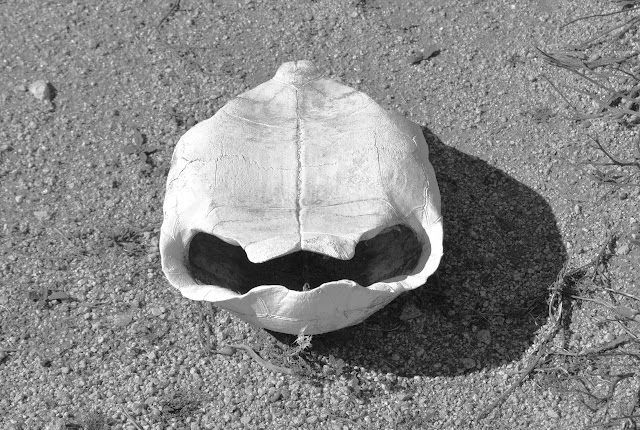 The obligatory black and white. This was a large desert tortoise. 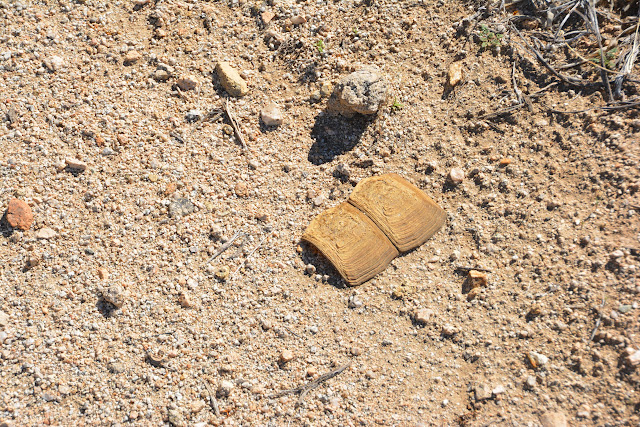 A couple of what I believe are called scutes. They cover the tortoise shell. 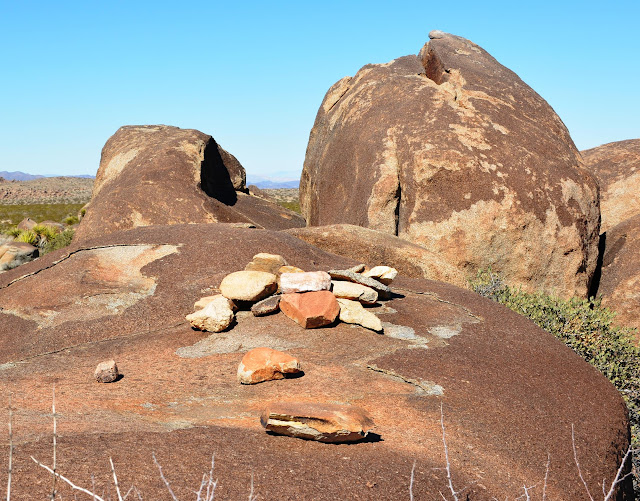 If you stood on a higher level, you could more easily see that this arrangement of rocks is in the shape of an arrow. It looks to be a little messed with, but it is clearly an arrow pointing through the notch in between those large rocks. I wonder what it is pointing at. Next trip... 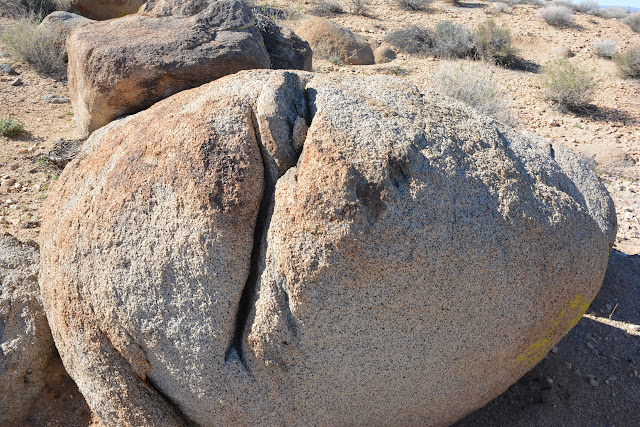 Yoni
Maybe some of you remember that a Yoni, is a female hoo-hoo, fashioned out of a natural crack in a rock. If you look at the bottom of it, you can see the tool marks. The tools were made of harder stone. These are fairly common in the southwest. 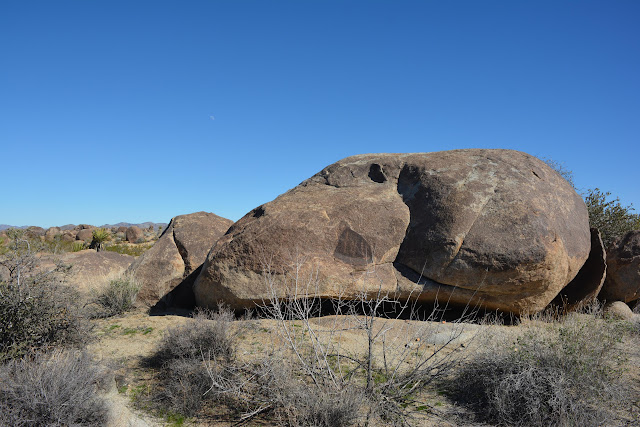 I think this large boulder looks like a Desert Big Horn Sheep head (sort of). 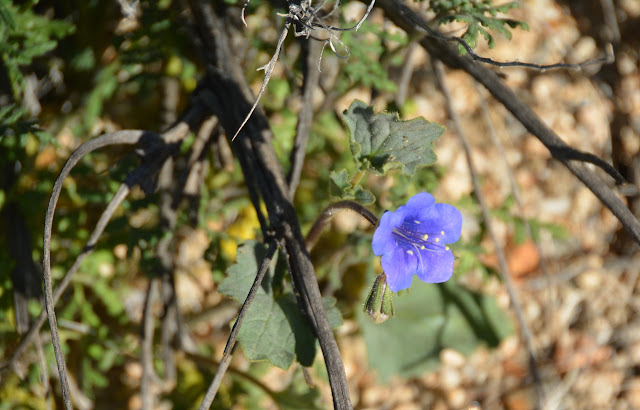 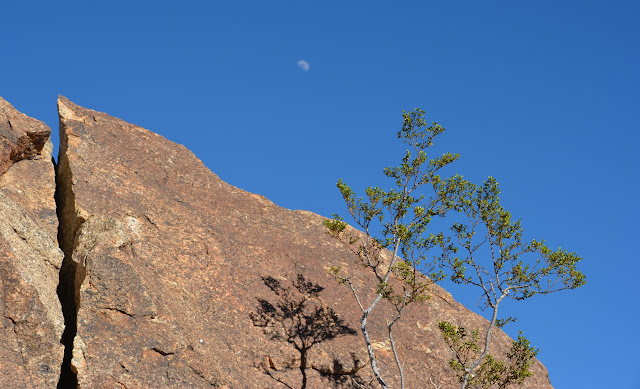 Always nice to see the moon in the middle of the day. I think it completed the photo. Of course it might just have been a smudge of chicken salad on my lens. 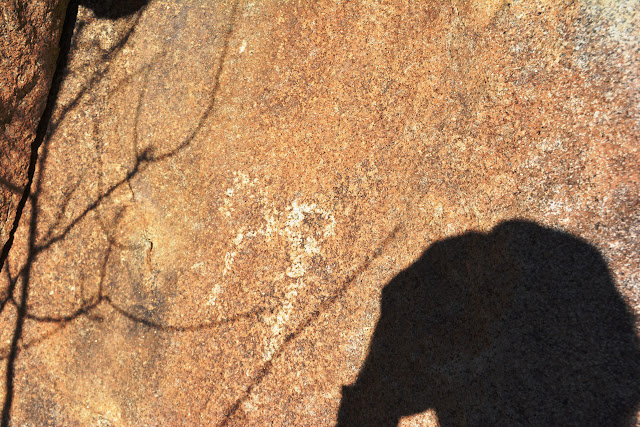 And of course, there were also some petroglyphs nearby. 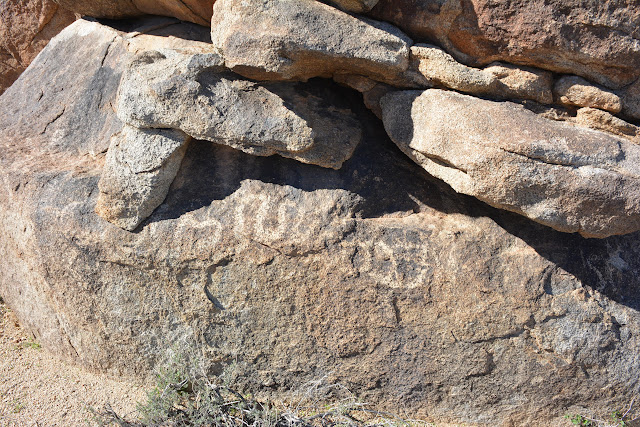 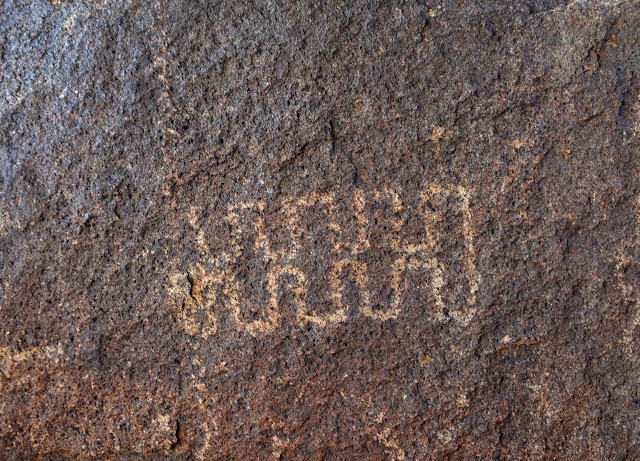 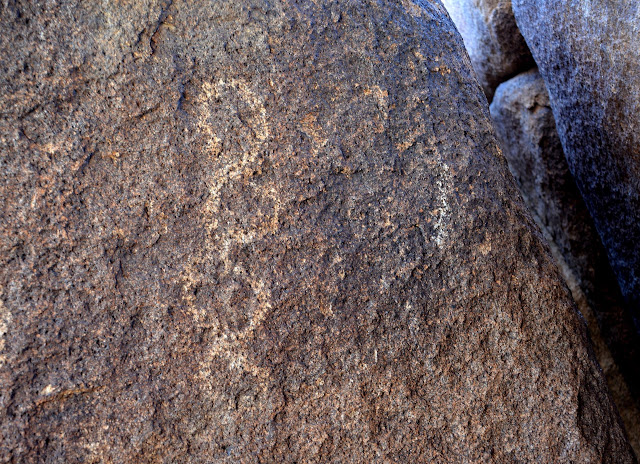