Handprint pictographs are always a treat for me. I think it's because normal pictos and petros are made with tools. Handprint pictos are created from the actual placement of the hand on the surface. When compared to most other symbols, handprints seem very personal. In my mind's eye I can picture the person placing their hand on the rock. The "rock art" in this area are estimated to be about 1,000 years old. That is seven or eight centuries before the first white settlers started arriving. 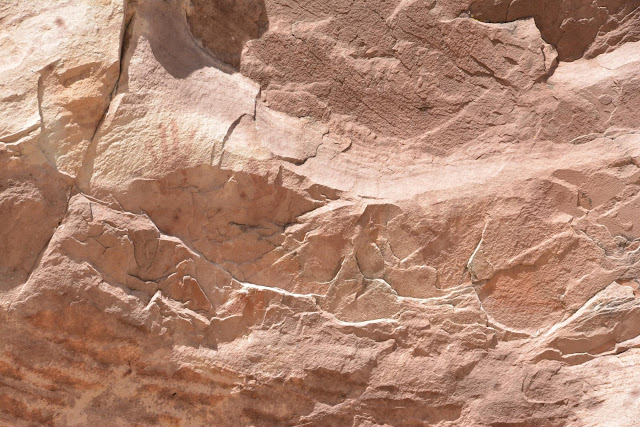 You can barely see them with the naked eye. 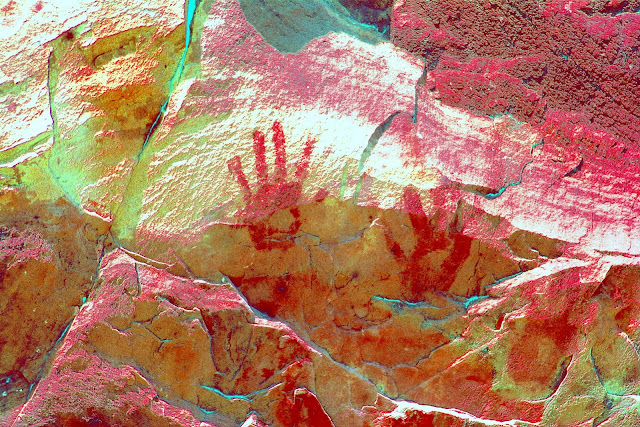 With DStretch much more is revealed. Notice where the middle of the palm didn't make contact with the rock. 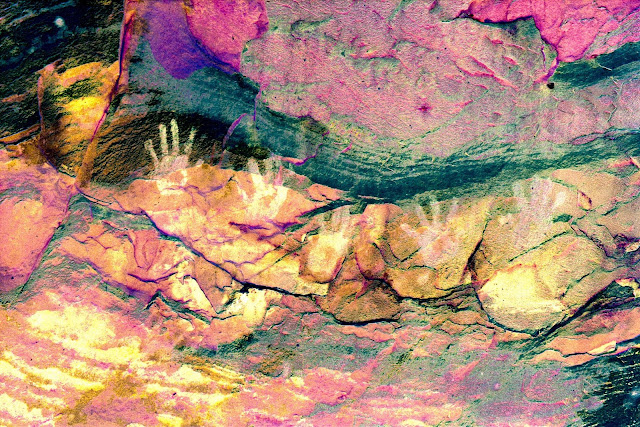 This one shows five handprints. 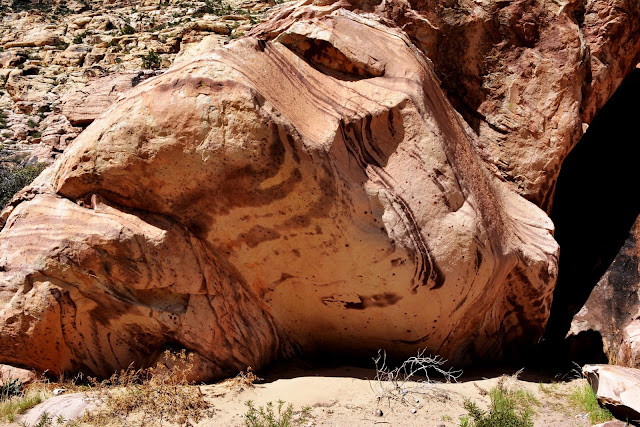 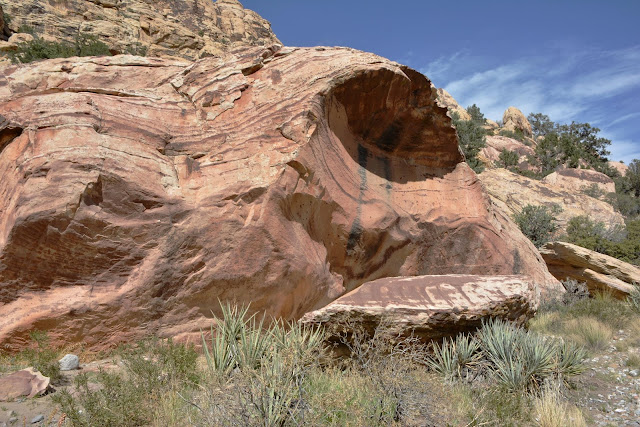 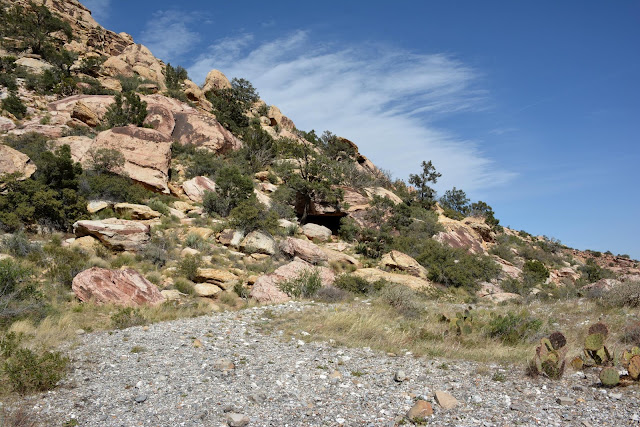 The rocky surface is a very large, or multiple Agave roasting pits. 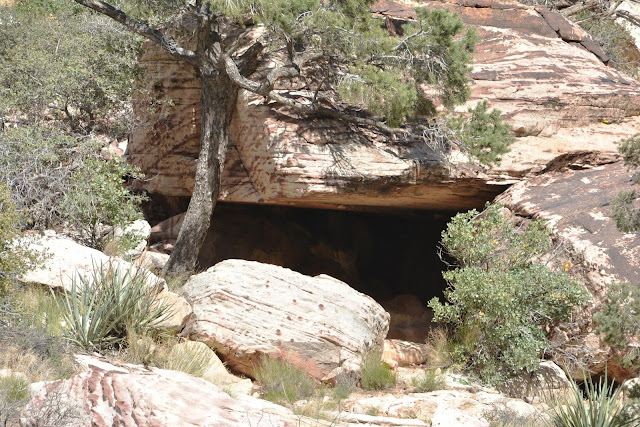 This pictograph site is in the same area as my last post. We like auto-touring, but love getting out of the jeep and exploring much more. This site isn't a secret, but we saw very few people while hiking around. 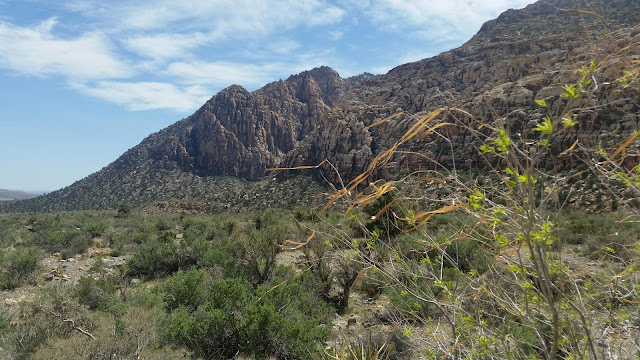 The view from where we parked the jeep. 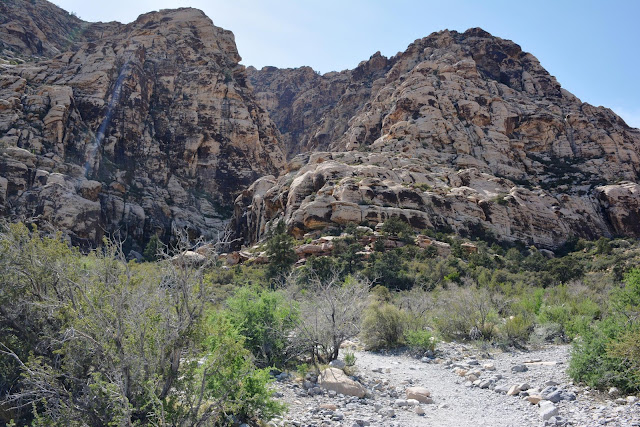 Straight ahead to our intended target. There is a waterfall at the end of the canyon on the left. I'll cover it in another post. 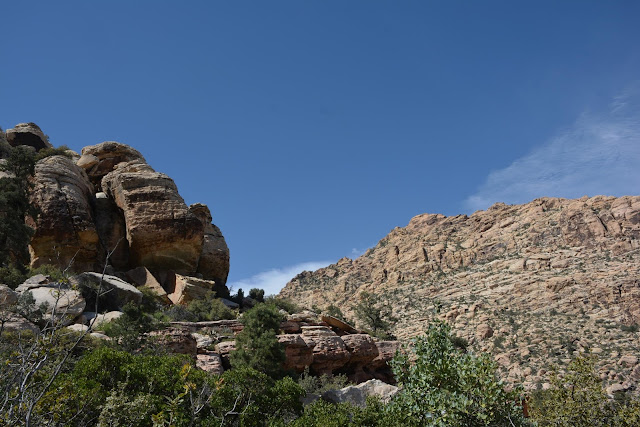 In the bottom center you can see some rock shelters used by the original inhabitants. 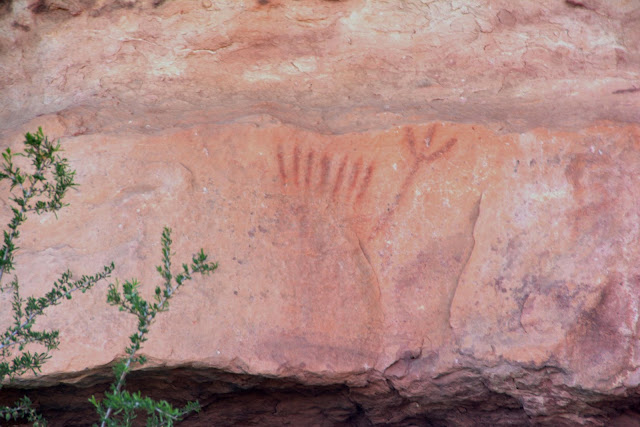 The first pictograph we saw here. 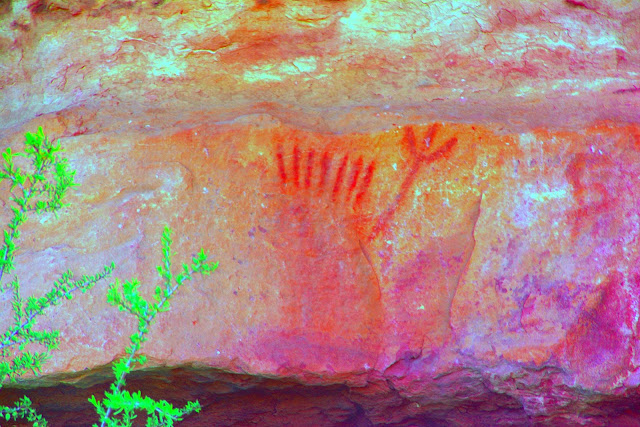 Same pictograph enhanced with DStretch. It would have been nice to see it before it started fading. 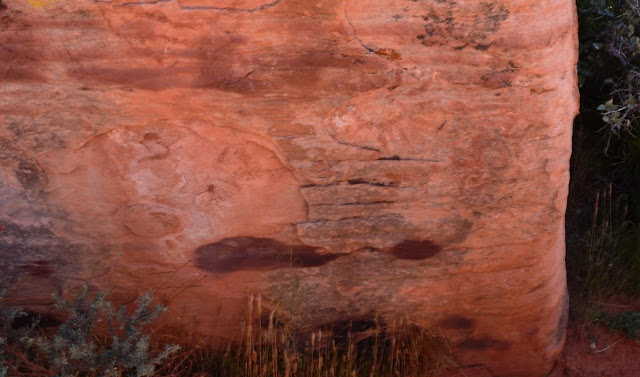 Hard to see anything on this wall. 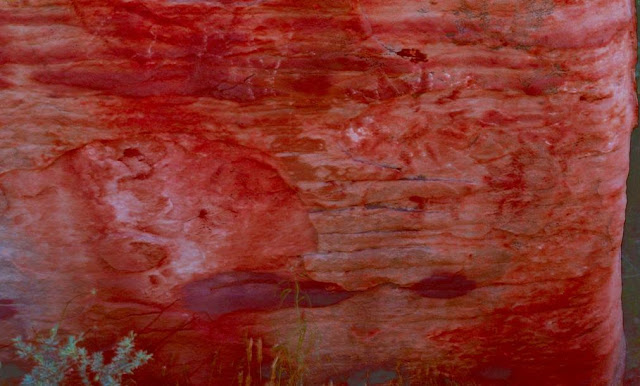 Not much better after enhancement, but there is a nice sunburst and a few other images. 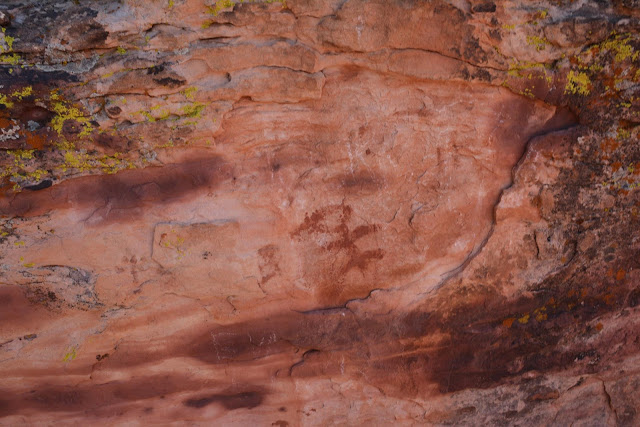 Self portrait of the original owner? 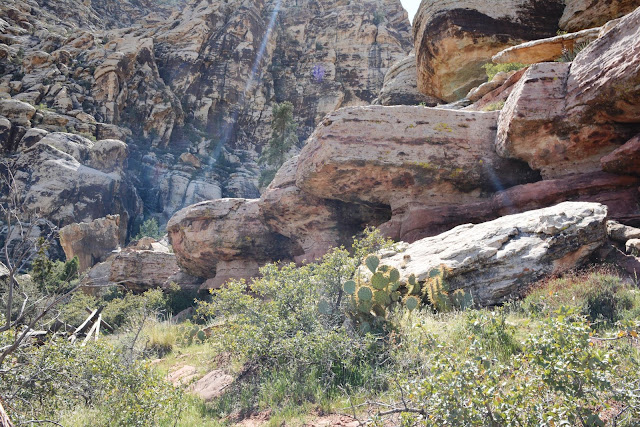 A closer look at the rock shelters. 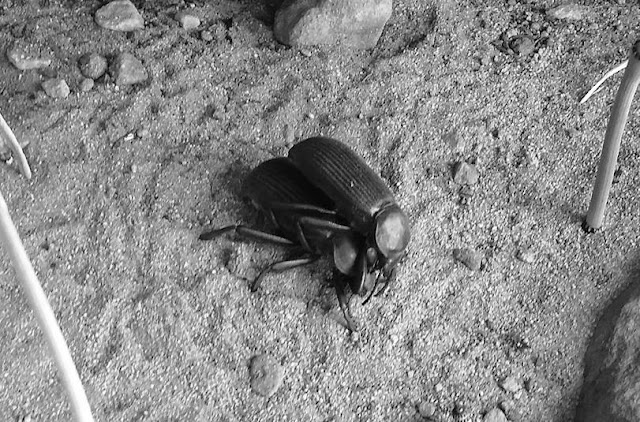 Excuse me! Can you two get a room please? 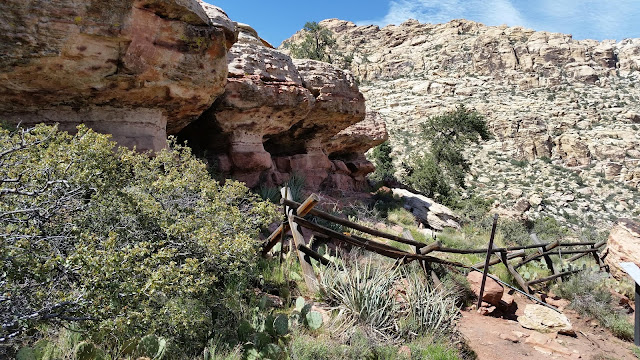 Rock Shelters. I'm not sure how much "barricading" these barricades actually do, but I don't blame them for trying to keep people out. 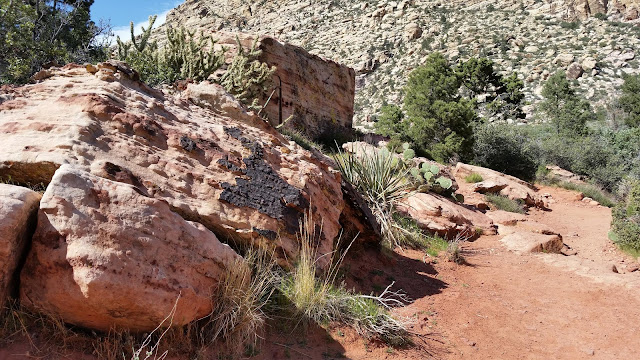 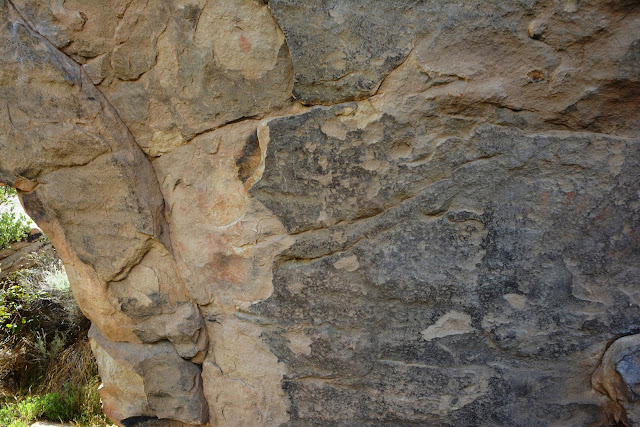 It's hard to see in this view, but in the enhanced version below you can see... 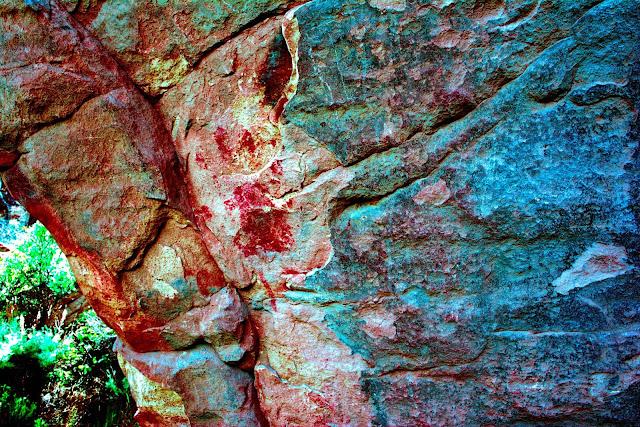 I have no idea how old these pictos are. Several hundred to maybe a thousand years? They were done by either the Southern Paiute, or the Patayan who were here before them.

We viewed another pictograph site and also one with both pictographs and petroglyphs. There are more in the area, but our time in the Las Vegas area was limited this trip. Next time.

I hope everybody is okay with my low-key and sometimes humorous approach to these places.