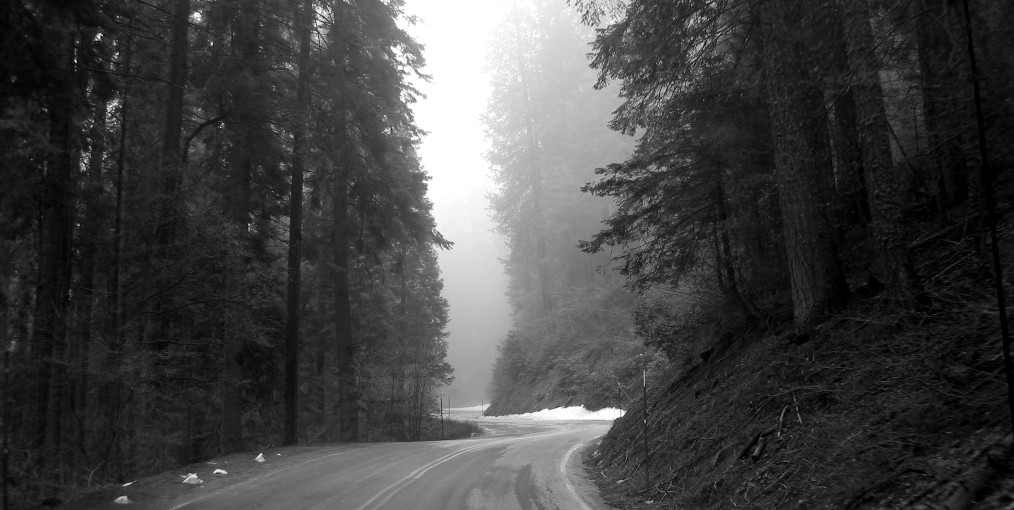 Road to Sequoia National Park, from Three Rivers (snow in May) 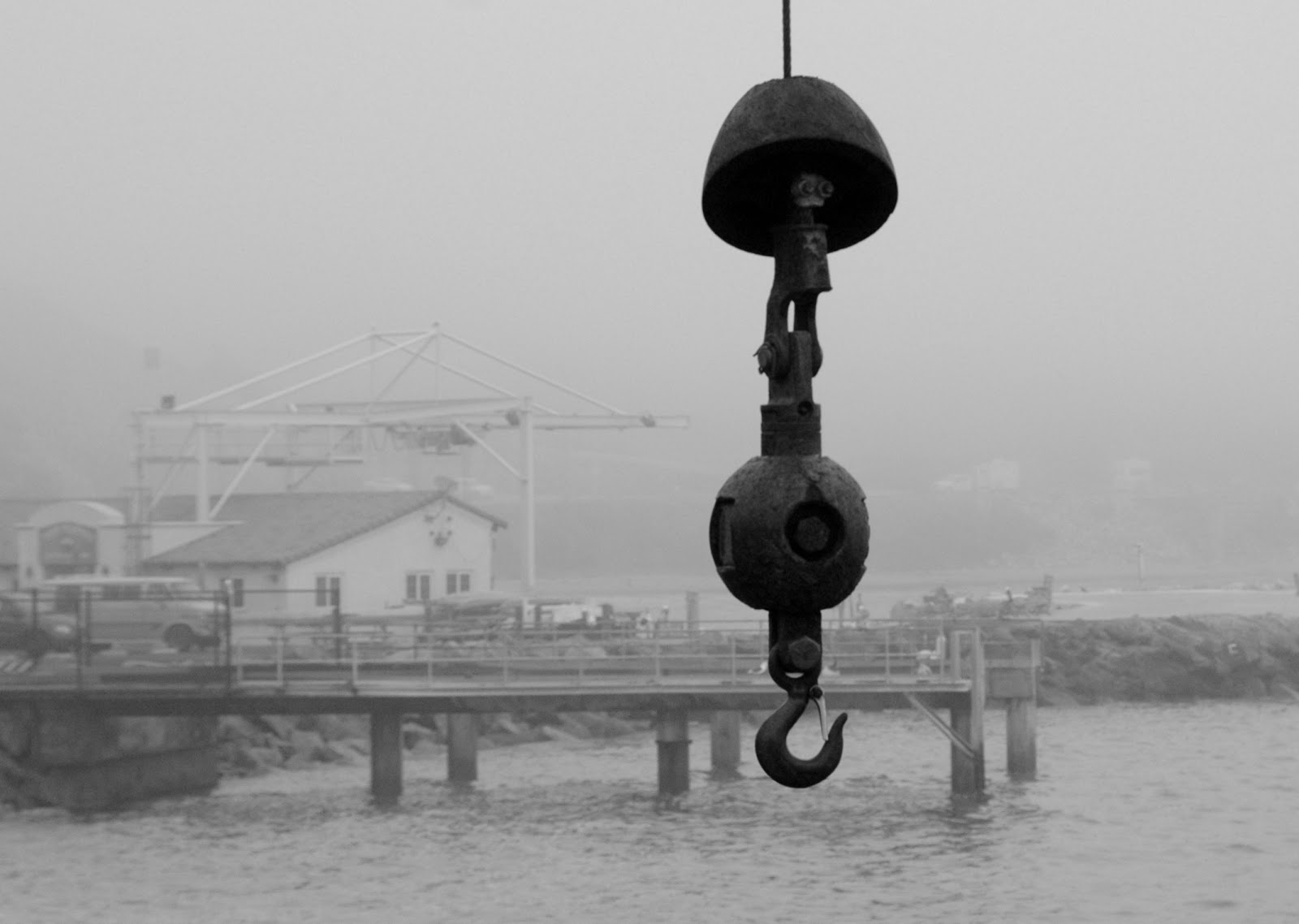 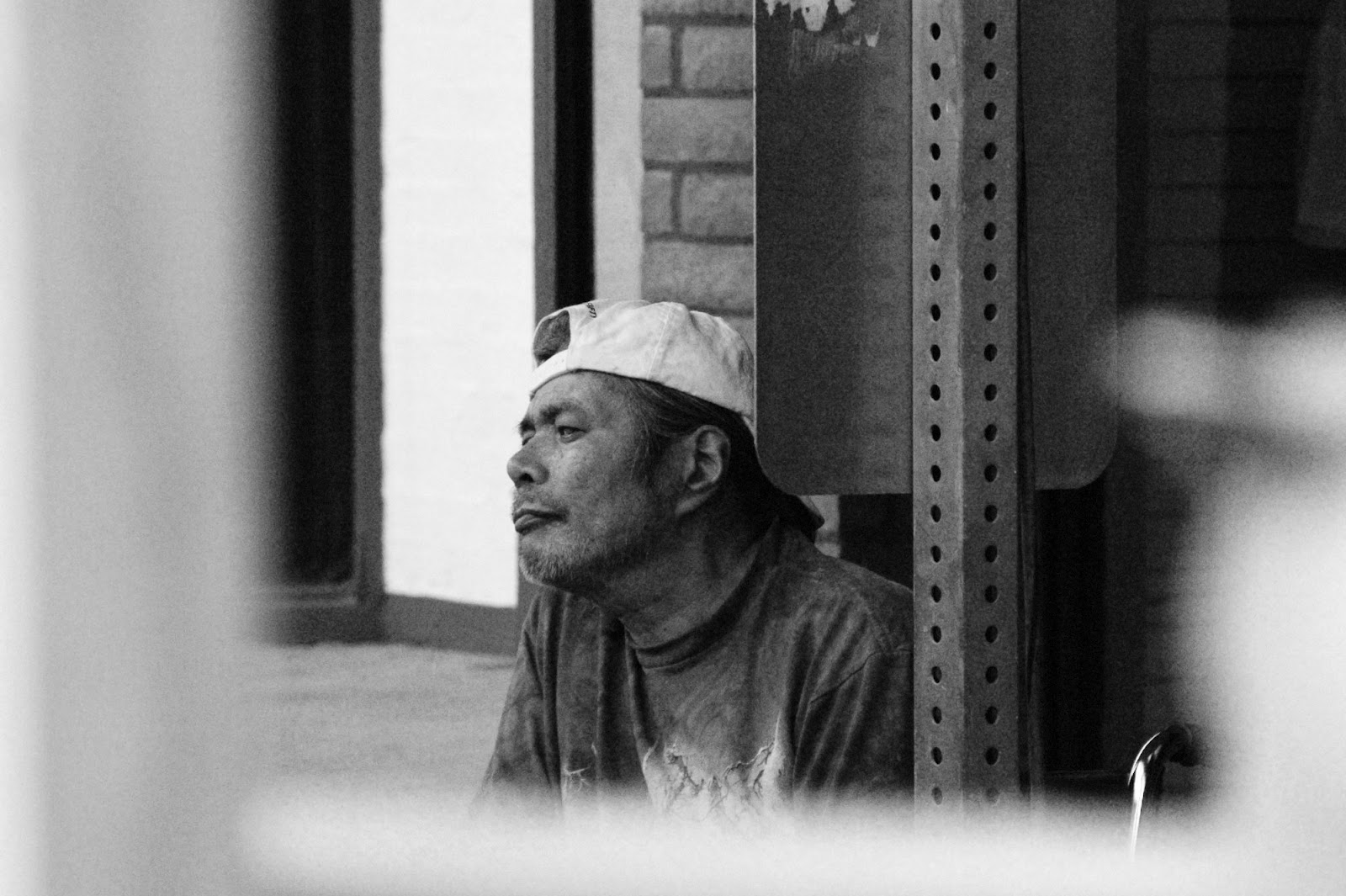 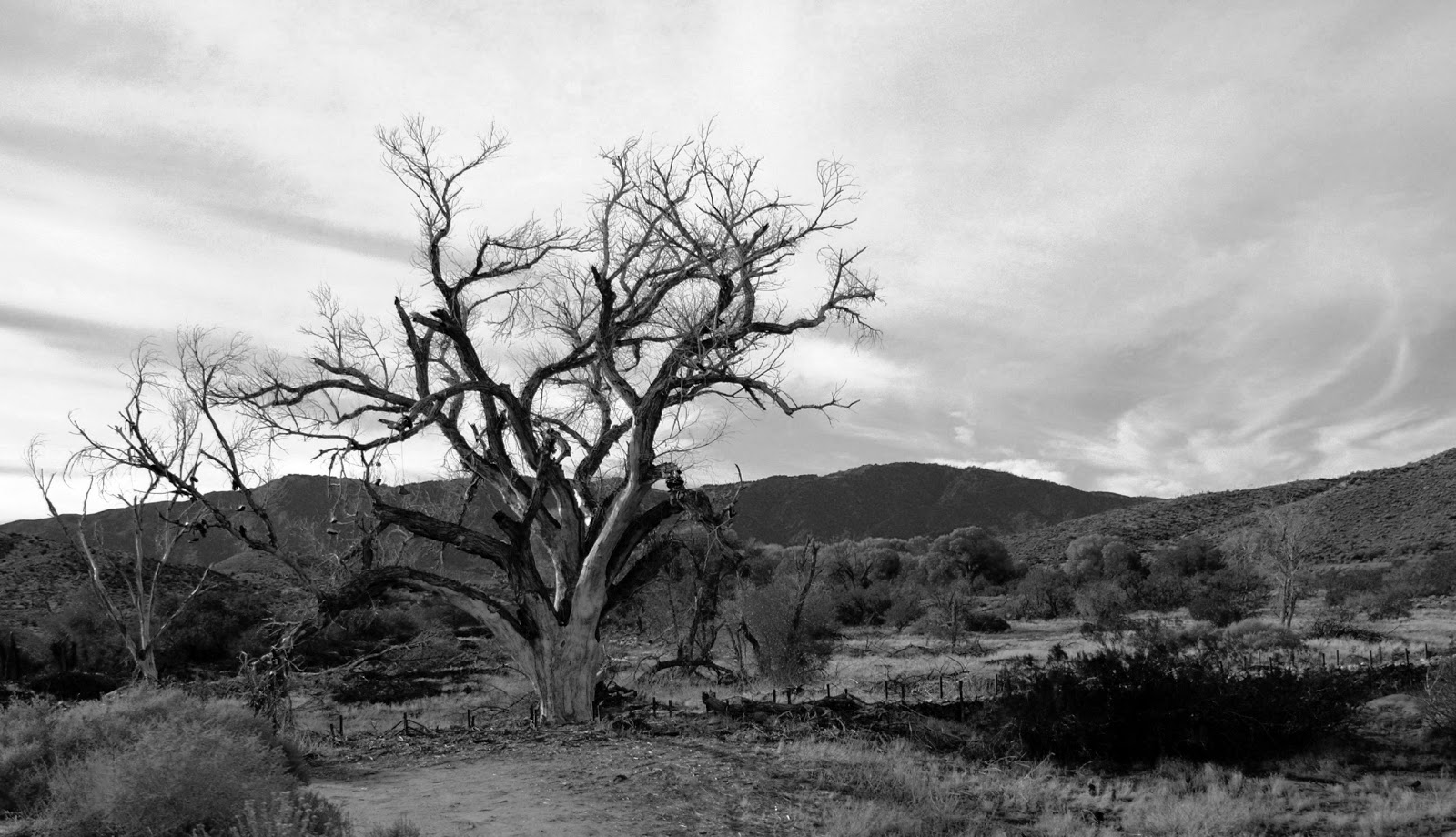 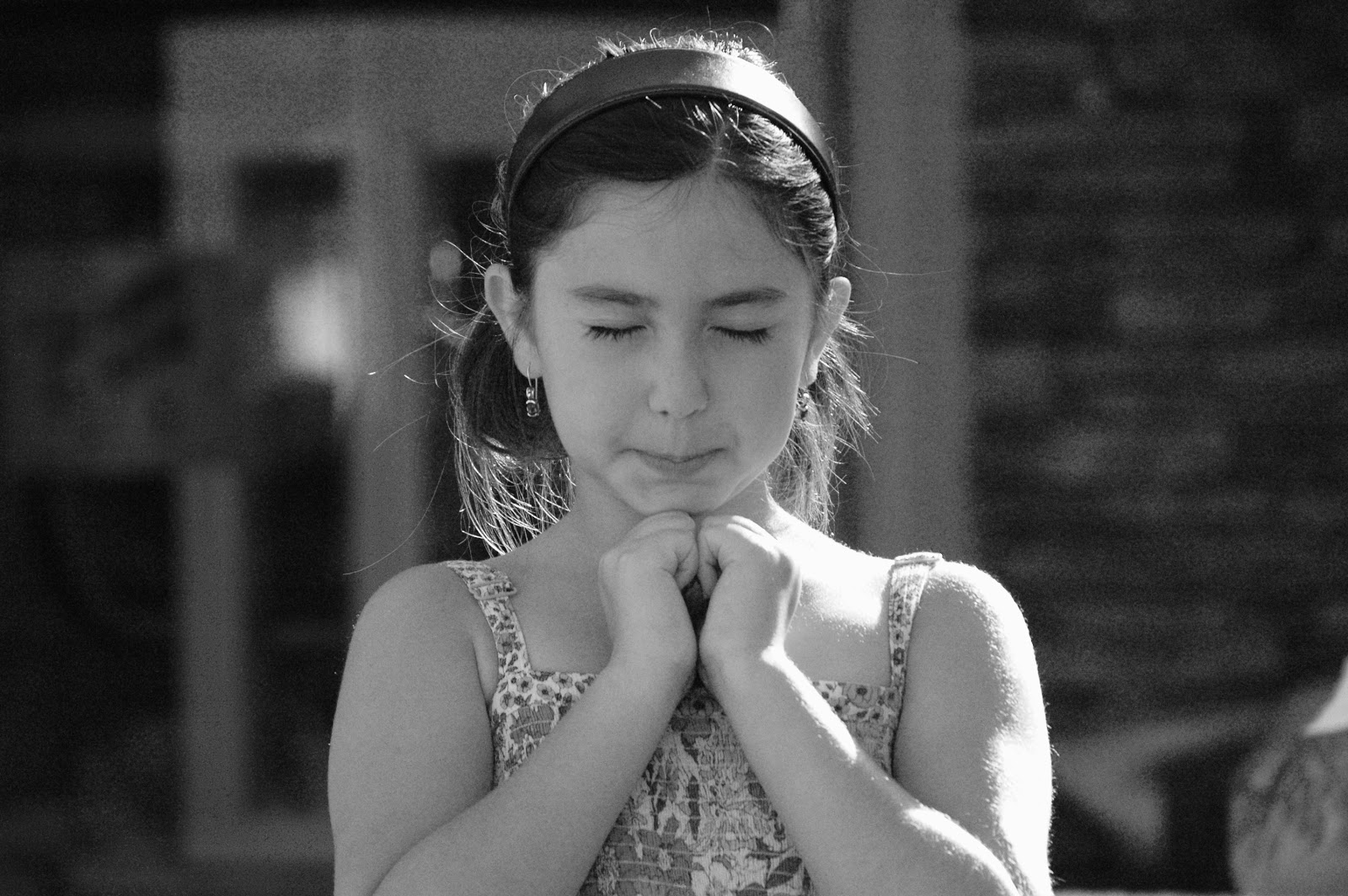 Make a wish, toss a coin


About two months ago, I posted an article about Ah-Ha-Kwe-Ah-Mac Village in the Cuyamaca Mountains. I had stumbled upon some odd looking bedrock mortars that inspired me to look for more in the same area. It turned out, that what I had actually stumbled upon, was a "pre-historic" Yuman Indian village site, that was later occupied by the Kumeyaay Indians for centuries. After doing a lot of research, it appeared that I had merely scratched the surface. Now, I'm hiking around trying to find things that are being kept on the down-low, by two state parks and a national recreation area (for good reason). The subject of this post is the ancient village of Hual-Cu-Cuish.

I've found more sites (many more to discover) and will show them to you, but I won't tell you where they are. As always, the few landscape shots I include, may, or may not be in the exact same area as the village. Do not go searching based on them. We're talking about the desert and two mountain ranges. Both can be very unforgiving. Umkay?
-------------------------------------
In addition to the research, I've got a pretty good sense of where Indians made their villages and seasonal camps. However, I don't want you to think that I just walk right up to them. I only do posts on the successful searches. Believe me, I've spent many hours hiking and climbing and have found nothing. I have to admit that I also enjoy searching. 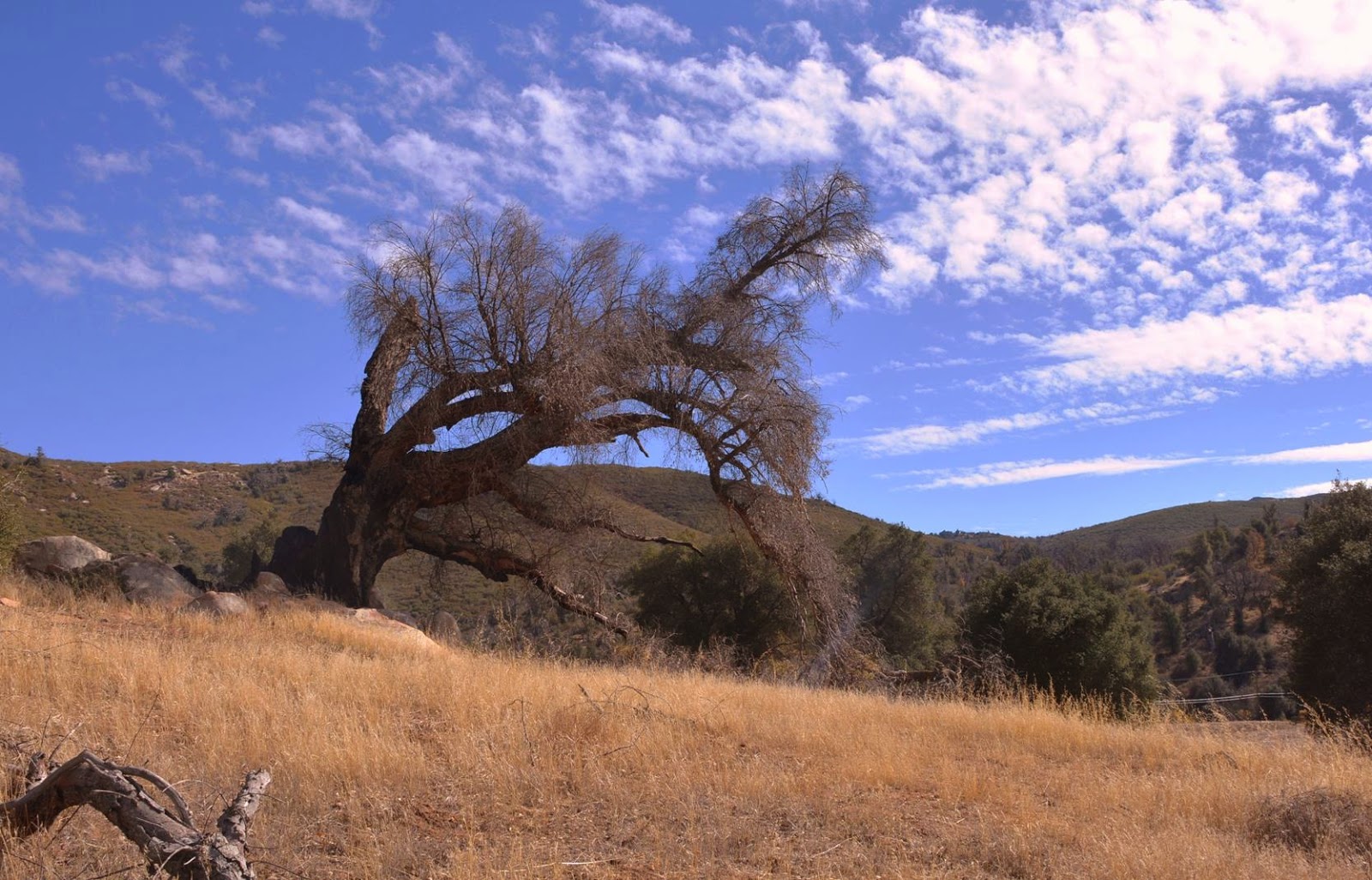 Great scenery (that is in the area, but may or may not be on the site) 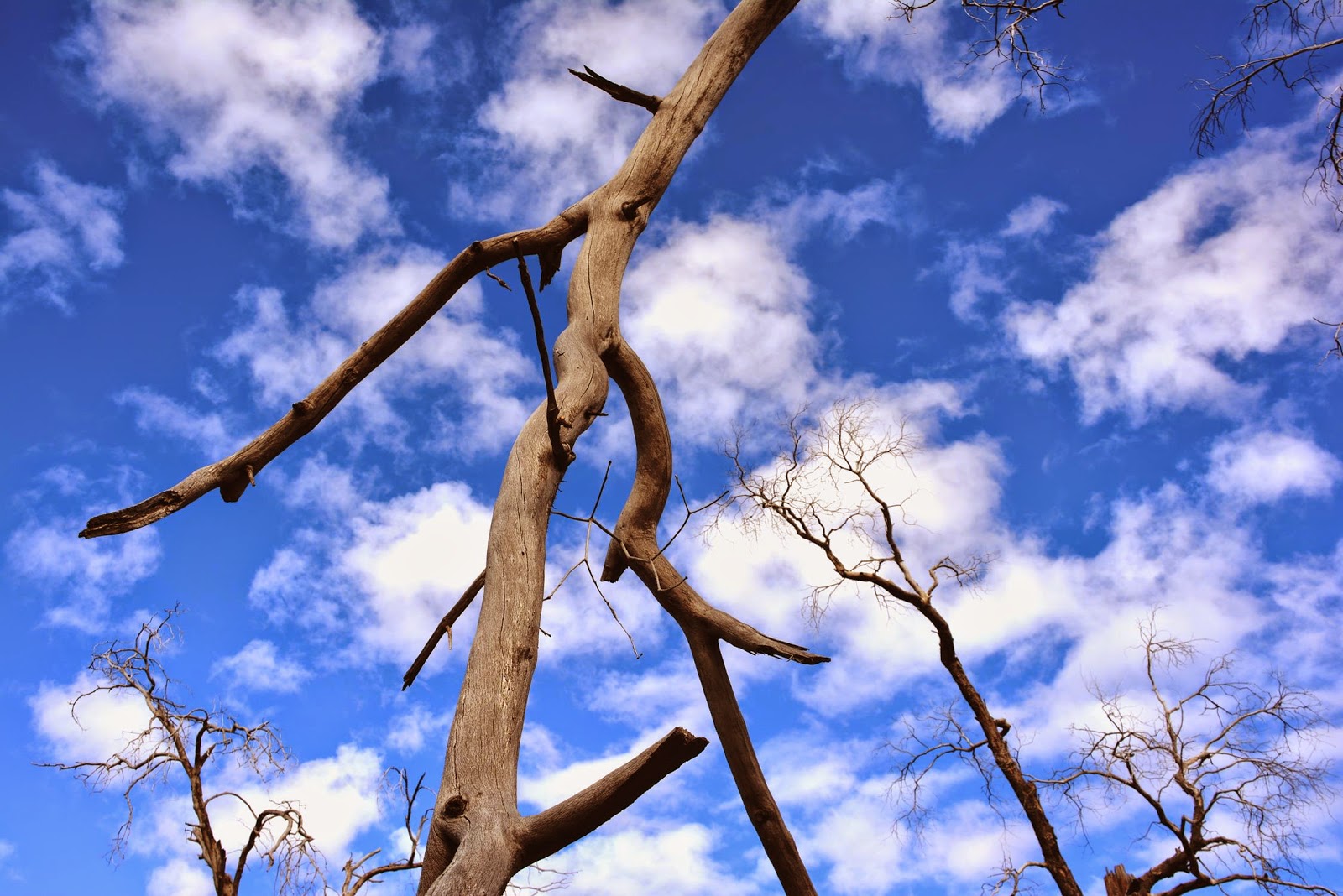 This was taken on the site, but you can't expect me to look down all the time, right? 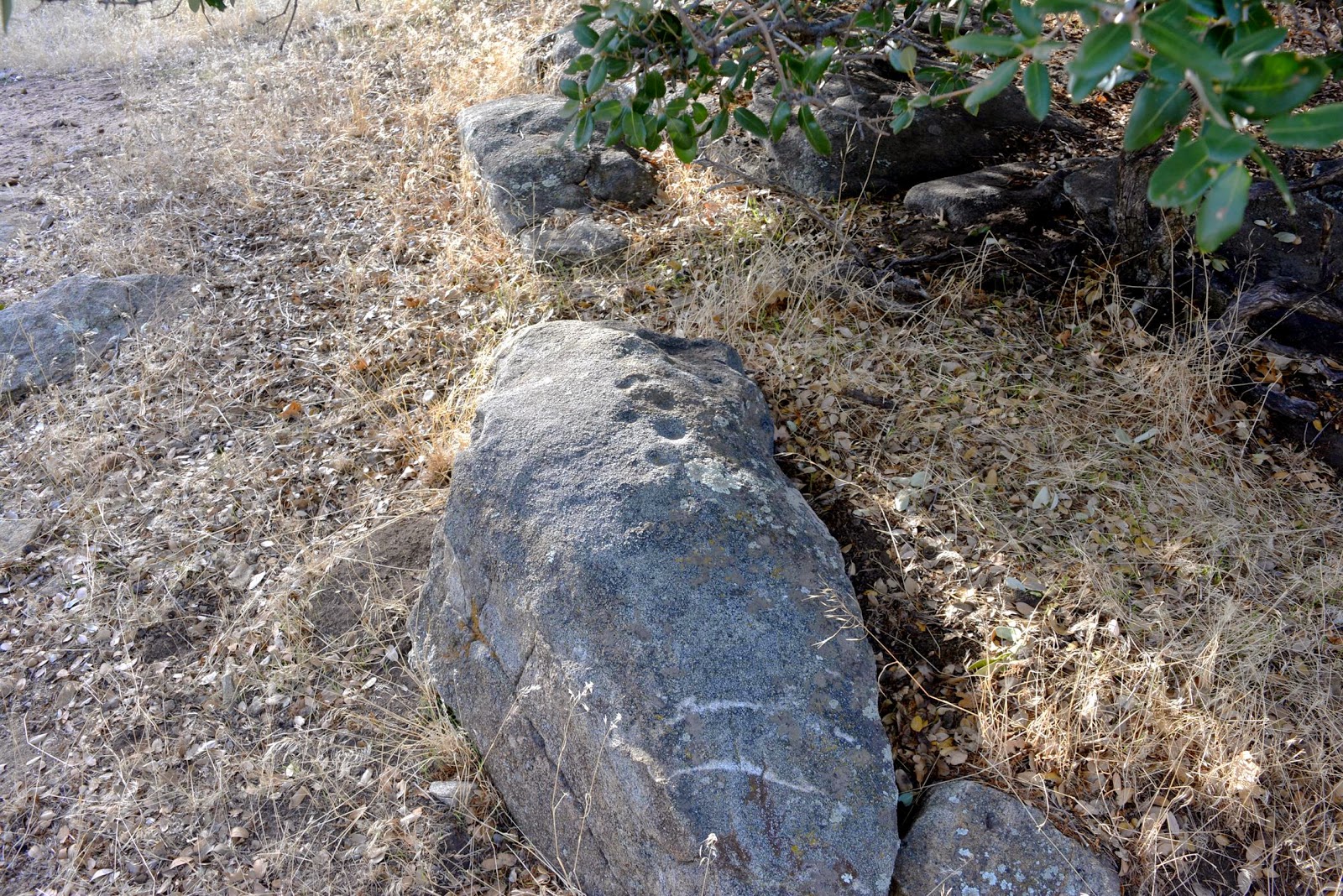 This was the first big chunk of rock we saw, at the potential village site. I could not have been happier. It had several cupules ground into the top of it. For those that don't remember, "cupules" are thought to be one of the oldest forms of rock art. 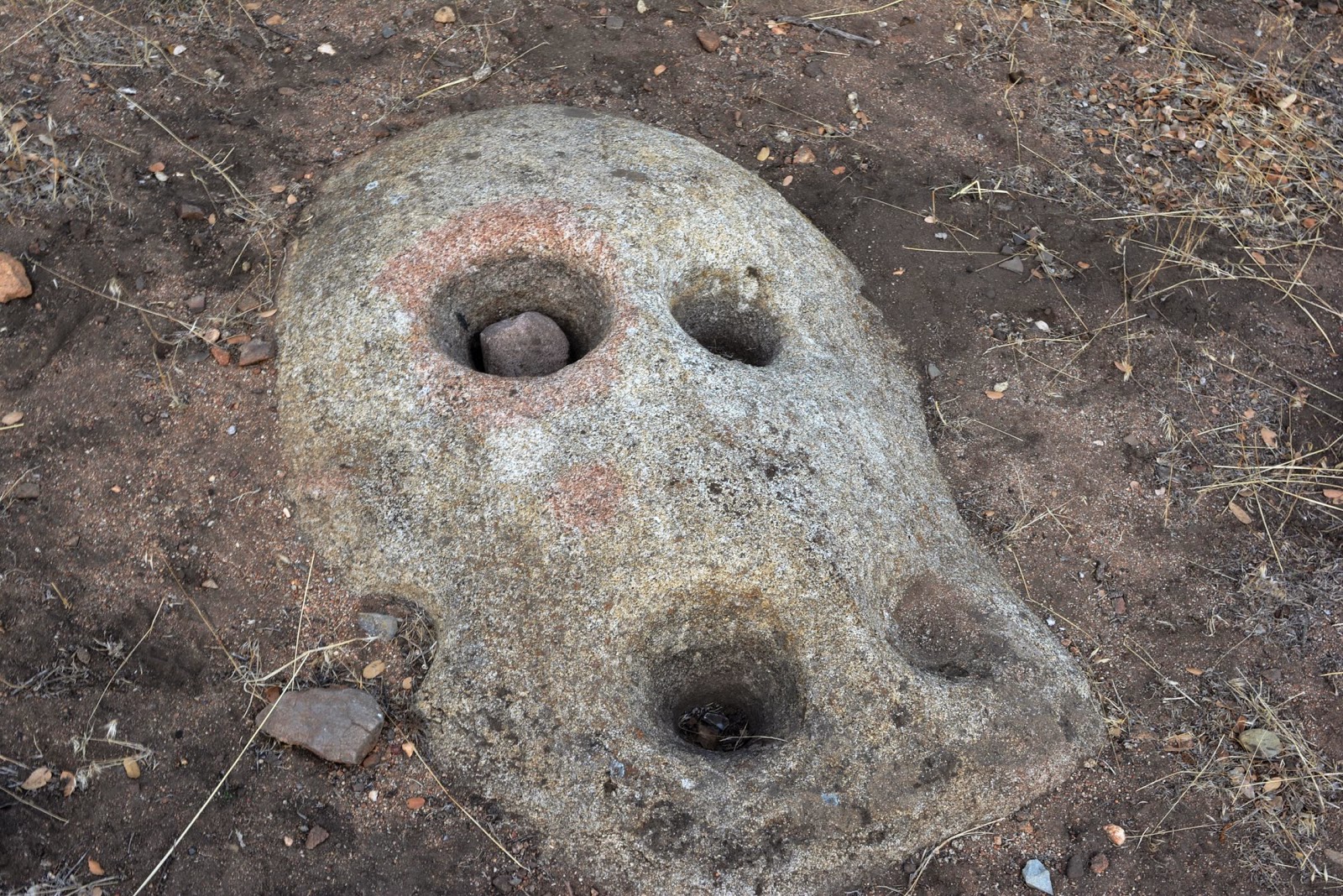 It wasn't but a few more steps to a chunk of bedrock that had three "morteros" (mortars) and one "not sure," it could be a failed mortar or even a cupule. The most exciting thing about this spot, was the presence of a broken "mano" (pestle) in one of the mortars. I'm not so delusional as to think that the mano has been there for centuries, but it was still exciting to see it in there. There was another sitting on the ground (I'm looking for the photo). To find things like this, is proof that very few people have been here. If they had been, they might have become somebodies souvenirs. If you enlarge the photos, you can see that there are pottery shards and some stone flakes (from making tools and/or points) on the ground. 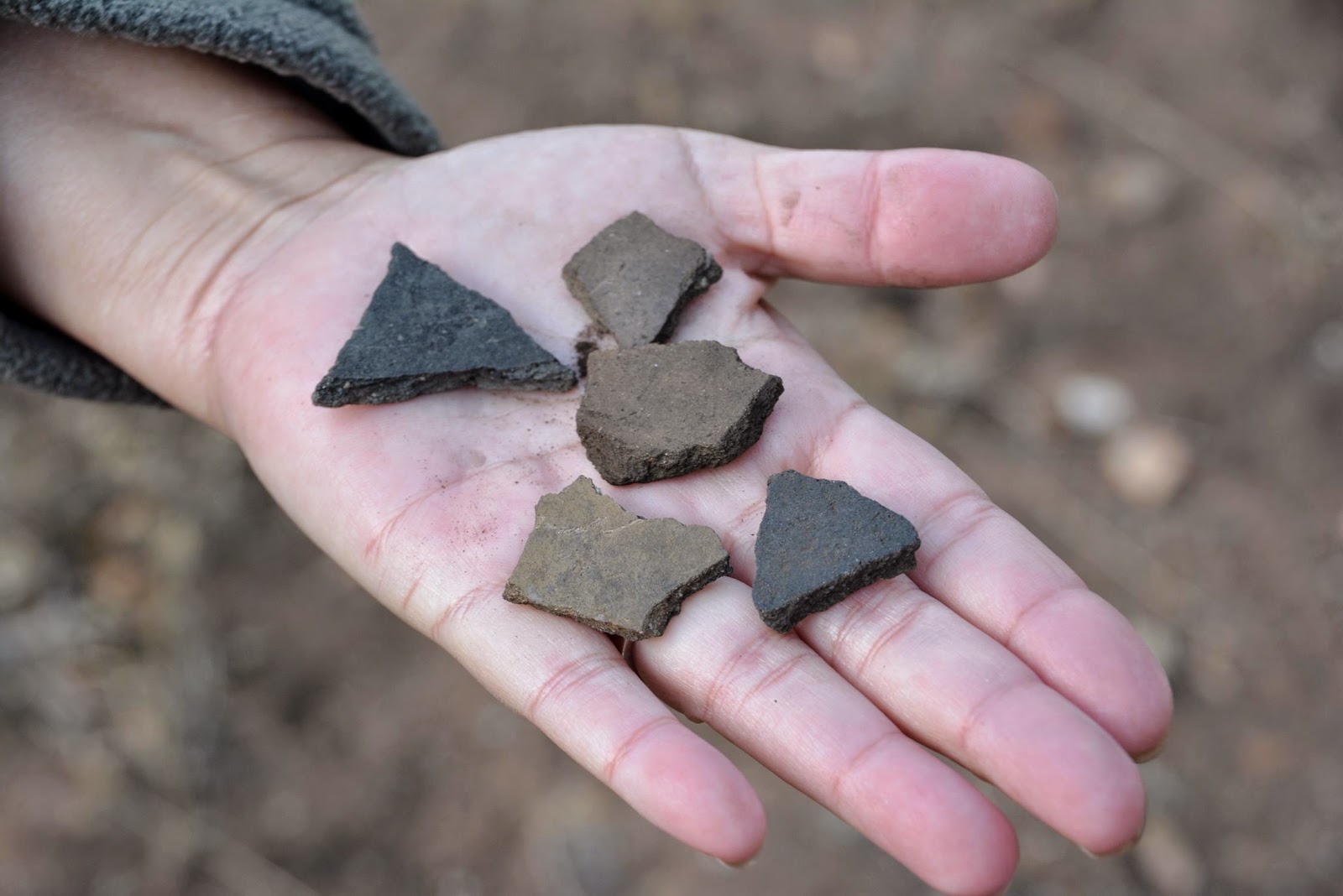 A handful of pottery shards. There were many more sitting on the ground. The clay in this area seems to be light, so the lighter shards are probably from pottery made in this area. The darker pieces are probably from pottery made in the desert, while the tribe was there during the cold months. If I'm wrong, or if I'm correct, I'll update with the clay names, or by deleting this part altogether. 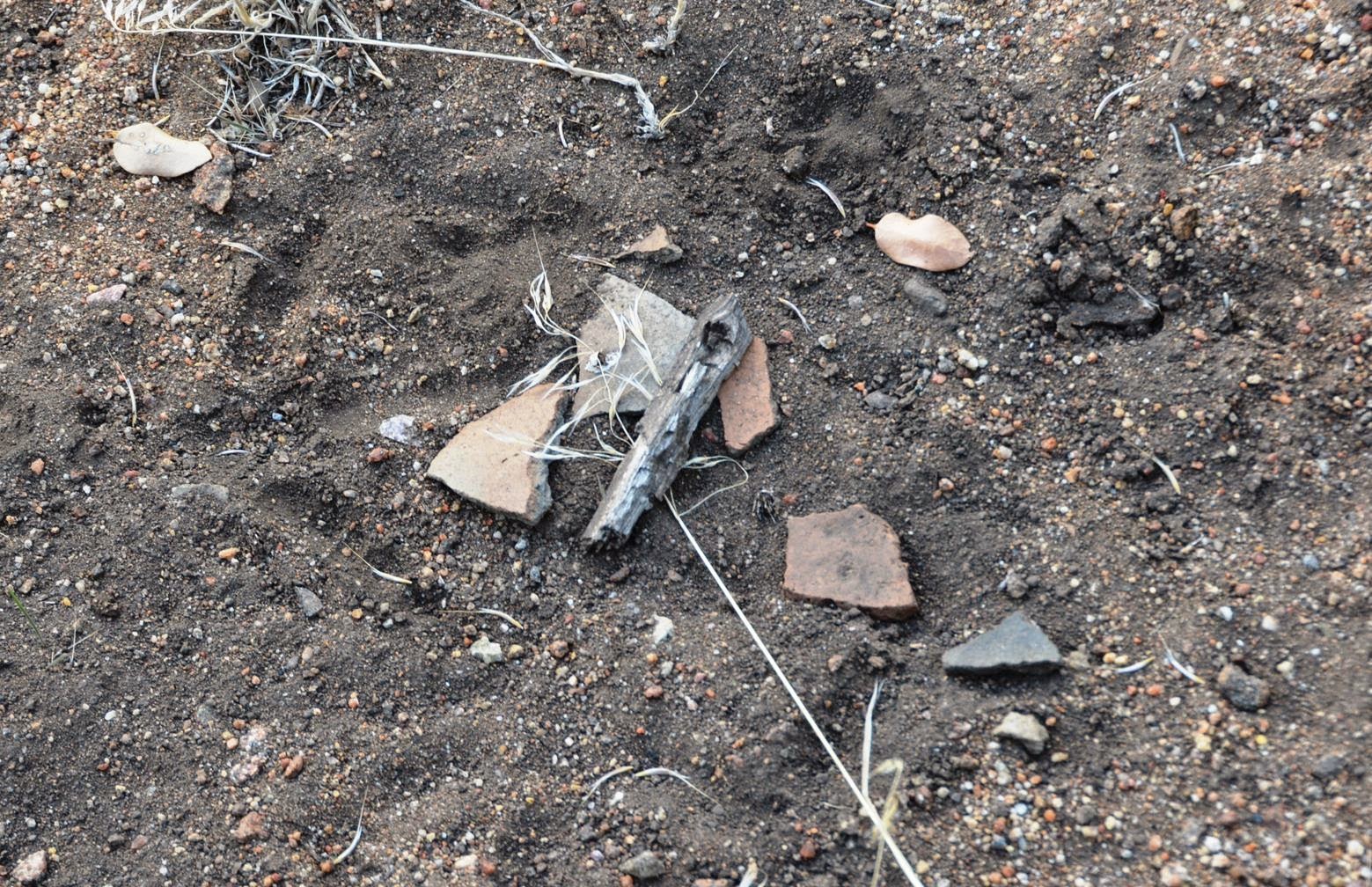 More shards on the ground. We also saw a few small pieces of obsidian. 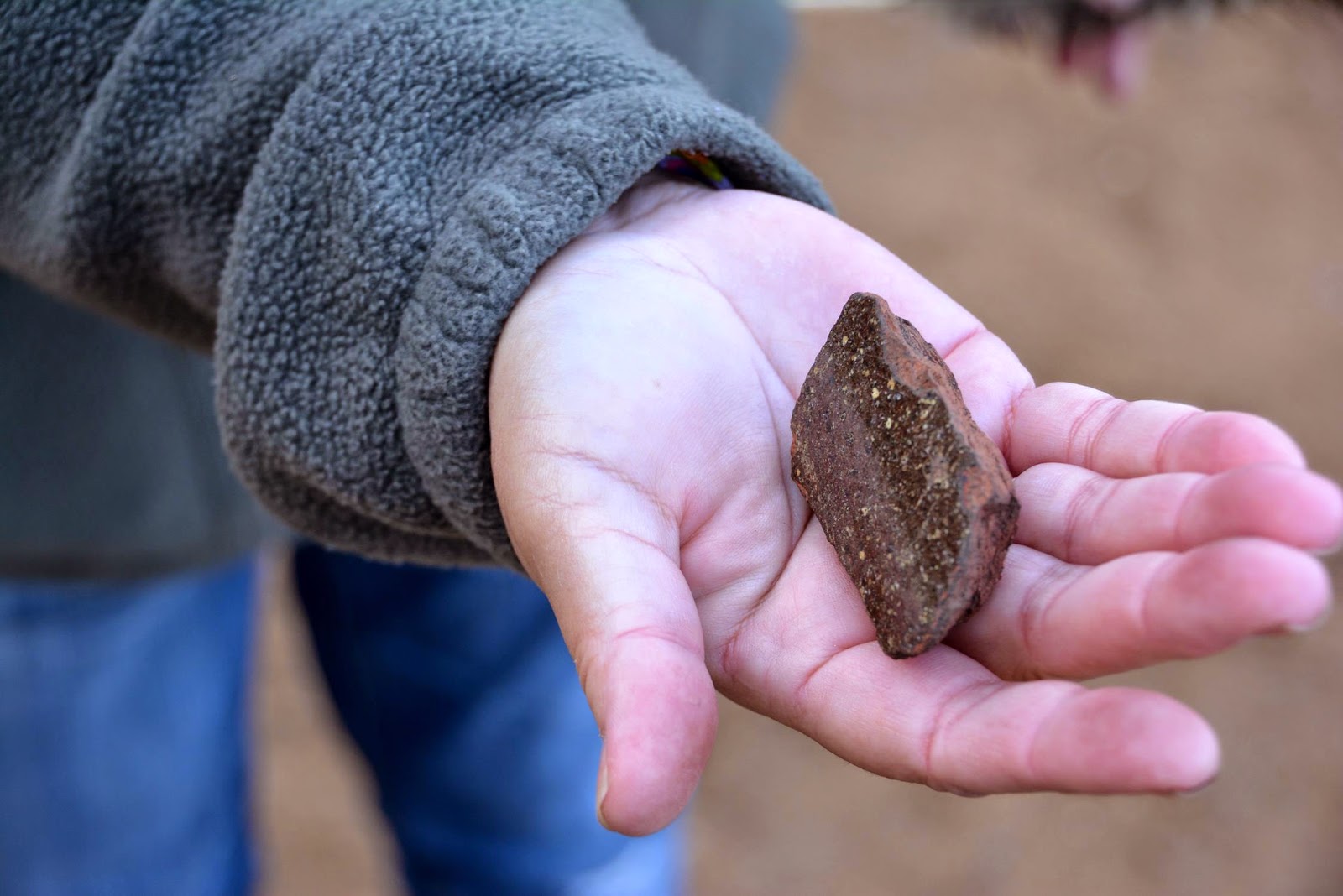 This was the most puzzling find of the day. This is a piece of pottery that appears to have been glazed both inside and out. I was under the impression that none of the Indians in this part of the state had glazed pottery. Maybe it's a chunk of glazed brick. Something else to investigate. In case you were wondering, we may pick some items up to look at, but then they get placed right back on the ground. 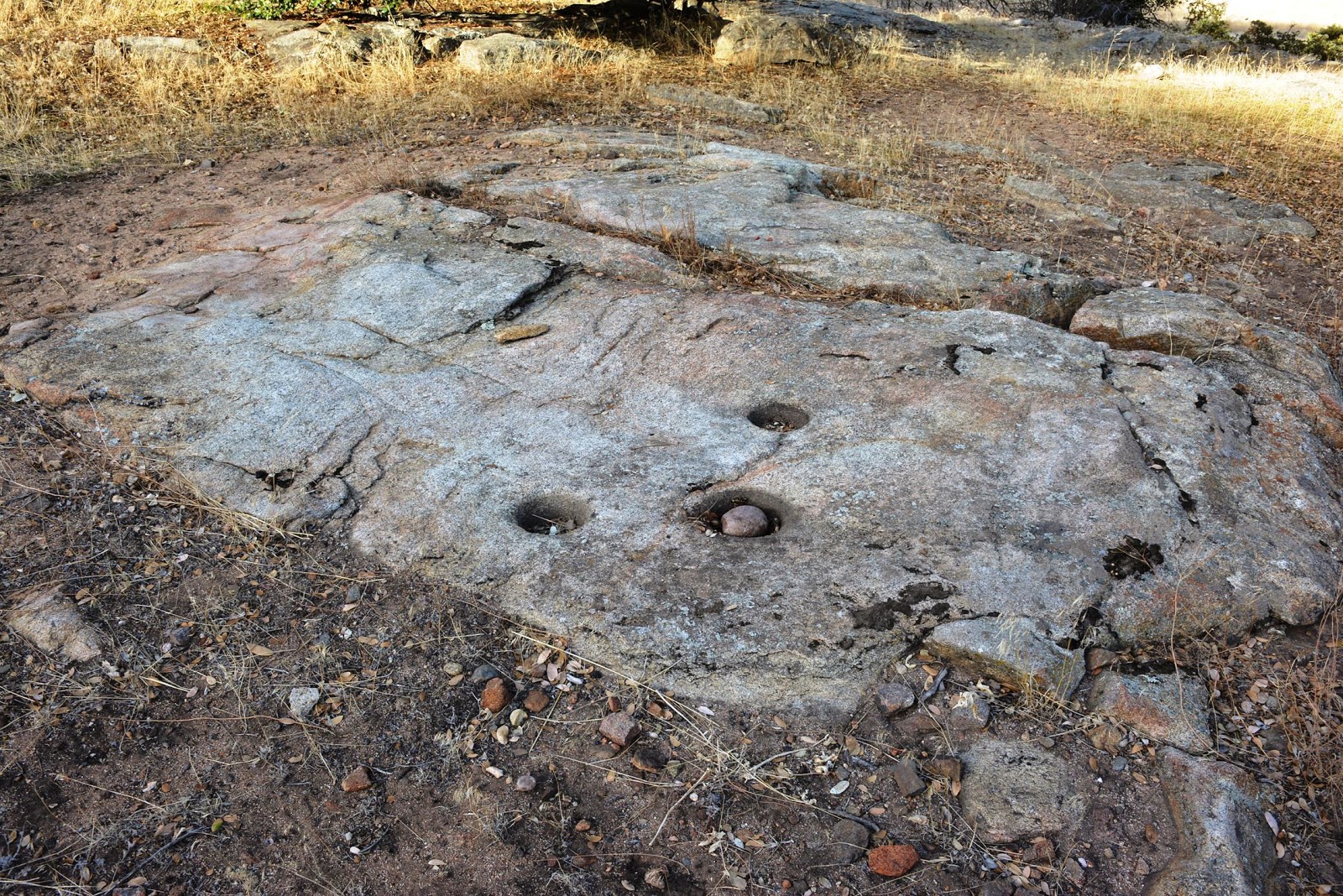 Another chunk of bedrock with mortars ground into it. It is pretty clear that this rock and almost all other rock in the area has been damaged by the many wildfires that occur here. Notice the mano (pestle) in one of the mortars. Another surprise for us! 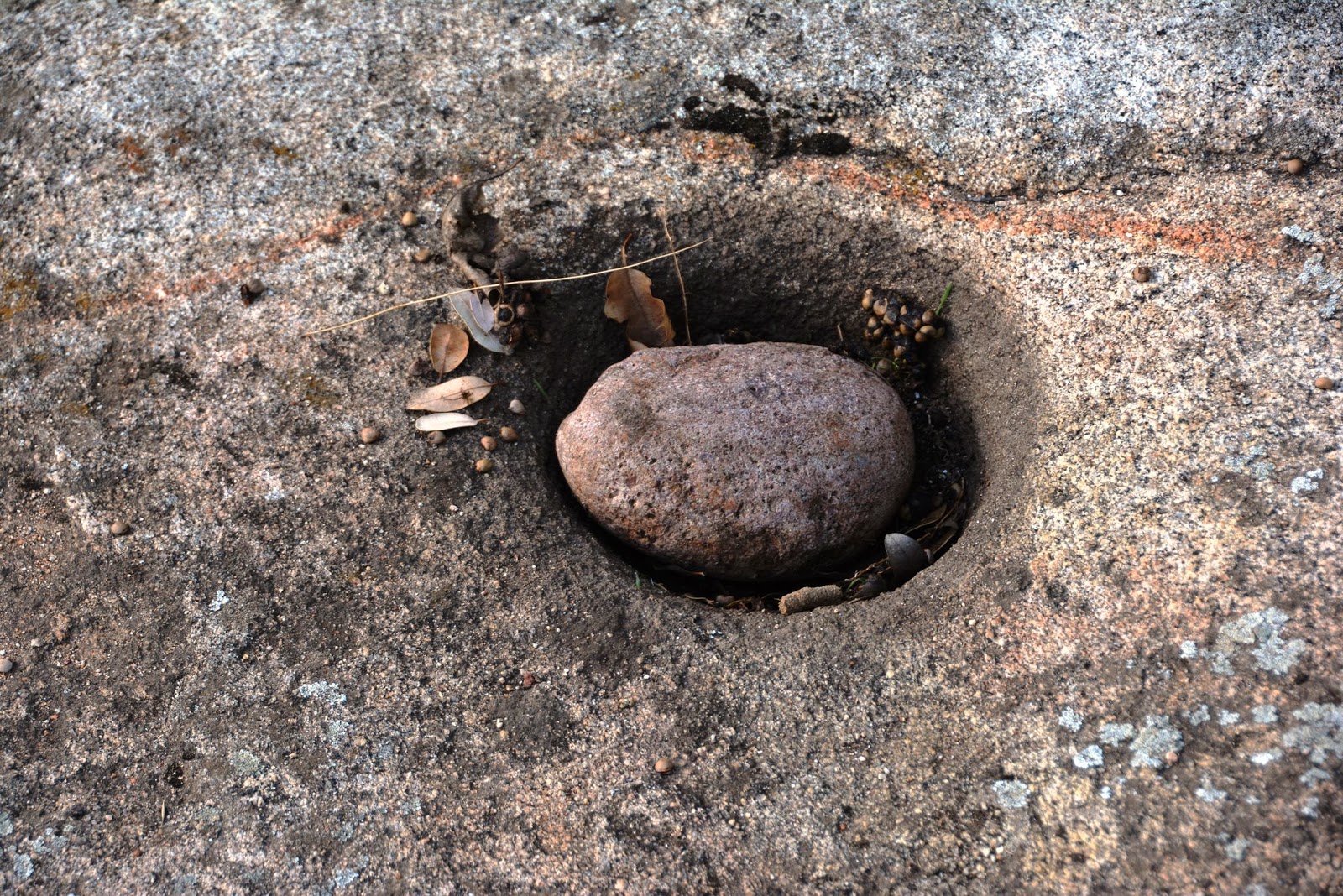 A close up of grinding surface and the grinding tool. 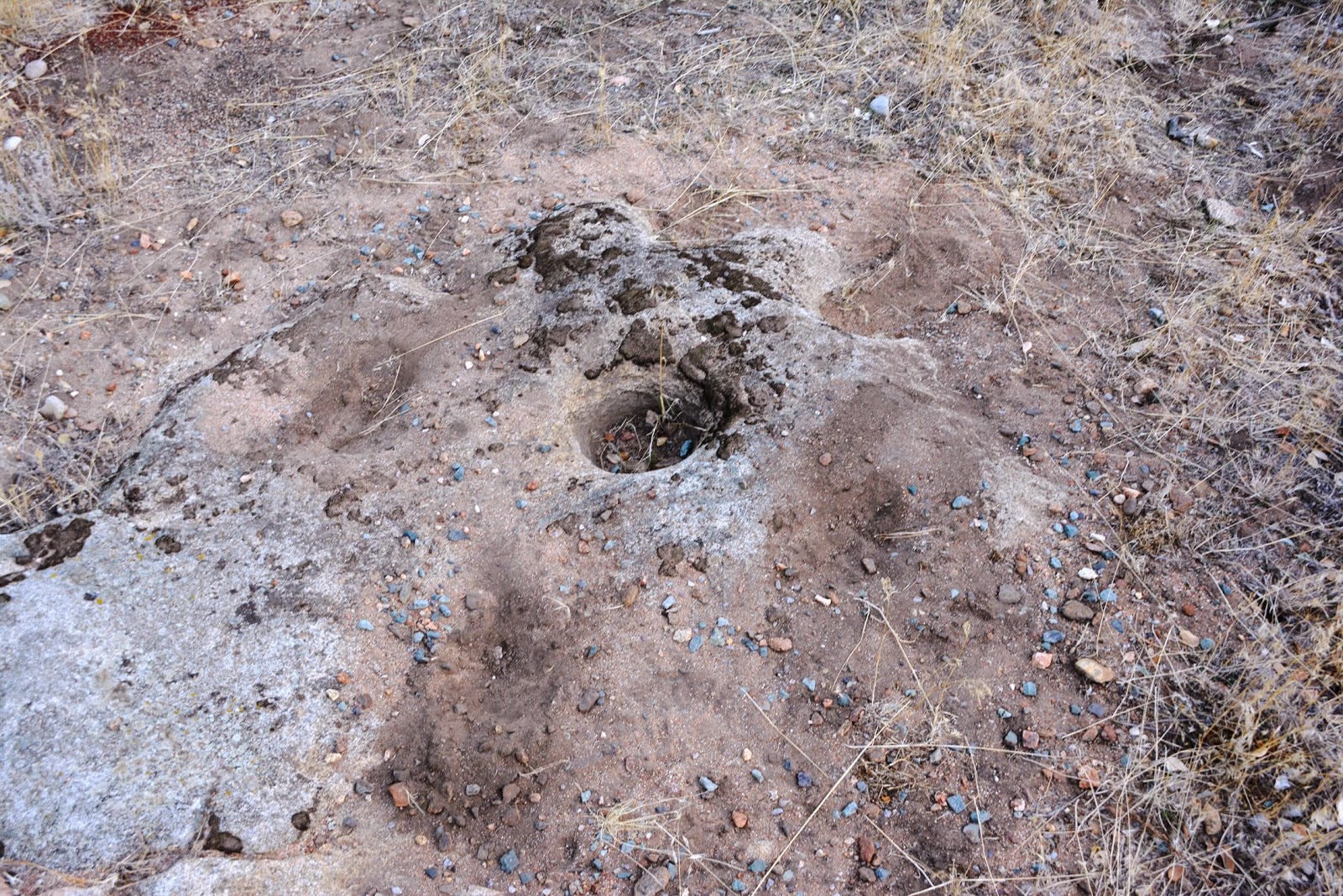 I think the little blue flakes are soapstone. There is some in the area and it could have made it's way here. They used it make things like arrow straighteners, pipes, etc. Soapstone carvings have also been found in the area. They probably traded soapstone to other tribes. Maybe for obsidian. 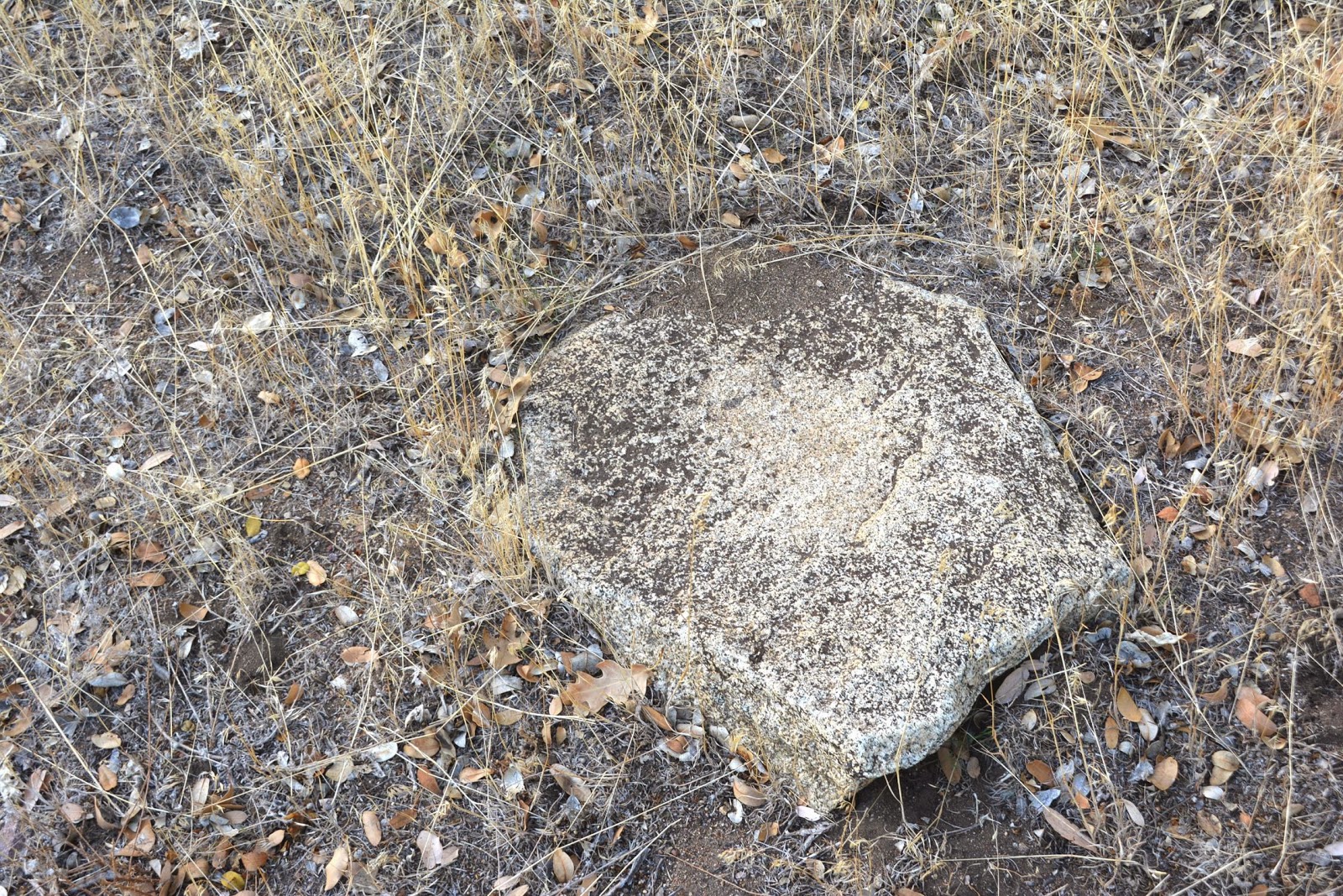 A grinding surface called a "slick." There were a few of these here. 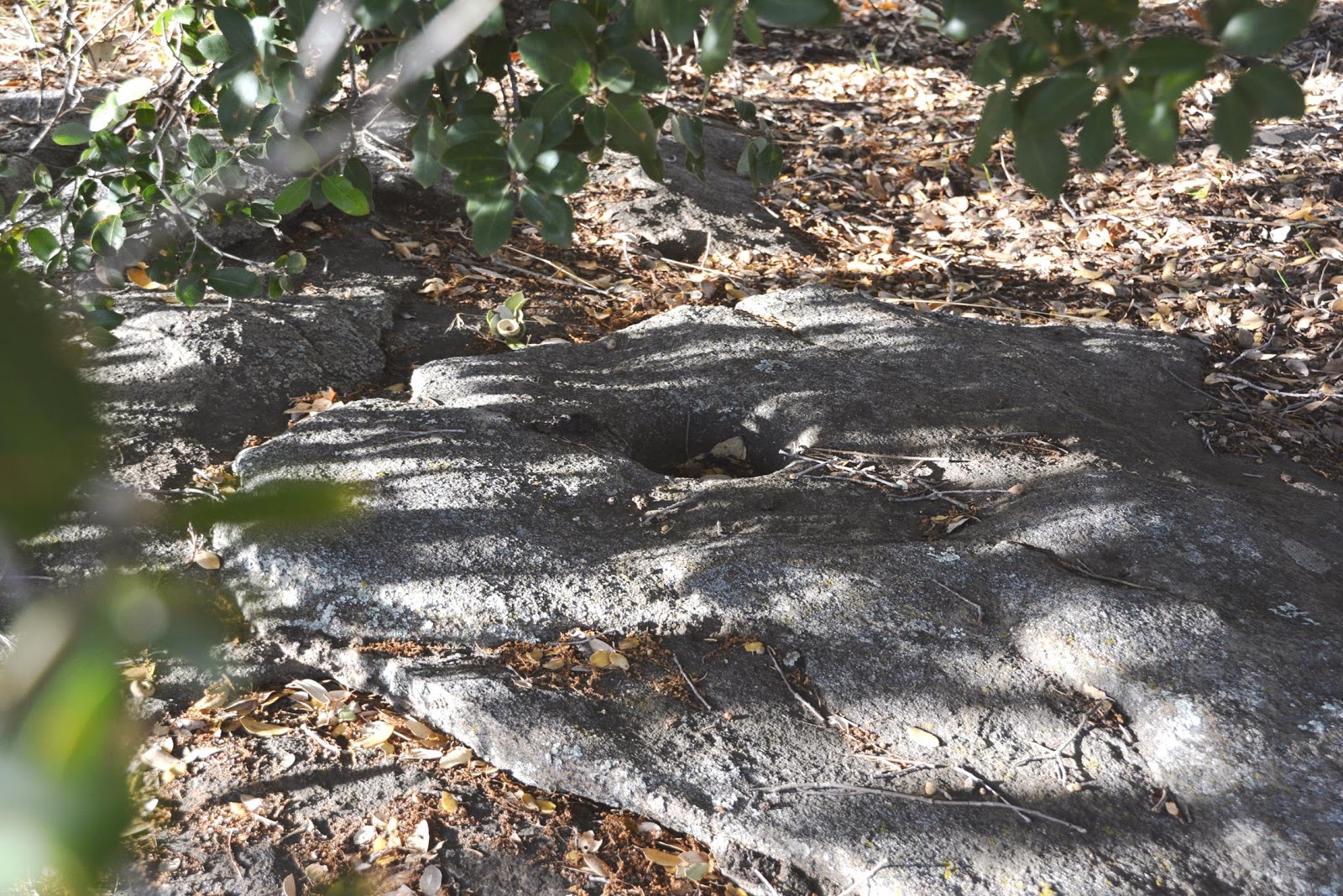 This mortar was one of several that were hidden in the bushes. I'm sure that many more are buried in the dirt and covered by a thick blanket of leaves and muck. 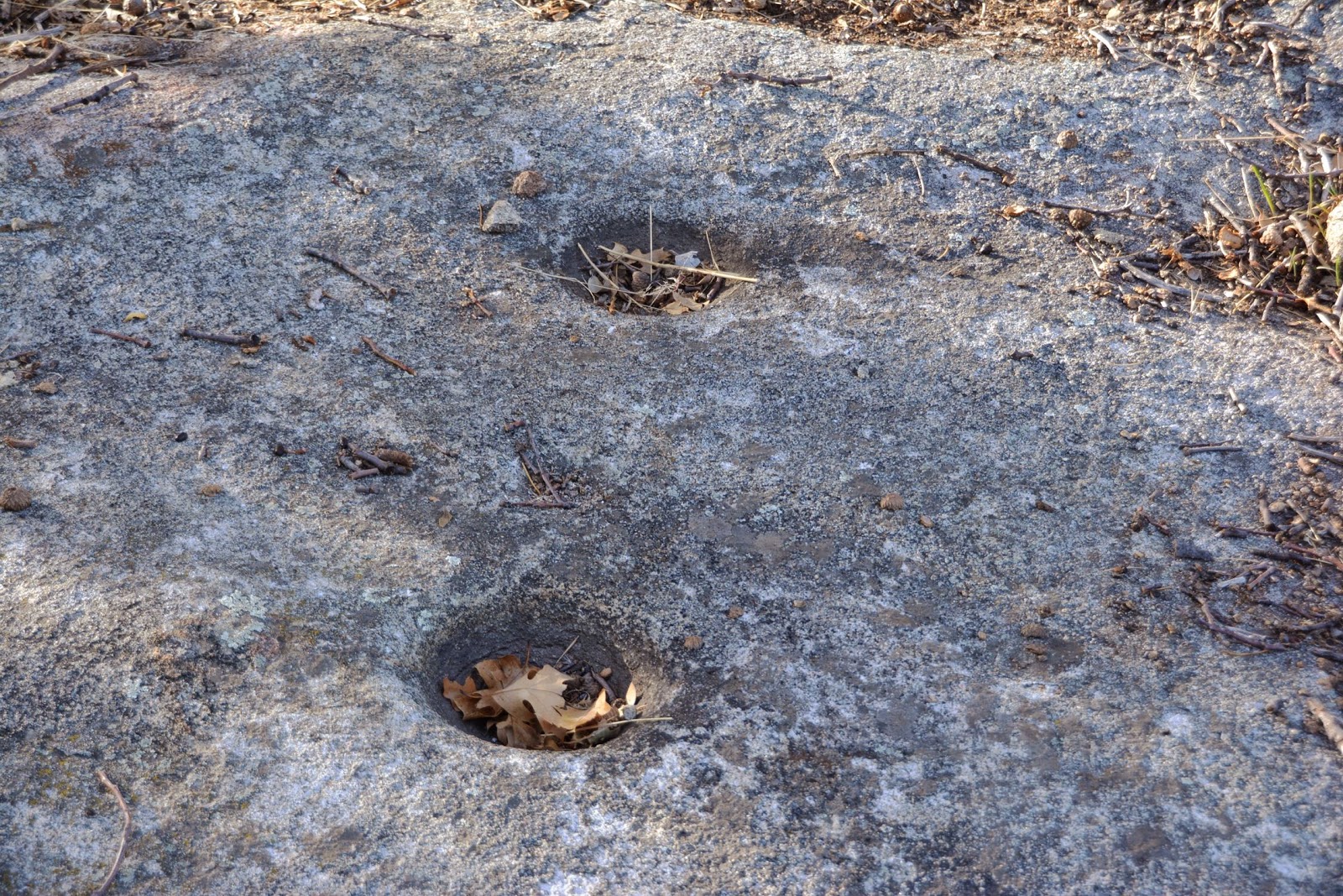 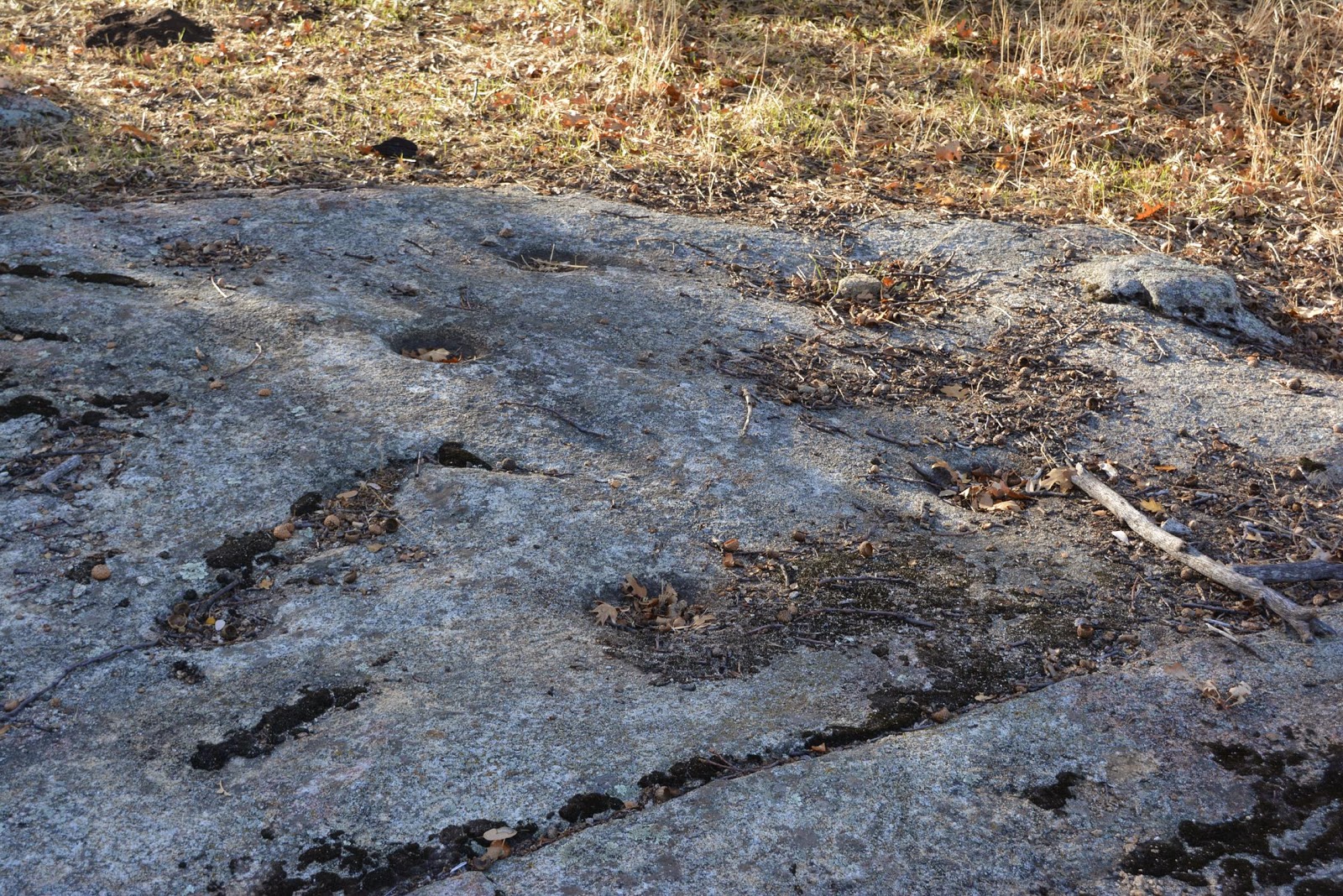 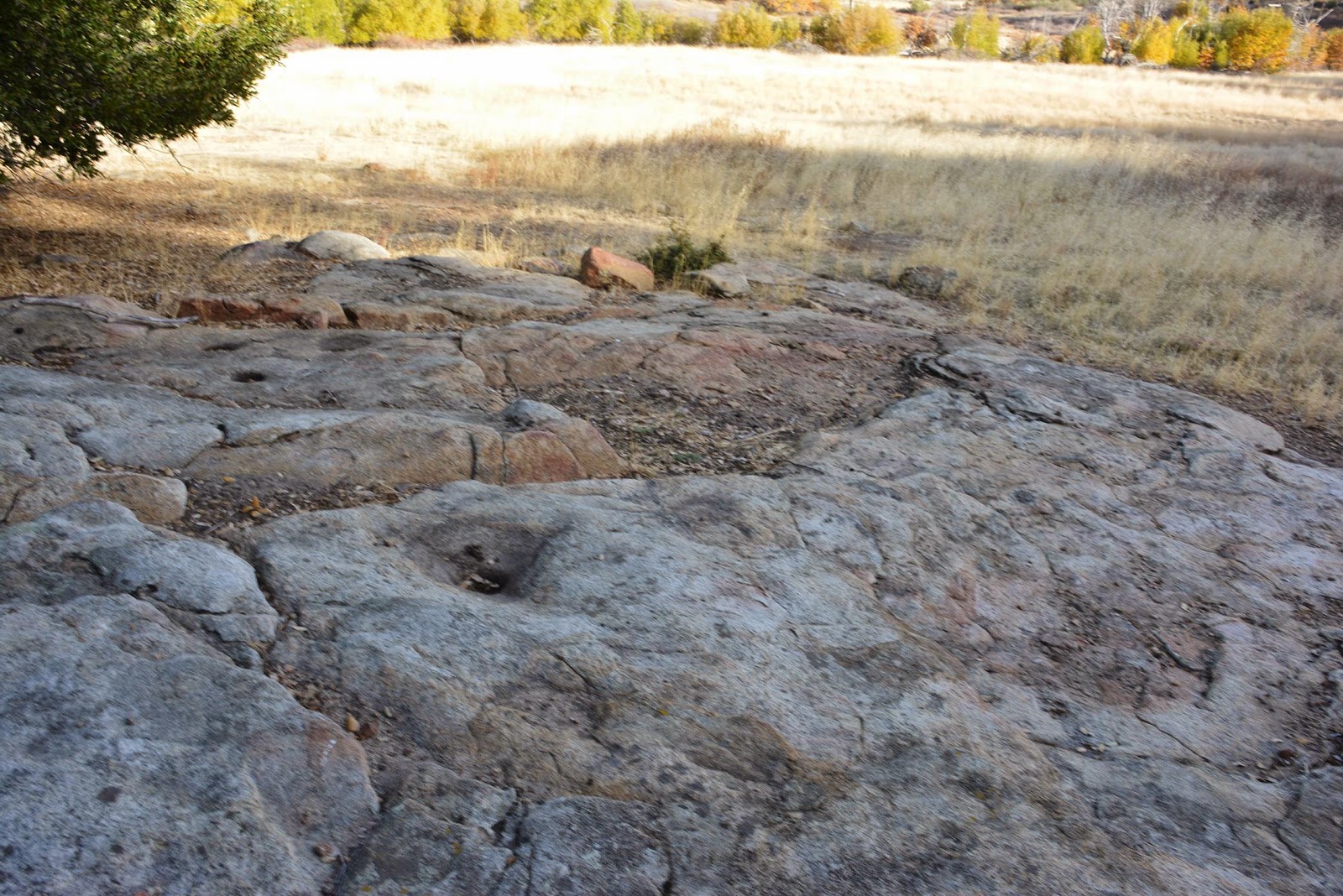 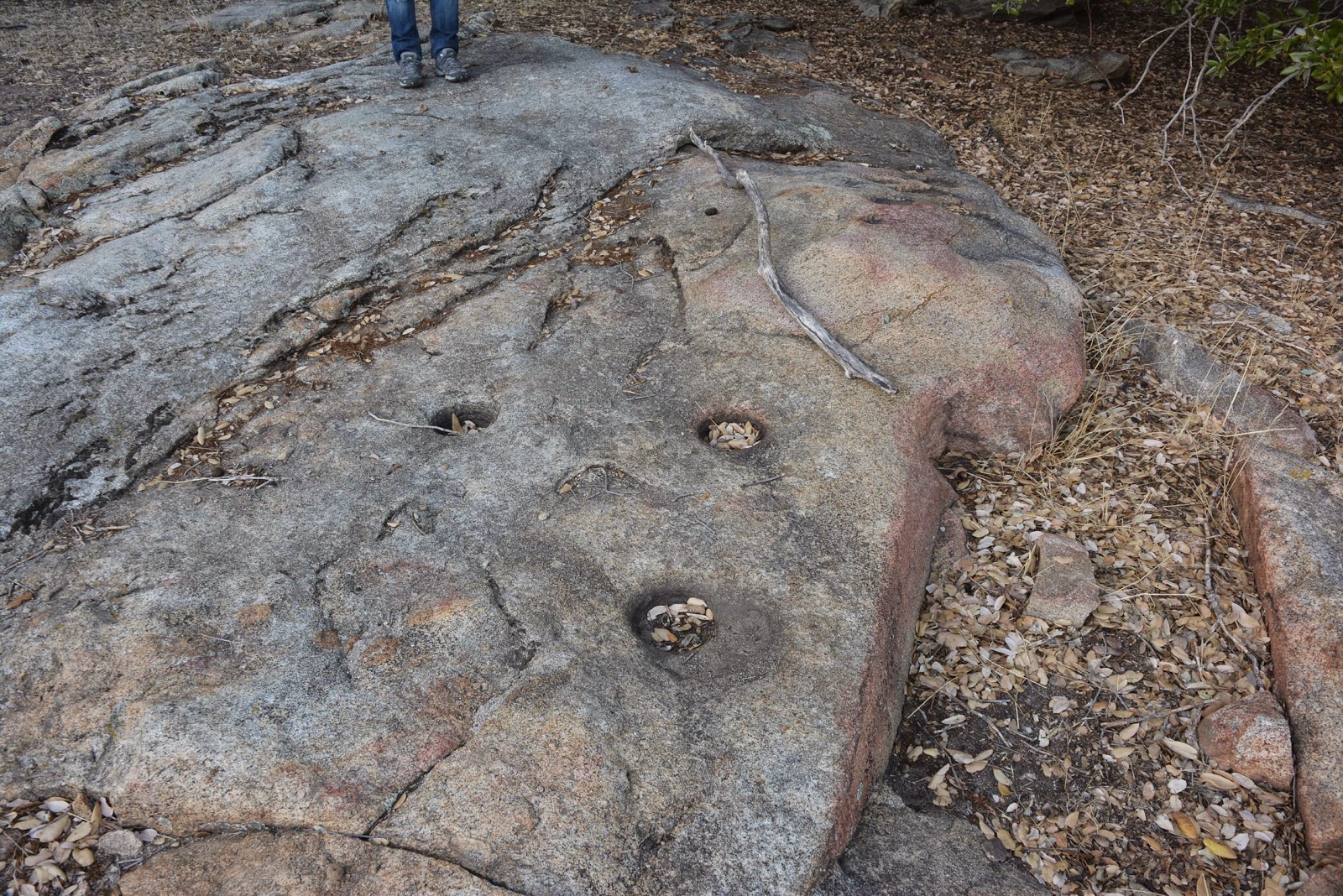 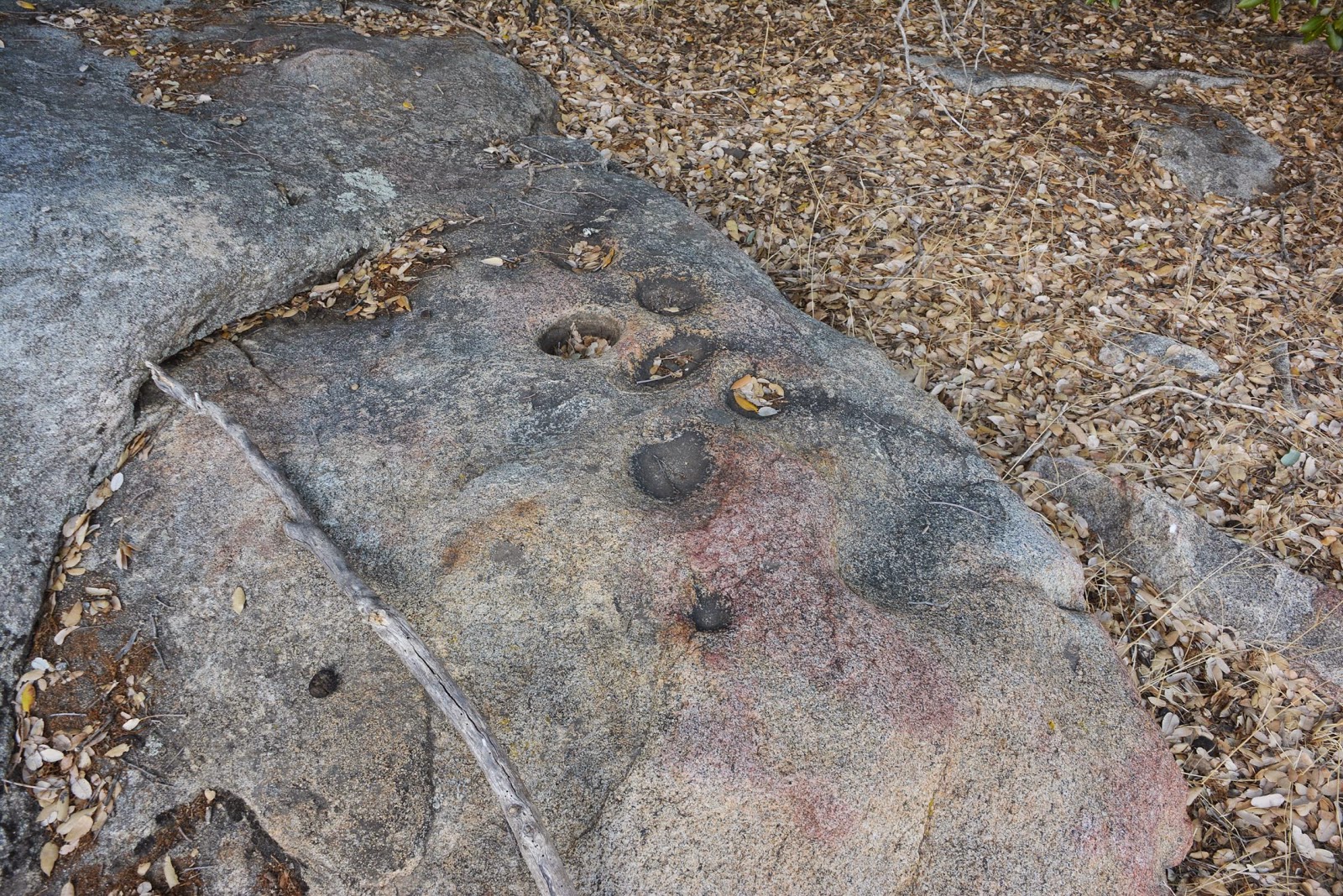 A combo rock with mortars, Cuyamaca oval mortars and cupules 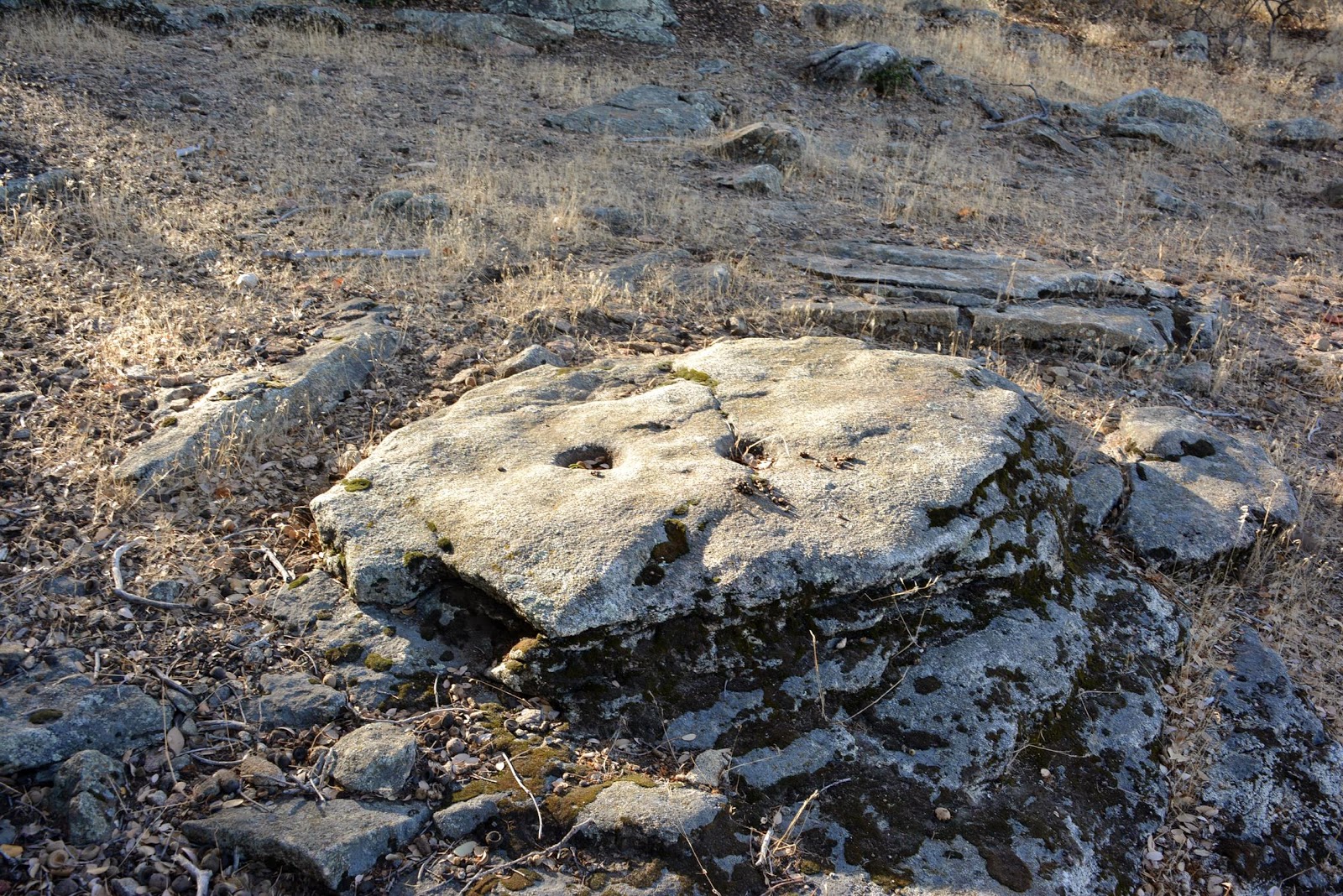 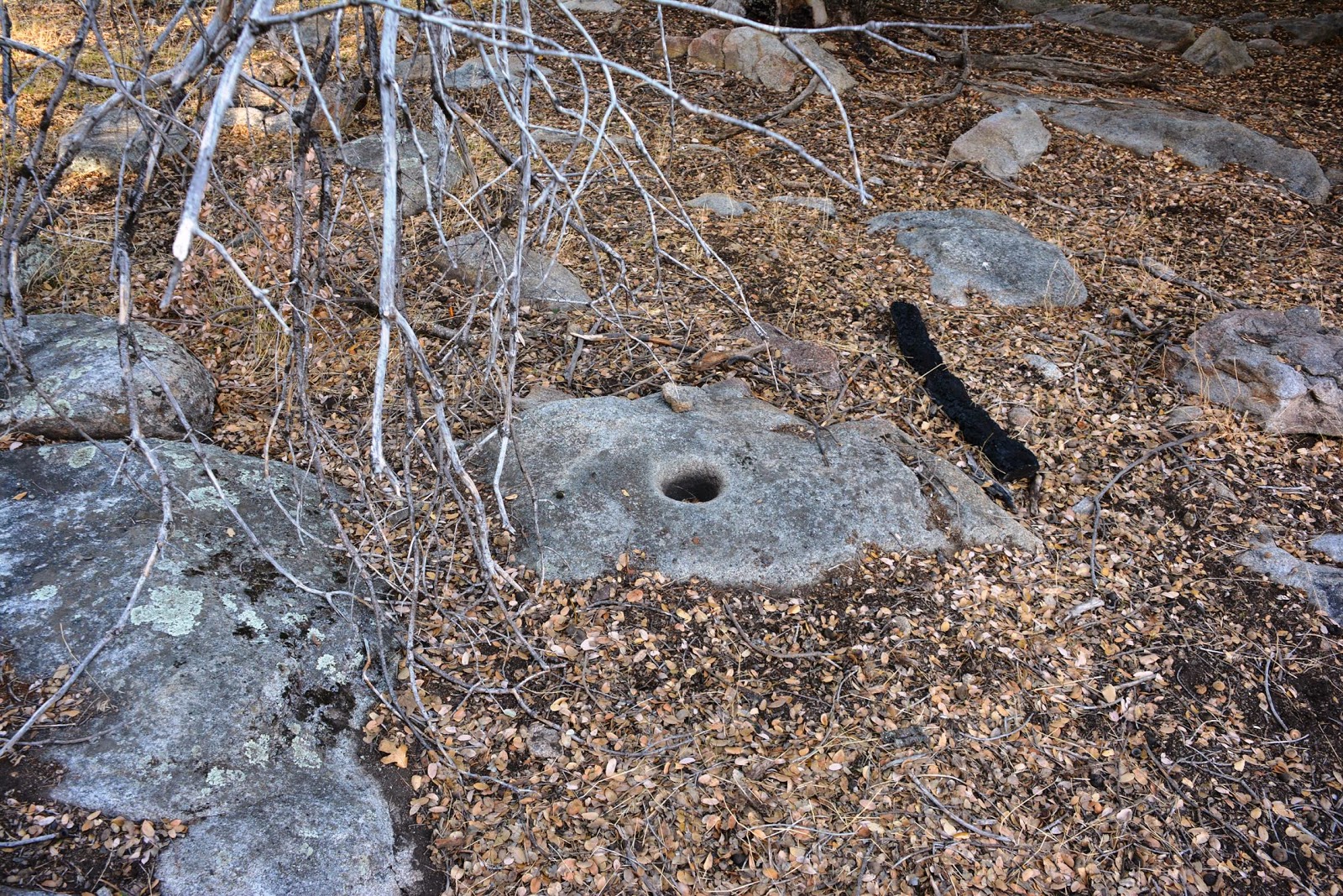 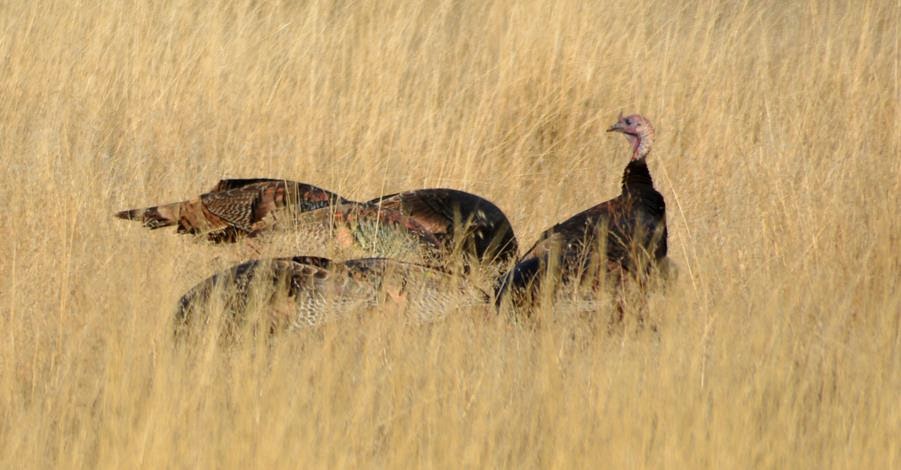