On this day we were at the far end of the lake (many miles away from the London Bridge) checking out a camp ground. It was pretty desolate here, but beautiful.  Although I took quite a few photos, the thing that caught my eye was this Heron. It caught my eye because it was following us around. 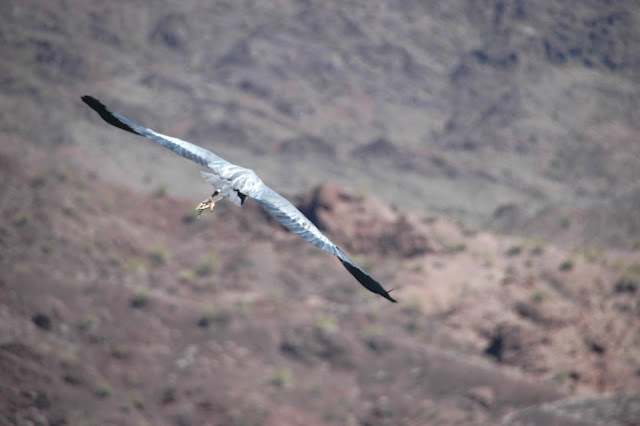 They look a little ungainly when walking, taking off, or landing, but in flight they are amazing. 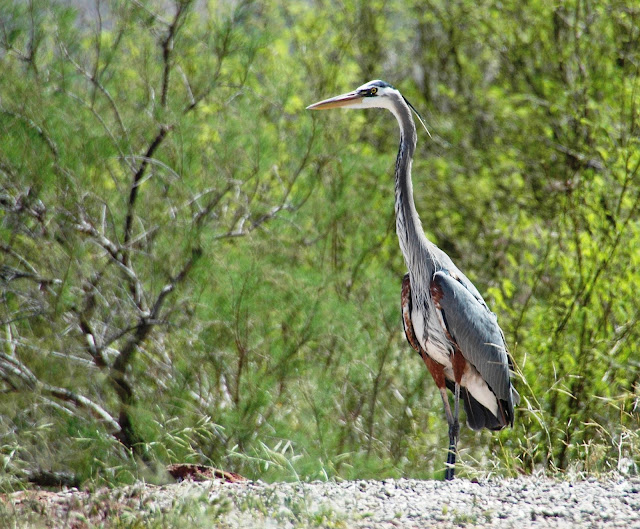 This is a nice one to enlarge. 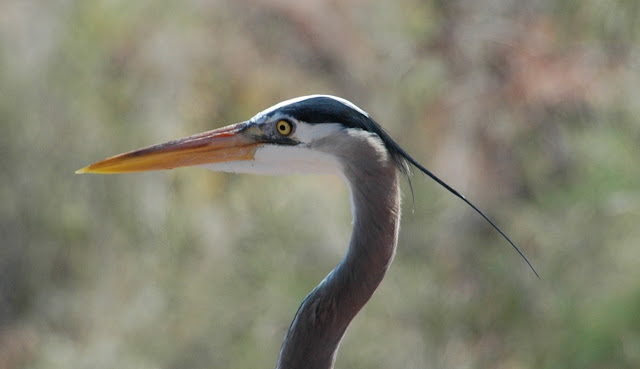 This one as well. 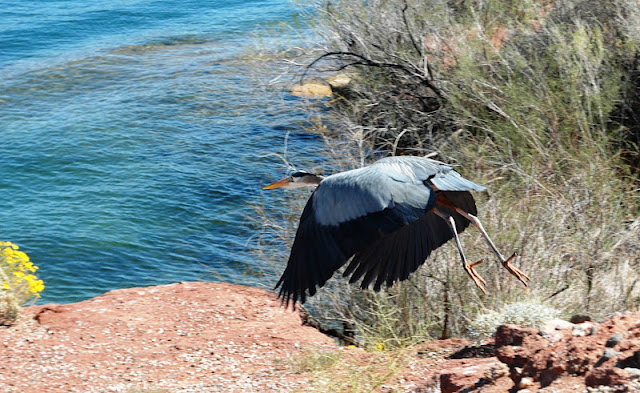 If you forget about his feet, he looks kinda like of the Mondoshawans from the Fifth Element. That is, IF a Mondoshawan could fly. I know most of you are thinking" What the heck is a Mondoshawan and has Tillett lost what little mind he had left after the 60's and 70's?"  As long as we're on the subject, does anybody out there know what a Mondoshawan is. Without googling it, that is? 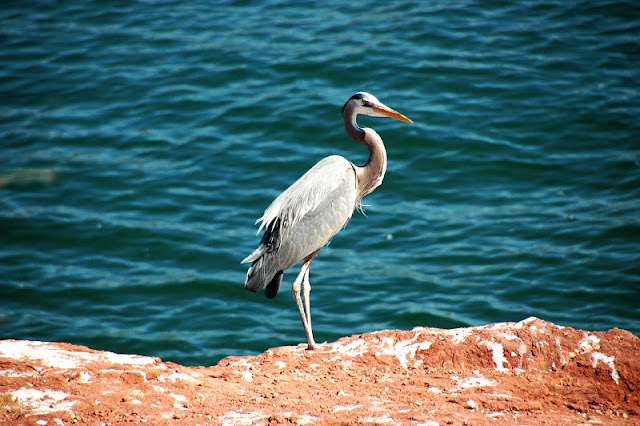 Even though I take quite a few photos of birds, I know very little about them.  I know this guy is a Heron, but I'm sure there are many kinds. 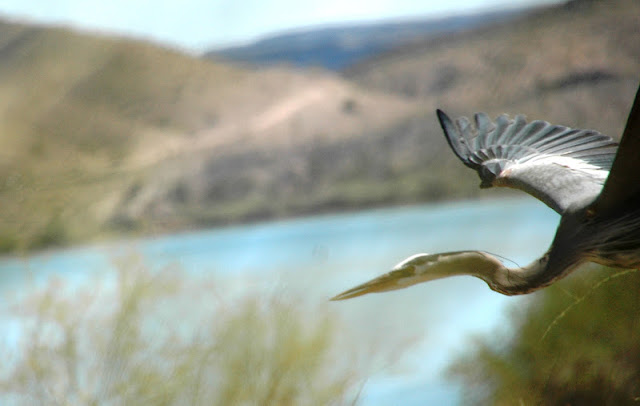 This was so close to being an AMAZING photo. I had to shoot from the hip because he surprised me. Like the Hawk I tried to photograph when we were in Sedona, I took three shots in rapid succession, without really aiming. I got one of the blue sky (with nothing in it), one of my knee, and this! Even thought it didn't work out, I LOVE the textures and colors in his wing. 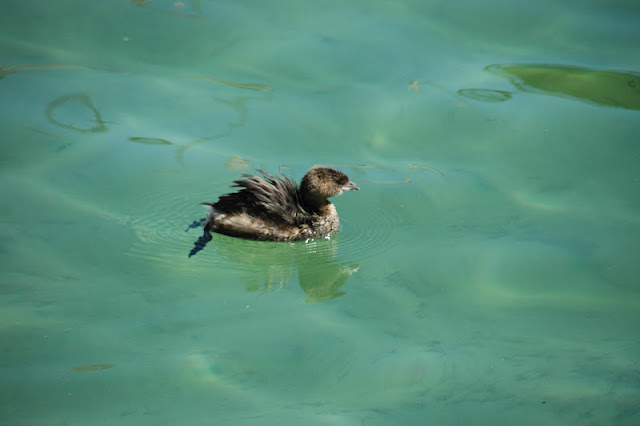 I see blog posts and blog references about this TV show all over the Internet. I admit in advance that I'm out of the loop on a lot of things, but seriously, I've seen this show and I've tried to get "into it" for quite a while. I'm just as geeky as the next guy and I love science fiction, but I still don't have a single clue what the big deal about this show is...   Is it just me?
.
Posted by Pat Tillett at 4:00 AM 44 comments:

First off, we aren't in Yuma this week, like I said we would be. We had some technical difficulties and couldn't go. This post is from a hike we took a while back in the Anza Borrego desert in Southern California.  It was to a isolated oasis in a place called Palm Canyon. It's one of those hikes that can be either easy, medium, or advanced, depending on how far you go and which route you take. We went a lot further than I thought we would and ended up  hiking about 6.5 miles with 1,400-foot gain in elevation. It was pretty hard actually, and NOT a thing to be attempted during the hot summer months. 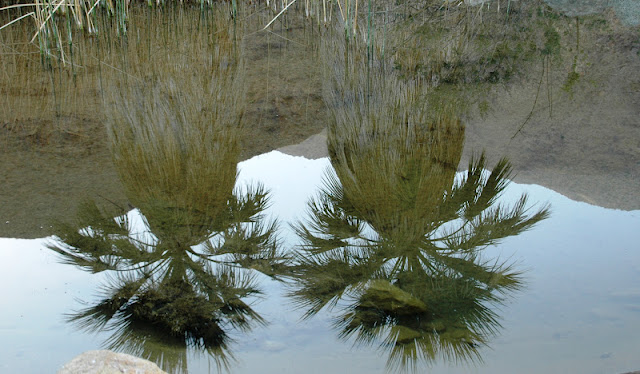 These photos are going to be like a Quinton Tarantino movie. First the answer and then the questions.  This photo and the next one, are the pay off after a long hard uphill hike. 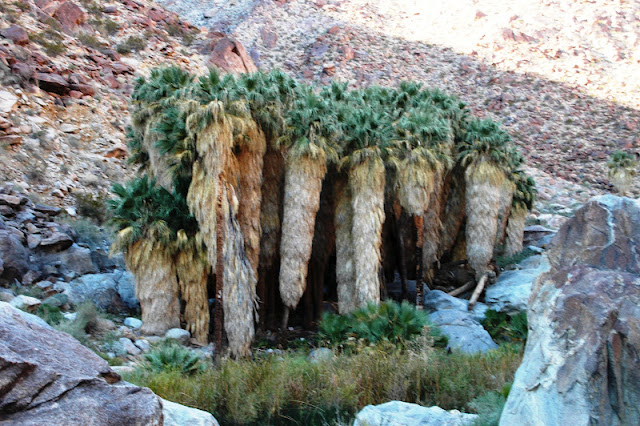 Here is the rest of the pay off. It's an actual oasis in the absolute middle of nowhere, in an amazingly harsh desert climate. This stand of palms is the only one featuring palm trees that are native to California. It was so cool and shady under those trees. 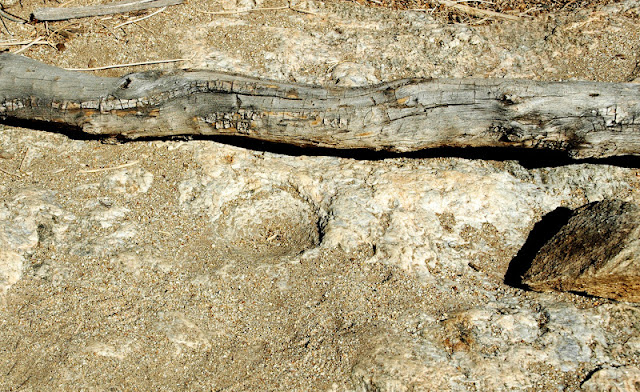 The round depression in the rock was used to grind grain seeds for hundreds of years. They are called mortars or morteros. Several different tribes settled here over the centuries because of the availability of water, in an otherwise totally arid environment. 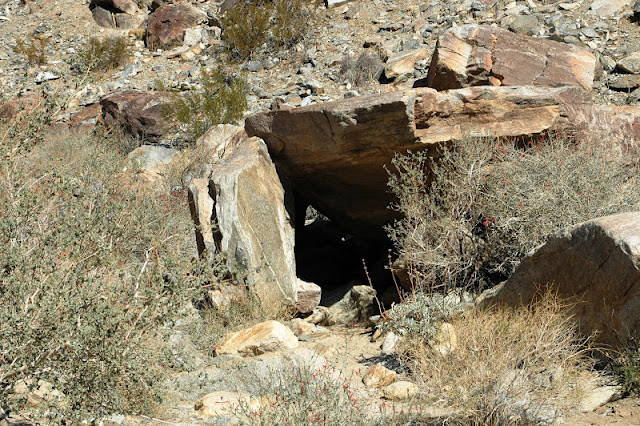 This is where we spent the night. Just kidding! 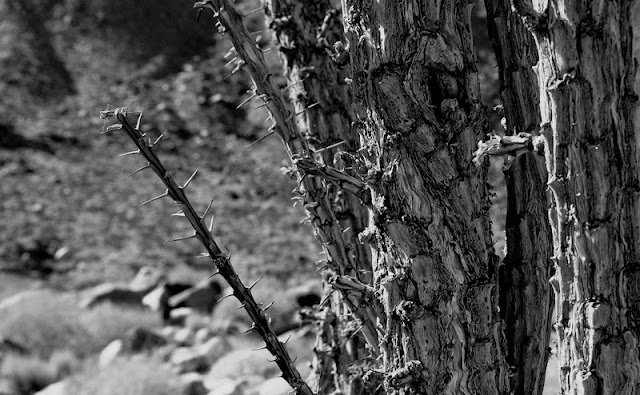 Of course, there has to be at least one black and white. 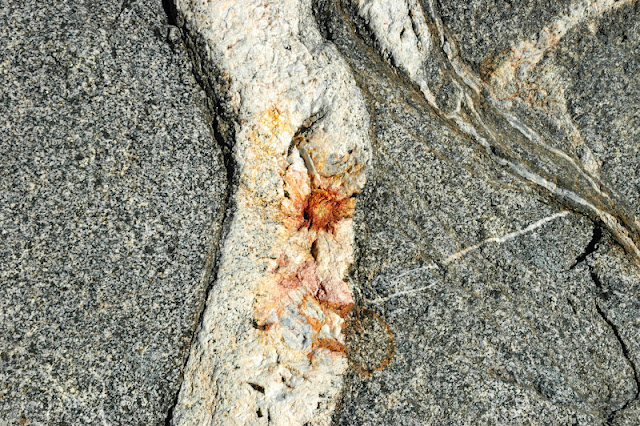 Only because I liked the colors. 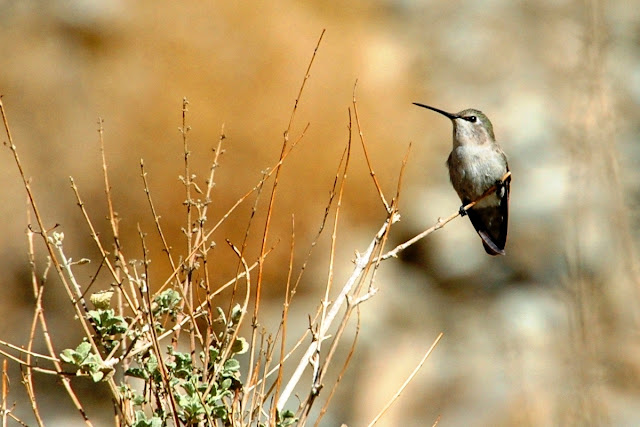 I didn't expect to see humming birds in the canyon. 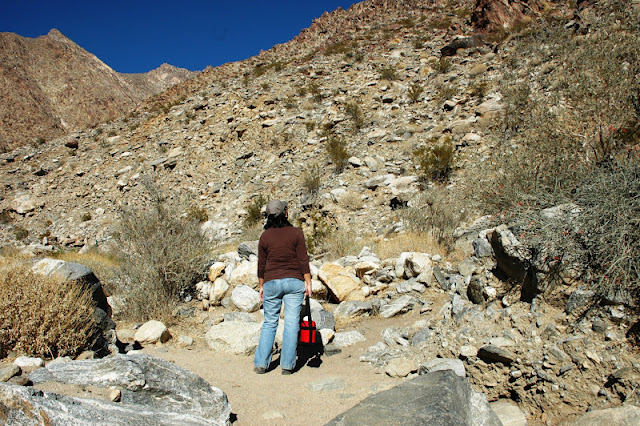 We gotta hike over that?  Not really, my wife is looking for mountain sheep. We only have to hike around it. 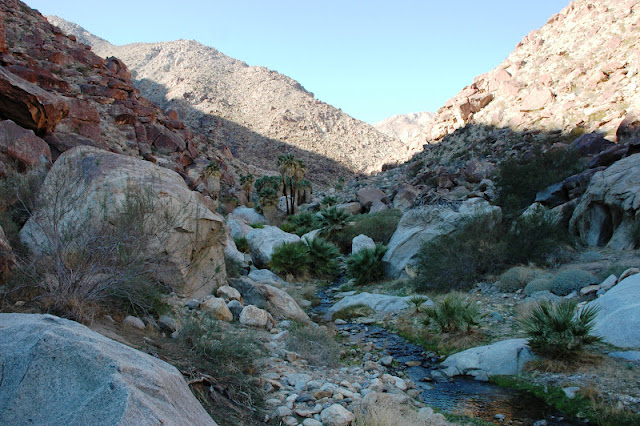 Our first view of the natural spring running down hill. 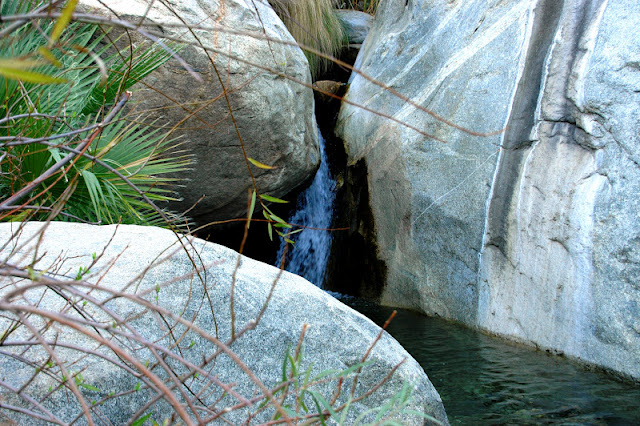 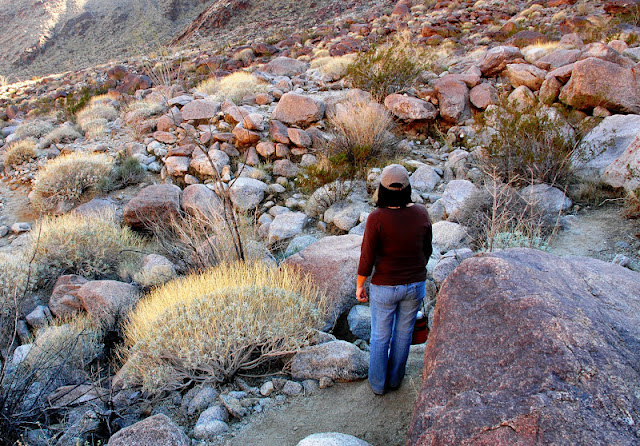 We took a different route back out of the canyon. This one was a lot more steep and very rough. My wife is deciding which way to go. She's a good trailblazer... 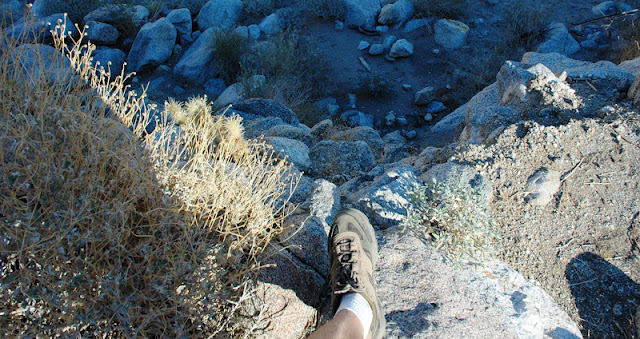 To some of you, this post will not be a surprise at all. To others, it will be a TOTAL surprise. I'm sure most of you remember the song "London Bridges Falling Down" from when you were a child.  I'm also sure that many of don't know that the London Bridge now resides in the middle of nowhere, in the Sonora desert of Arizona! 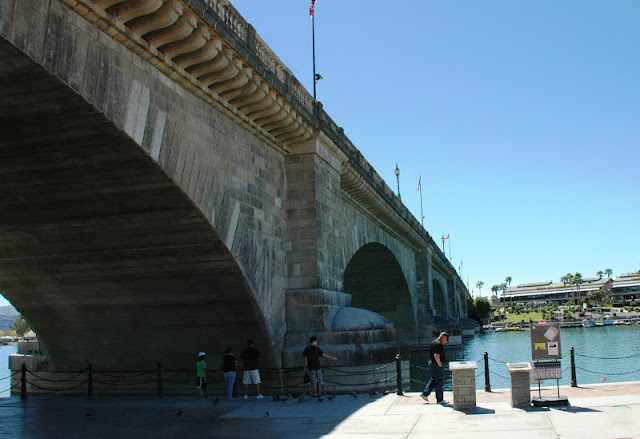 Well, the London Bridge didn't fall down, it was moved to Lake Havasu city in Arizona, USA. 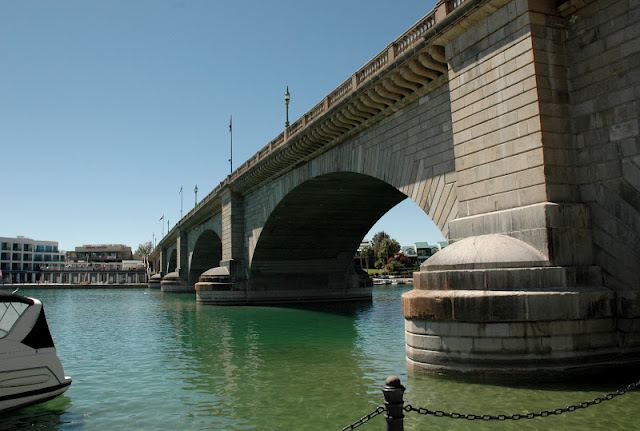 It first opened in London in 1831 and spanned the Thames river. 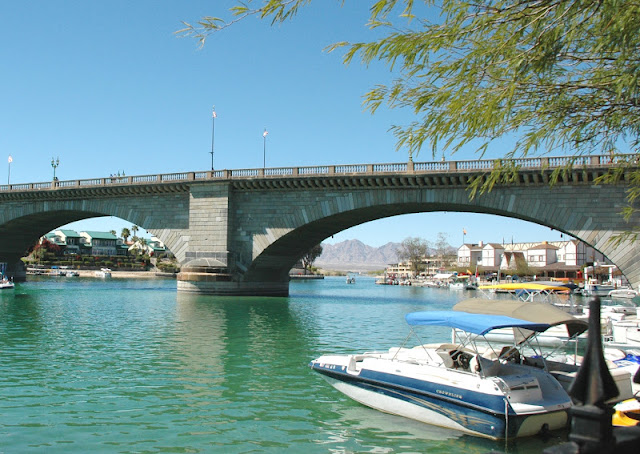 In 1968 the bridge was sold to an American entrepreneur for about 2.5 million dollars. 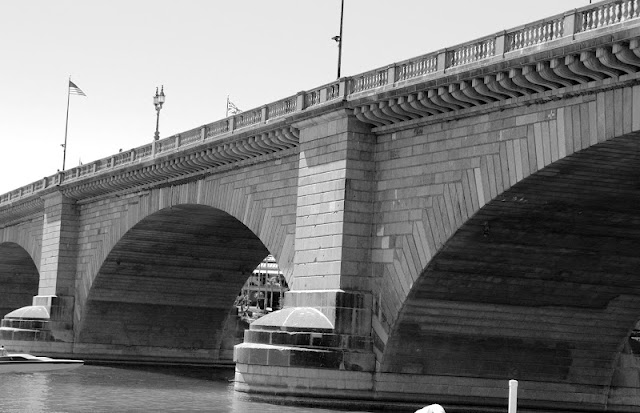 The bridge was taken totally apart and moved stone by stone to Lake Havasu City. It was re-assembled and opened in 1971. 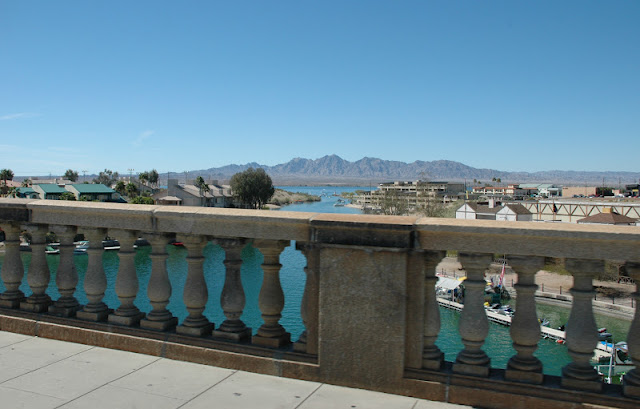