We were on our way from Kingman to the Ghost Town of Chloride, Arizona. The highway is very desolate and goes from A to B with very little in between. Well, there was this billboard by the side of the road. Santa Claus Arizona? For sale? This was most certainly worth a closer look.

I apologize in advance for the poor photo quality. Technical gremlins were at work that day.  Maybe, they were the ghosts of unemployed Christmas elves. 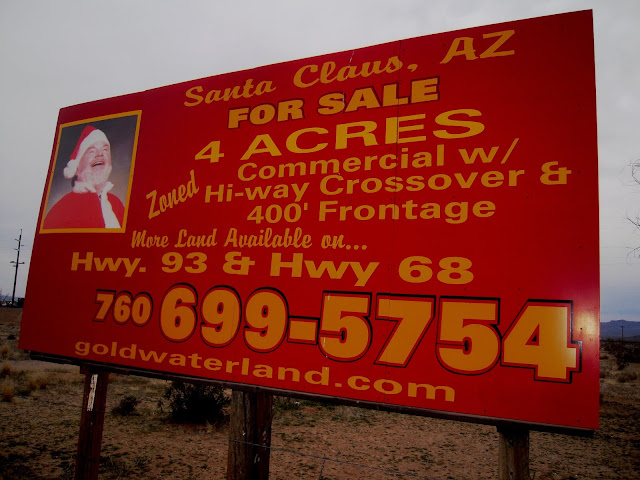 Apparently, the town of Santa Claus was established in the mid 1930's by a real estate developer named Nina Talbot. The idea was to draw people to her land office by disguising it as a tourist attraction. There was food, a place to spend the night and rides for the kids. Maybe oddest of all was the fact that Santa Claus was available everyday of the year. Mind you now, place is in the middle of the desert, yet the owner was sure she could sell lots and actually establish a growing town here. She was wrong... 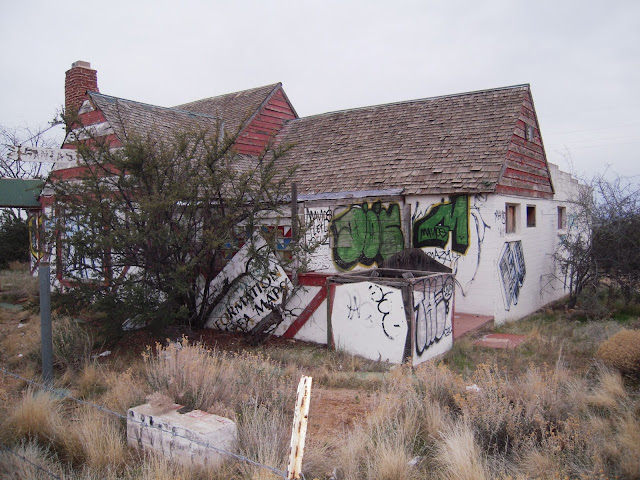 If we would have found this place about 20 years earlier, I understand we would have still seen the little cars used in the rides and some other things. 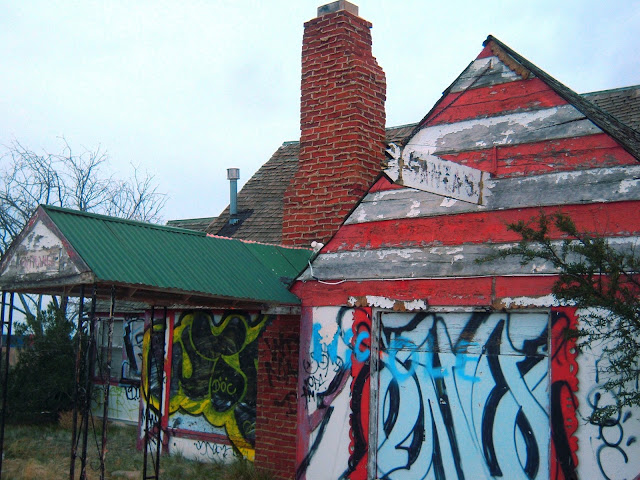 Apparently, Ms. Talbot's grand plan never panned out and after losing her shirt, she sold the town in 1949. The new owners kept this building open as a restaurant and it operated for several more years. 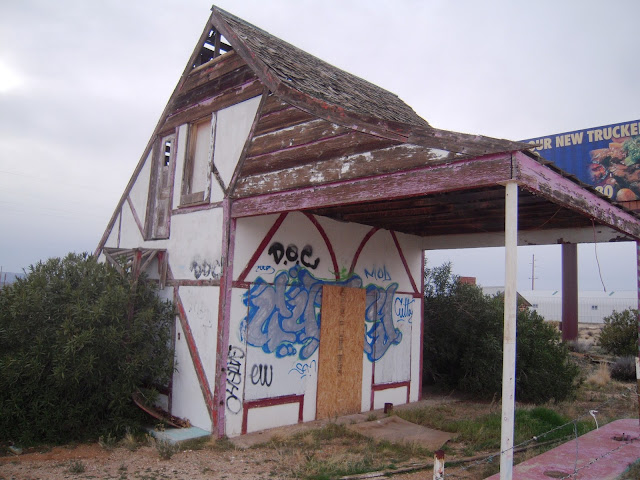 In 1950, world famous science fiction writer Robert Heinlein wrote a short story, either about this place, or this place was in the story. Either way, I'm looking for it now. 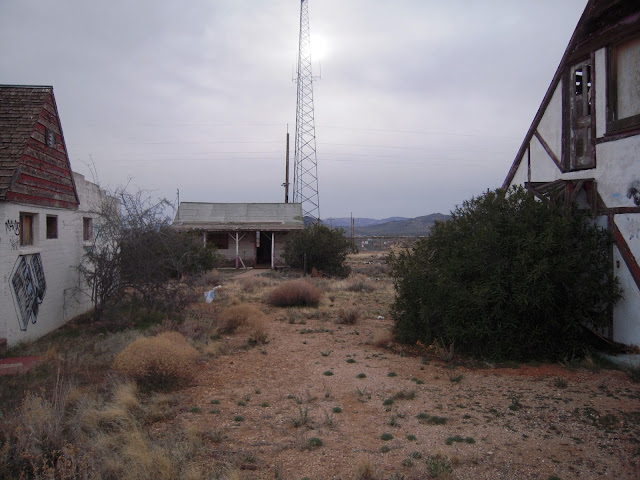 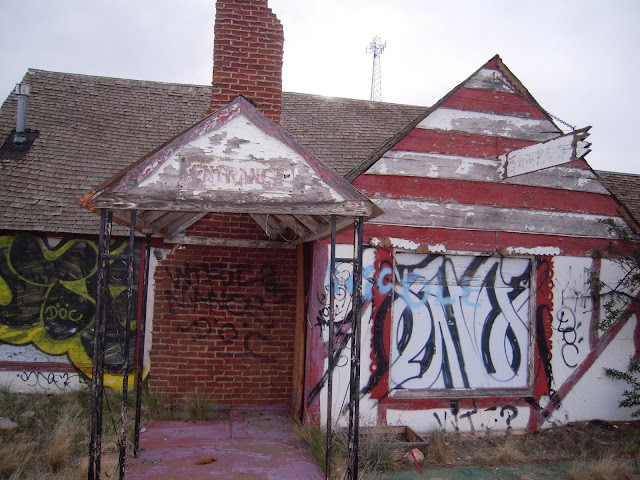 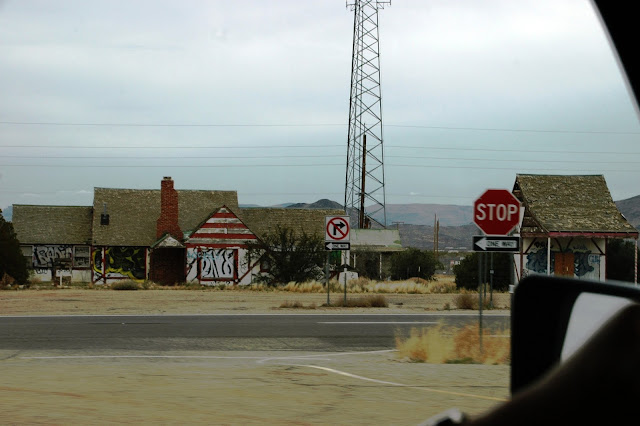 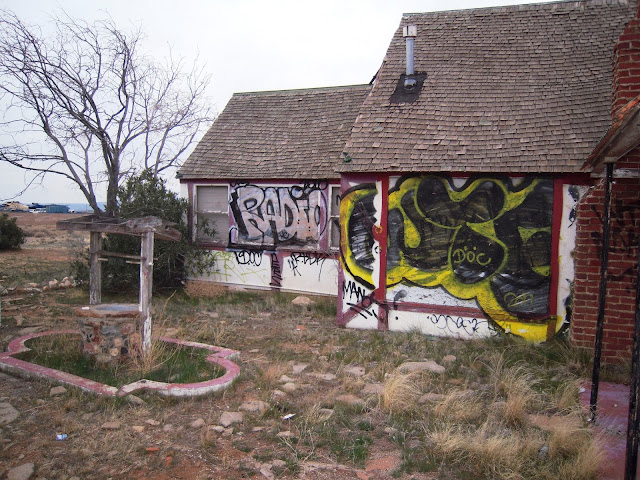 You NEVER, EVER know what you are going to find in the desert...

Some of you might just want to look at the photos and ignore the rest, because I'm going to vent for a bit. If you do comment and it's just about the photos, I understand.

The very south western portion of Arizona and the south eastern portion of California have a lot in common. The area is the largest producer of winter vegetables in the world and provides over 90% of the winter vegetables eaten in the United States.  One other thing they share is that almost all of the work is done by migrant Hispanics. I have no way of knowing who is here legally and who is not, but I do know that many of them cross the border legally everyday to come to work.

Something else I know is that there aren't enough people to work the fields. This area (and many others) have actually had to cut back on the number of acres planted at any given time because of manpower shortages. The local folks don't want to do it, the non-Hispanics don't want to do it and there just aren't any white migrant workers any more. 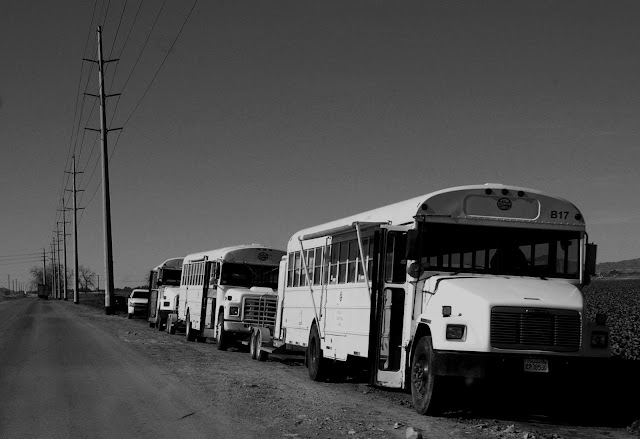 Yuma is so close to the border that it seems to have fewer manpower problems than agricultural areas in other parts of the country. Based on what I've seen, read and heard, the migrants here usually fall into one of four categories. 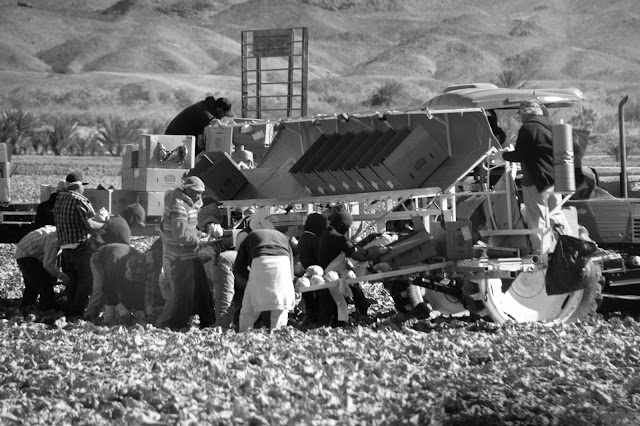 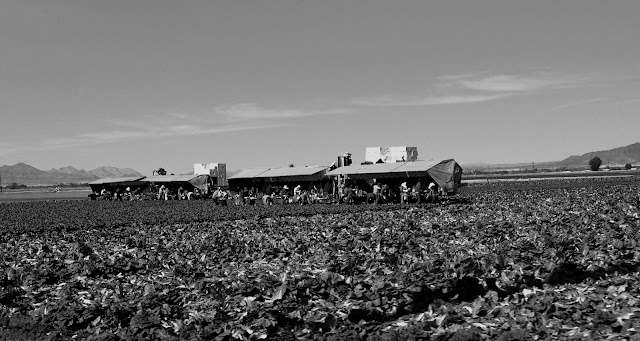 Oh yeah, these folks don't just work, they bust their humps every day in brutal conditions. Long hours, low pay, pesticides, various other chemicals, back breaking work and the realization that they are at the absolute bottom of the economic totem pole in a multi-billion dollar industry. 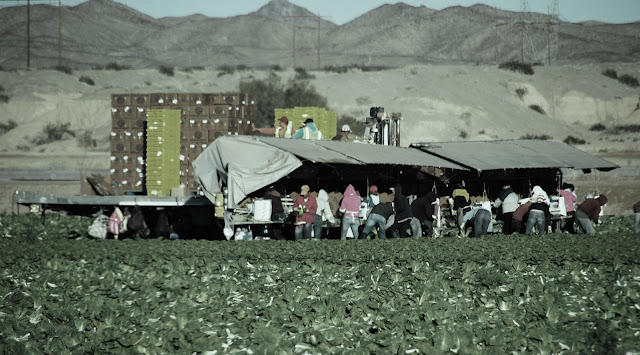 At first glance it looks like the company at least gives them some shade to work in, but It isn't exactly what it looks like. That contraption giving them some shade (if they're lucky) is MOVING and it doesn't stop.  I've worked a lot of jobs in my life. Many of them involved VERY hard work. I've spent a lot of time watching these folks and there are middle aged ladies in this group who could work me into the ground on my best day.

The thing that struck me the most (and not in a good way) is that the unemployment percentage in the Yuma area is almost 30%! It doesn't make a lot of sense to me that they don't require some of the recipients of unemployment benefits to take those jobs. I especially don't understand it when I think about the Arizona state stance on the subject.   I've heard people say more than a few times, that "those people are taking our jobs!"  Maybe it's just me, but I've NEVER heard any parents that I know say, "I sure hope Junior grows up to be a field worker."  I'm not trying to make a political statement here, but I live in southern California and as you know I spend a lot of time traveling around the southwestern part of the country.  In most of these areas; if all the illegal/undocumented immigrants (from Mexico alone) were sent packing. Our economy would grind to an immediate halt.  The state of Arizona estimates that about 10% of their TOTAL workforce is made up of illegal aliens. Some folks there are also quick to point out that the percentage of unemployed Arizonan citizens is about 9% and simply removing the illegals would solve the unemployment problem.  Seriously? 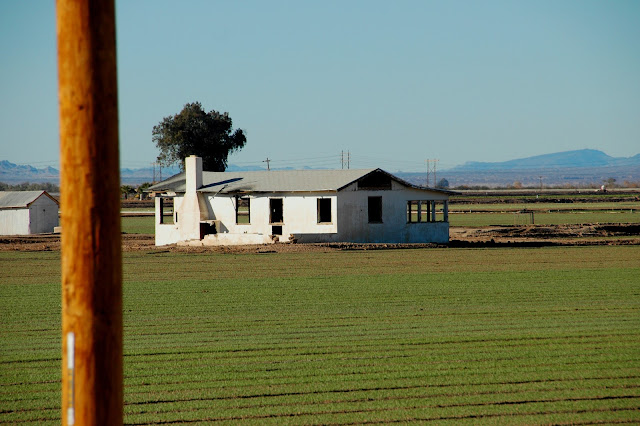 Just one more little issue that bugs me. At one time, this house belonged to a farm owner. This sight can be seen all over our country. Do you think the huge corporate farms that either bought, or forced out the small farmers have even the slightest problem hiring illegal immigrants who go there for work? I don't think they care in the slightest. I'm sure that some of them would probably like to import Chinese slave labor and make even larger profits.

I'm not sure if I've ever ventured into political waters before on this blog and I don't mean to do so now. I KNOW there are huge problems with our immigration policies and enforcement, but I don't think either political party in this country really and truly even thinks it's a problem. If it was, they would have fixed it years ago.  Most of these folks come here for some of the same reasons our ancestors did. It's the land of opportunity.  Most of them are dedicated family folks, who just want their families to survive.  If you've ever been to Mexico, you know what I'm talking about. Poor, totally corrupt and full of people that are desperately poor.

*"Snuck."  I know this is one of those modern day words that has made it's way into our dictionaries and many folks shiver every time they see it in a sentence. It's kind of like starting a sentence with a conjunction. Things have changed...

You Do Not Want to Serve Your Prison Sentence Here

If you were a murderer, cattle rustler, stage robber, or even your average convicted adulterer (boy have times ever changed);  this is not the prison you wanted to be sentenced to. Sorry about that, because it was the only “prison” in the southwestern part of the country.   If you've ever viewed even a few American Westerns or “cowboy” movies, you've probably heard this place being referenced.

I apologize about the glaring sky in this photo. I hope you brought sunglasses. 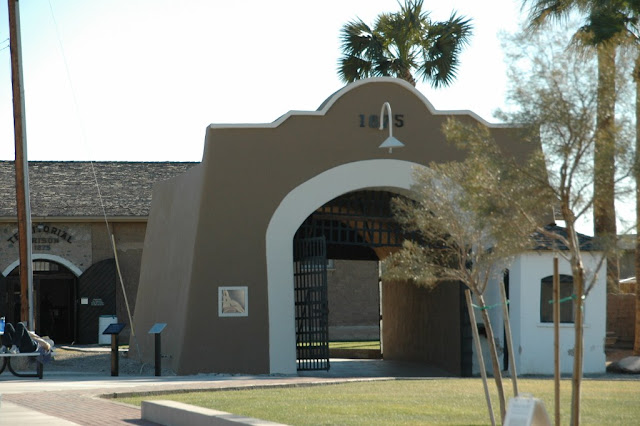 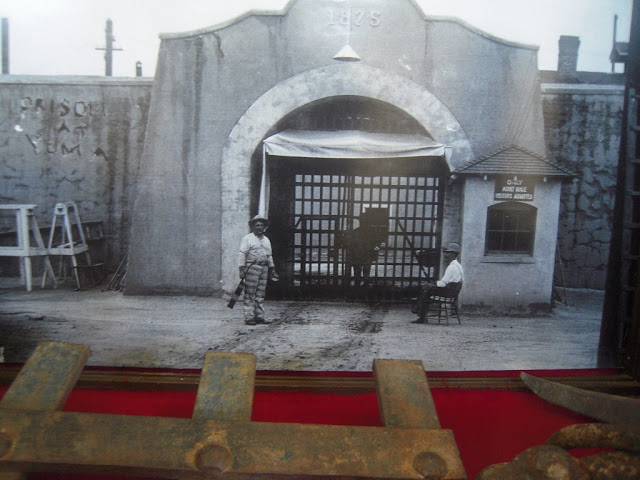 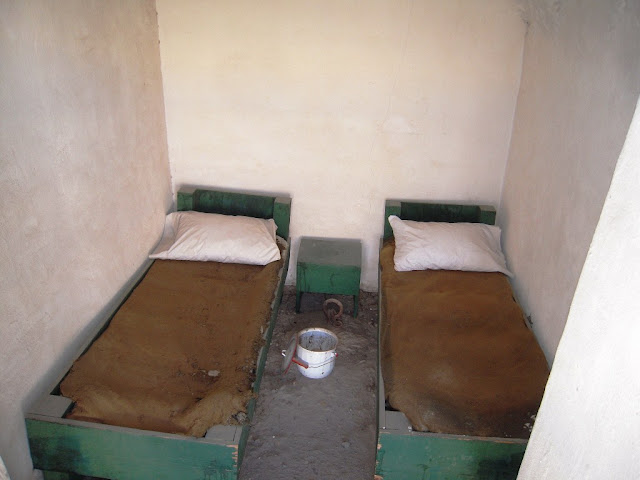 The prison was isolated in the middle of the Sonoran Desert, where blistering summertime temperatures average over 100 degrees.  Being locked in a cell with up to 5 other men, with a bucket for a toilet (changed once a day if you were lucky); is not where I would want to be when it’s blistering hot. From what we saw, the cell looked pretty good, because... 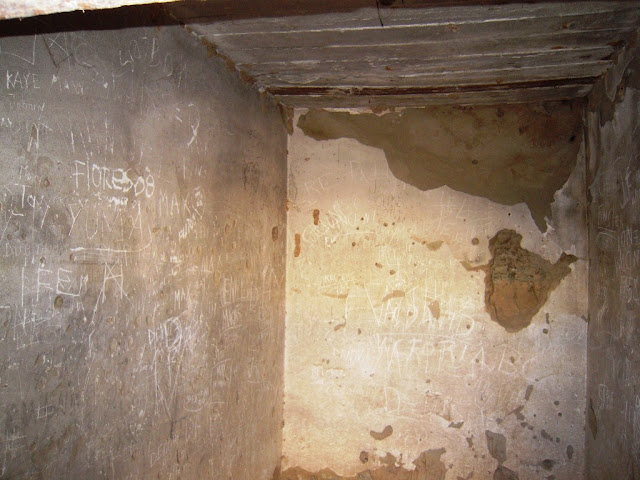 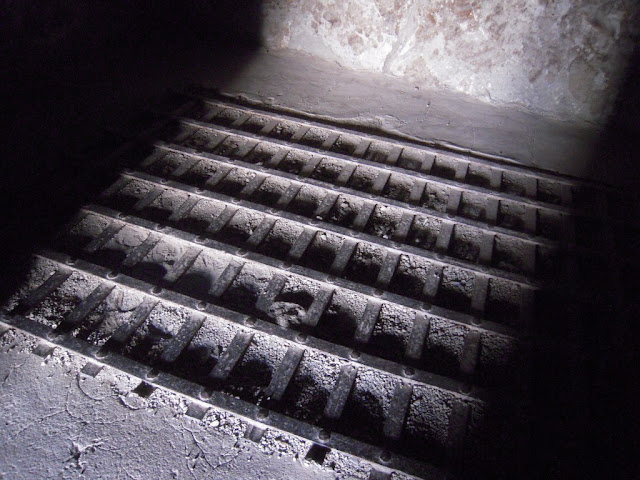 This cell was called the “snake pit” or “hell hole” and was probably the worst thing that could happen to you.  The iron grating on the floor is what is left of the ten by ten feet, iron box that was in this room. The walls and top were made of the same material.  When they really wanted to punish you, they threw you in here; unfortunately you weren't always in there alone.  Anybody else who needed “special” treatment was also in there with you and sometimes there were several men in there at once.  Stripped down to their underwear and given bread and water once a day.  The only light came from a small open vent in the ceiling. The worst thing was the fact that they didn't even have a bucket. You just did your business right there in the cage, on the floor.  Imagine the fragrance of that after a few 100 degree days!  I just triggered my own gag reflex!  Believe me, that isn't easy... 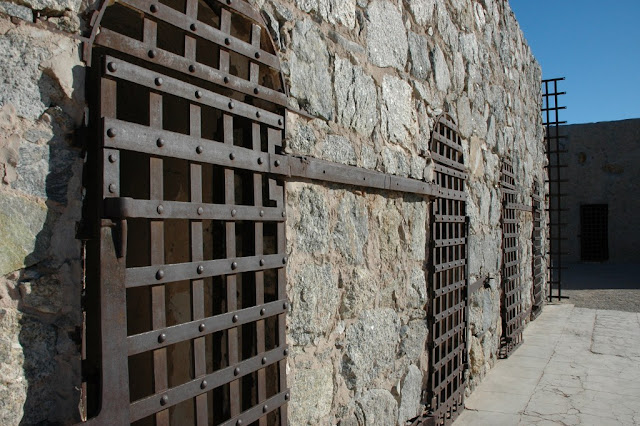 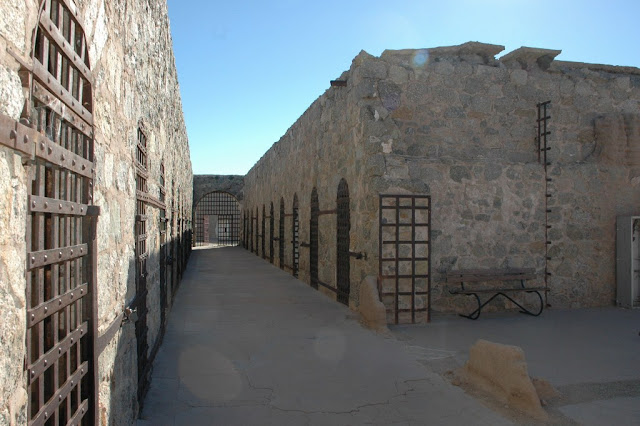 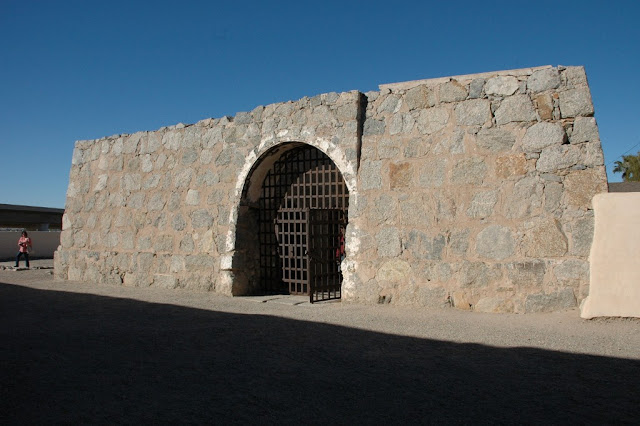 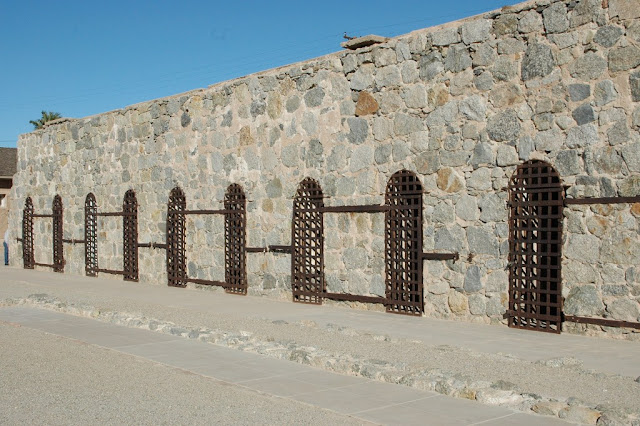 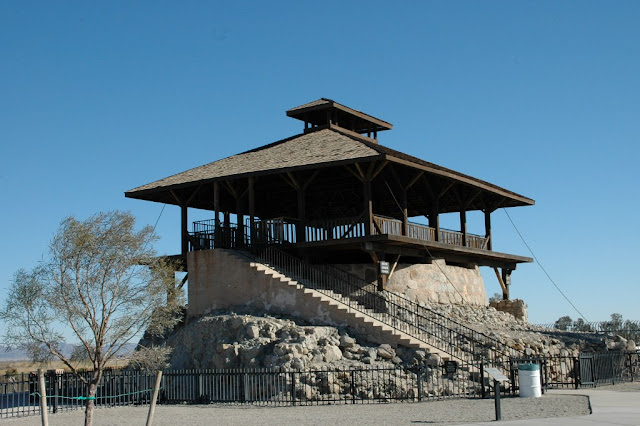 Escaping wasn't a very good option because the place was surrounded by desert. If you did happen to escape (and many tried), they were usually hunted down (for money) by the local Indian tribe.

The prison was opened in 1876 and the last prisoner was discharged in 1919. After the prison closed, the city of Yuma used it as the local High School (after their school was destroyed) for a while. That’s pretty weird, right?  Can you guess what the school’s sports teams were known as? Yep! The Yuma Criminals!  The name stuck and it is still the school mascot today! 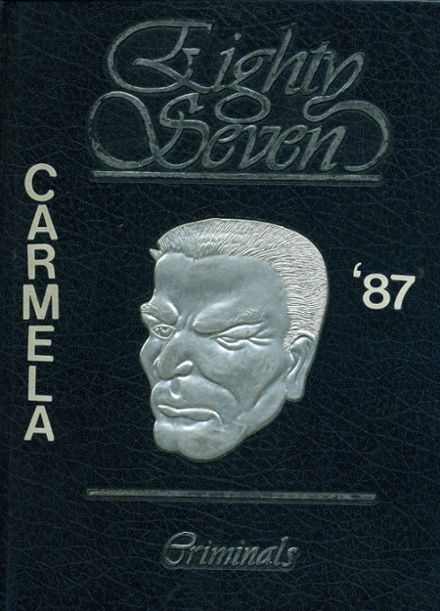 ------------------------
Although the prison was a terrible place and a lot of crazy things went on there, I think the oddest thing we found that day related to the Yuma High School mascot. Seriously, isn't that odd? When combined with other things we've learned about Arizona recently, maybe it isn't really isn't all that odd...

Don't get me wrong, being different is one of the great things about this state. You never know who you are going to run into, or what you are going to see.
--------------------------
Speaking of the Arizona desert. We are back in Arizona again. Same state, different desert. This time the Mojave. We've put a lot of miles on the jeep since we got here a week ago and have seen some great and interesting things...