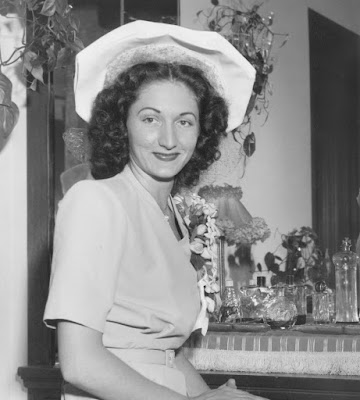 No way I can put everything noteworthy about my mom in one post. What follows is a thumbnail sketch of the woman...


My mother was an extremely harsh woman. She was smart, funny, attractive, and could handle herself quite well in a bar fight. She could be on top of the world one moment and totally miserable the next. Either way we, as her children got nothing positive from her. These things made her hard to love and even harder to like. If clinically examined today, I'm sure she would be diagnosed with Bi-Polar and Border Line Personality Disorder at a minimum.

I've been told that she had some good traits, but I assure you, none of them were used in her mothering. If she had any compassion at all, I never saw it. She was an alcoholic and "pioneer" drug user who would disappear, without leaving any money or food in the house at all.  We pretty much grew up on welfare.

In her later years, when there was no men to "support" her (wink wink), she did in fact have a job. Before that she was a bar maid. When not working in that capacity, she was still usually in a bar. Actually, she was in many bars. She was known in all the bars in North Long Beach as a regular, if not a current or former employee.

Although there was a constant stream of men in and out of my moms life after she split up with my Dad, none of them stuck. None of them became a father figure. I can't even begin to recall how many phone calls we had to make (when we had a phone), to the local bars, trying to find her. There was one very important part of motherhood she seemed to forget. That part involved FOOD...

Sometimes people at the bars would try to find her for us. It got to the point where we were neither traumatized, or worried at all, when we couldn't find her. We just made due with what we could dig up. I recall that my older brother became pretty good at macaroni and cheese.  Many times it was just cheese.  There was always plenty of cheese around.  It came in five pound boxes from the county.

My mom had four children, all of us boys. As I said before, she was an extremely hard woman. To make it worse, she hated men. Although she always had men in her life, she clearly didn't like them. Four boys, four different fathers and all of us males...

My mom has been dead for over eighteen years, and we still don't all agree on who was fathered by whom. My older brother's father was a sailor. My father was another sailor. One of my younger brothers was fathered by a truck driver. My other younger brother thinks his father and mine were the same, but that's impossible. The person who my older brother and I think may be his father, was another sailor, but we're not sure if the time frame lines up. There was also a long standing rumor around the bars of North Long Beach that my father was actually a local mailman. That wouldn't have bothered me at all, because I knew the guy many years later. He was one of the funniest and nicest people I ever met.

There is one thing that we are pretty sure about though, my mom may have been a prostitute.  She had a steady stream of men in and out of her life. And they provided things, including money. I know at least a small amount of these things went to us. So although we know that she did in fact give sex in exchange for things, I don't condemn her for it.

I do however condemn her for other things.
Two things, above all others...
Those were the lies she kept alive for 35 years, to keep my father and I apart.