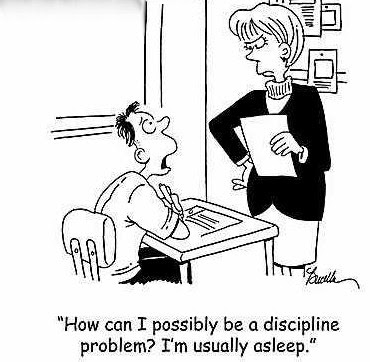 Junior high school was not such a good time for me either. My older brother was in the Navy and my youngest brother was put up for adoption. So it was just me, my other younger brother Tim, and my mom. Sitting here right now I have no memory what-so-ever of Tim during that time frame. That seems so weird to me, I know we weren’t close; nobody in my family was, but still…

Based on my mom’s insistence I was already working part-time jobs and had my daily paper route. I’d also been ditching school on and off since fourth grade. How do you get away with ditching in fourth grade, you ask?  I'll tell you...

Just like everybody else, I’d bring home papers to get my mom’s signature, before returning them to school. My mom wouldn’t sign them, or she’d lose them, or just throw them away.  So to stay out of trouble at school, I'd sign them.  Also, if I missed a day of school she would make me write the note and then she’d sign it. I got tired of  that also, so I started signing them myself.  I’m sure I’ve already said that my mom was not home a great deal of the time. It hit me that I could create a note and sign it with her signature when I wasn’t really sick, just as easy as I could when I was. And then it started. During elementary I usually did go to school and only ditched every so often.
During seventh grade I ditched quite a bit, but still managed to go to school enough to stay off the radar.  The next grade was another story altogether. I usually went on scheduled test days and when my mom happened to be home, but I ditched a lot more than I went. Through the various school years my report cards reflected my high number of absences, but no matter because my mom never saw them! I usually did well grade wise because school was always extremely easy for me. I loved to read and what I knew about most subjects went well beyond what they were teaching us anyway.

One bright and sunny day towards the end of 8th grade, I’m sitting in one of my classes day dreaming and not paying much attention to what was going on. My teacher approaches me and sends me to the office. No big deal, I’d been in trouble plenty of times. The ladies in the office knew me well and when I walked in they sent me to the conference room.

When I got to the room, there were several people in there already. One of them was my mom! Oh crap! The principal was there, my counselor and my home room teacher were there, and a couple of people I’d never seen before, were there. I’m told to sit down. I can feel my mom’s glare burning tissue on the inside of the back of my skull. She’s got that look that only a person in my family would recognize. It’s not quite her crazy look, but close to it. I knew the meaning quite clearly. It was the “you wait until I get your f'ing ass home” look. My mother can “function” in public when she’s like this, but she’s at the edge. I wouldn’t have been surprised if she jumped over the table to get at me. Looking back, I wish she would have. It might have told those other people things that I wouldn’t dare complain about to them.

The principal said “let’s get started. Patrick, do you mind if I call you Pat?”
Interesting, because every other time I’d seen him he just referred to me as Mr. Tillett. I just shrugged my shoulders. “Makes no difference to me” I said, sounding only slightly sarcastic.

As he pointed to the two strangers he said “these two gentlemen are the school district psychiatrist and medical director.”  I still didn't know what the heck is going on, but it wasn't sounding good.
The principal swept his hands over a couple of piles of paper sitting in front of him and tells me that they reflect everything I’ve done while in junior high. He puts his hand on one pile and says “here I have your attendance records and the written and signed excuses relating to each of your absences.”

I know I’m in deep shit now. He proceeds to go over each and every day I didn’t come to school. He then holds up the written and signed notes from my mom that relate to them.
“Mrs. Tillett, did you write this note??
“No!”
“Mrs. Tillett, is that your signature on the bottom of the note?”
“No!”
“Patrick, did you write these notes?”
“Yes.”
“Did you sign your mother’s signature on these notes?”
“Yes.”
“Why?” he asked.
“I don’t like school” I replied. I knew better than to implicate my mom in this. I wanted to say I signed them because she was seldom around.
“Why don’t you like school?” he asked me.
“I have to walk a long way and it’s not worth it because it’s boring.”
He looks at my mom and asks her if she was aware that I had missed so much school. She of course had no idea. He then asks me to go back to the office for a few minutes, while they talk.

After about an hour the phone rings and one of the ladies tells me they want me to go back to the meeting. I went back in and sat down. The principal tells me that I’m going to have some meetings with the district psychiatrist and some other people. He goes on to tell me that they’ve already scheduled the meetings and I’m expected to be there. He looked directly at my mom when he said that. I wanted to laugh at that, because I knew full well that if I went, she’d have nothing to do with it. He also told me that they requested of my mom, that she and I not talk about the absences, or any of what was discussed in the meeting while we were at home. The meetings were scheduled for the following week. He then asked me if I had any questions. I told him I didn’t, but I would have liked to find out where I slipped up with my “notes.”

It’s the following Monday morning and I’m at the school district offices downtown. Of course my mom had nothing to do with me being there. I had to use my own money and take the bus. During the meetings the psychiatrist asked me a million questions about myself, school, my mom, my home life, and a bunch of other things that made no sense at all. I answered every question truthfully. That is, I answered every question truthfully that wasn’t about my mom or my home life. No way in the world I’m going to tell him a thing about what went on in our house. That would be like signing my own death warrant. “Everything is good at home. Just like every other family,” I lied. I could hear my mom’s words ringing in my ears, “what happens in our family is nobody else’s fucking business!” I always took that as the threat it was intended to be and abided by it. Her reminder the night before “helped” me remember…

I also met with a couple of other people at the school district that first day. They told me I wasn’t to go to school for the rest of the week, but to report there instead. They gave me a “permission slip” that I could show to any truant officer or policeman who might stop me and wonder why I wasn’t in school. Then they gave me several written and oral tests. A lot of it made no sense to me. I figured they were trying to find out if I was crazy. Some of the tests were very similar to the standardized tests we took in class every year.  One of them told me he had interviewed all of my teachers, asking them various questions about me. He said that some of my teachers said I had a bad habit of correcting them in class. He followed that statement by asking me if I thought I was smarter than my teachers. He actually smiled when I replied "not all of them."
When Friday finally came, they tell me to report back downtown just one more time on the following Monday.

It’s Monday morning and after the psychiatrist talks to me for a short time, he says we have to go to a “follow-up” meeting upstairs. We go to a conference room much nicer than the one at my school. Sitting in the room is the same cast of characters as the original meeting at my school. The principal opens the meeting and he’s mostly talking to my mom. He says that after taking an exhaustive battery of psychiatric tests and the 8th grade competency exam, that I’m already well beyond the 8th grade level scholastically. Further, I had tested in the 99th percentile nationally on the standardized tests in every subject but English. He also said that because I was already bigger than most 8th graders, they were going to offer me a “social promotion” to the ninth grade. Unless I wanted to, I didn’t have to finish out the 8th grade school year. You know I didn’t…

I thought the overall results were fantastic. I had already missed over half of 8th grade already. And now I could legally miss the rest of it. Even my mom didn’t seem angry about anything. On the bus ride home she very calmly and pleasantly told me that she "wished I’d never been born."

Some other time her acid remarks might have hurt me, but at that moment I was already thinking about what I would have to do to take the 9th grade competency test, so I could skip that year also...
Posted by Pat Tillett at 7:00 AM