On 12/7/1922, a plane carrying US Army Colonel, Francis Marshall, took off from North Island airbase, in San Diego Harbor for an inspection of army posts in  Arizona. The De Havilland DH-4B, Bi-Plane was piloted by Lt. Colonel Charles Webber. The plane took off in poor weather and didn't make it very far. It crashed near Japacha peak in the Cuyamaca Mountains. Despite the largest military search effort ever (up to that time), the wreck site was not found.  Six months later a local rancher discovered the wreck while rounding up stray cattle. The next year a very small memorial that included the plane engine, was built on the crash site. The airplane was left there for almost 40 years before most of it was removed.

The elevation of the mountain side memorial is 4,800 feet. The trail was steep and it was very hot that day. We made a couple of discoveries on the way up that helped keep us going. 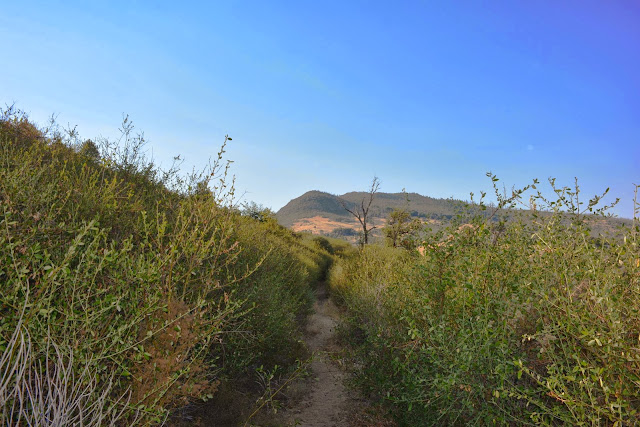 Just a bit overgrown in places. Long pants and sleeves will help you avoid a lot of scratches. Of course we didn't have on either. 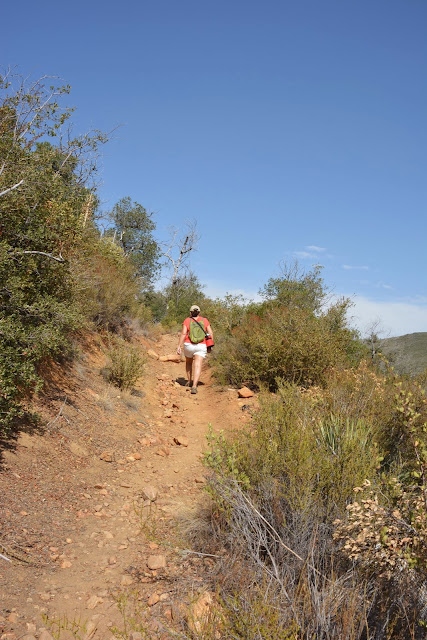 My wife leading the way uphill 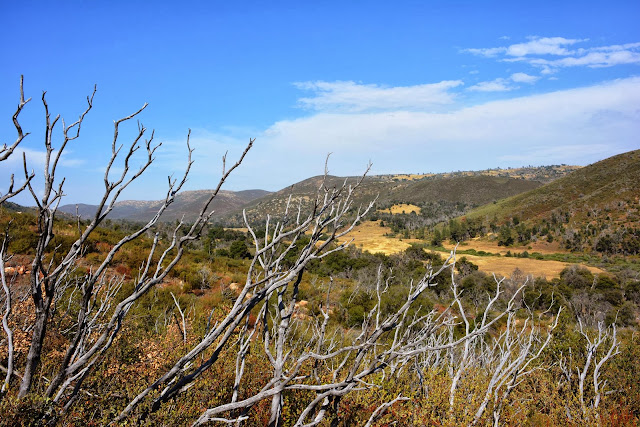 A bit of scenery from the hike 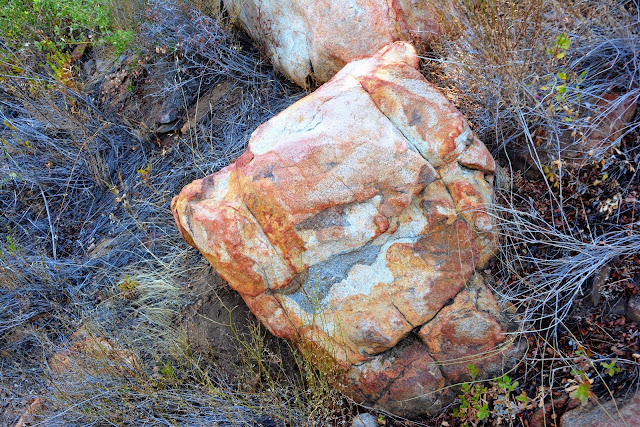 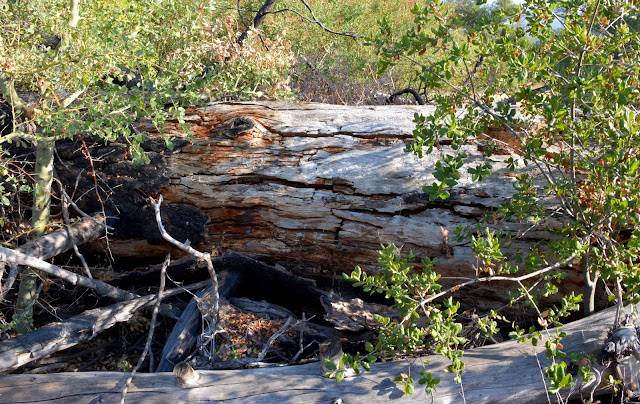 A huge remnant of the massive Cedar fire that devastate a large portion of San Diego County and burnt almost 100% of Cuyamaca Rancho State Park. The Cedar fire was the largest fire in modern California history.  Prior to that fire (2003) this was a fairly heavily forested area. You can tell by the photos, that it is that it is recovering, but is nowhere near the way it was. 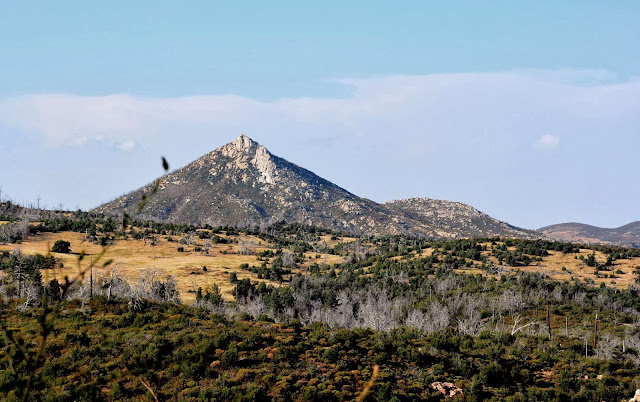 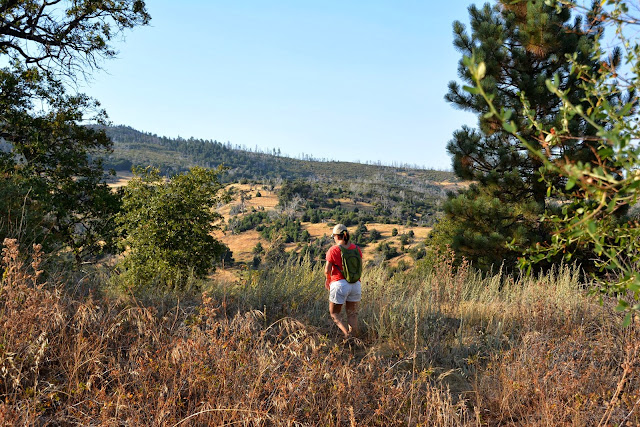 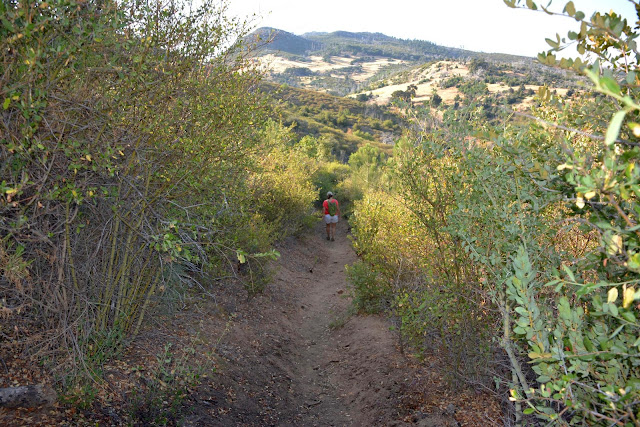 Long ways to go and happy for the shade 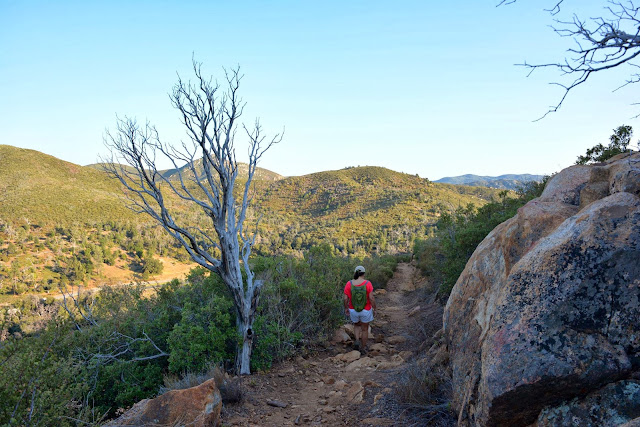 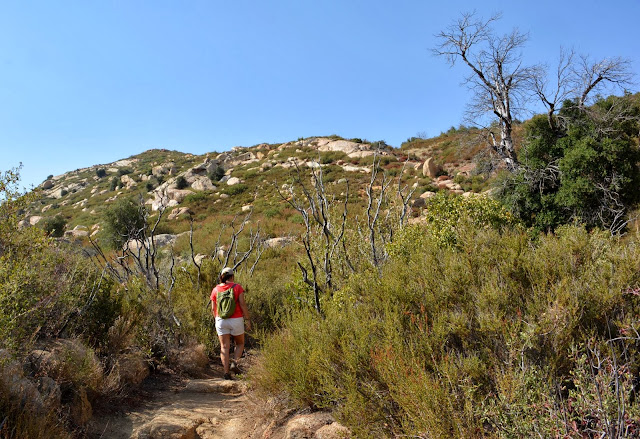 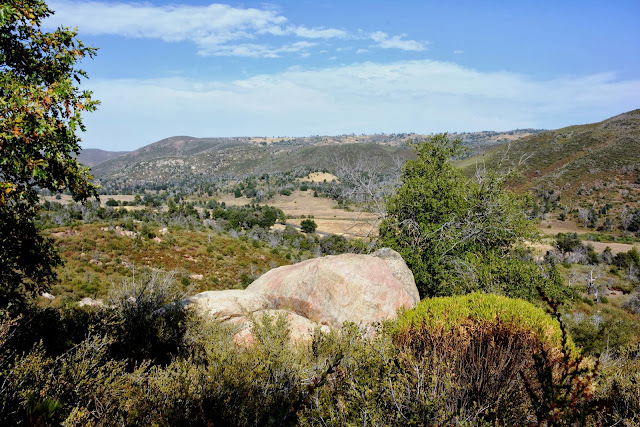 Not near the top, but I like the view 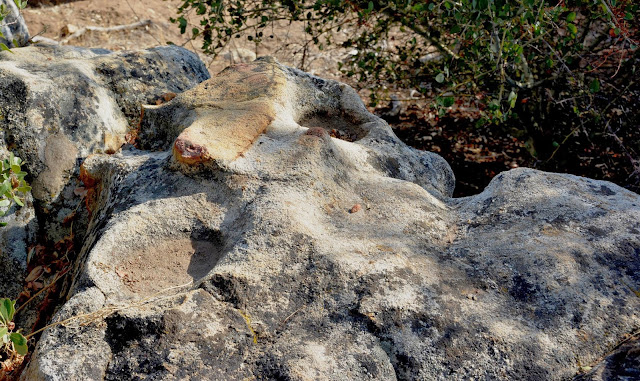 I saw a bit of light shining through the brush and powered my way though to see what it was. What it was (and is) is a couple of morteros. For those who don't know, a mortero or "mortar" was created and used by the local Indians to grind acorns or grain into flour.  It takes many years to make them this deep. The local Kumeyaa Indians spent summers in these mountains and winters in the desert lowlands. This went on for centuries. 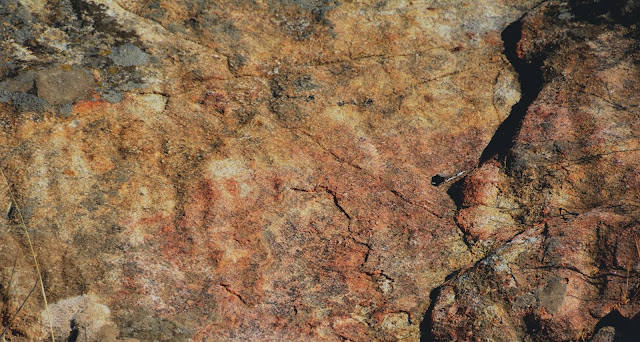 Multiple and deep morteros means they were probably used for a very long period of time. So, there are probably other indications of their presence in the area. It could be rock art, artifacts, etc. I'm not sure if this rock has anything on it, but it kind of looks like it to me. There is software that enhances those things and I really need to get it. 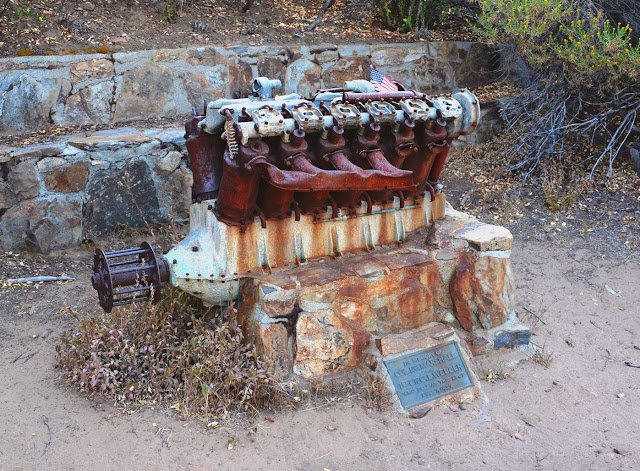 Finally, we got to the memorial. It's pretty much just the engine and a little plaque. There are also a few parts laying around. There are bees living in the engine. 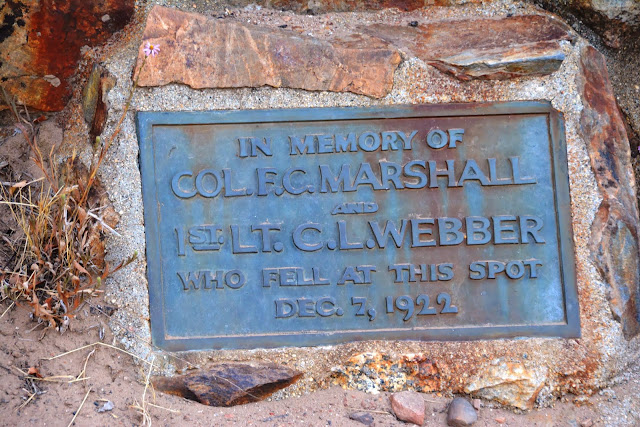 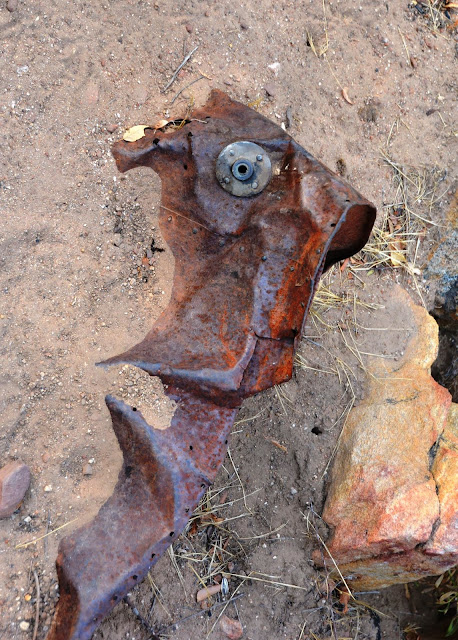 Some other parts of the plane are just sitting there. I'm SO VERY happy that  people are finally starting to leave things as they find them. That way others can also enjoy!  Thank goodness ATV's and Quad-Runners couldn't make it up the trail.  I do think that some people on those things are responsible for most of the damage, graffiti, vandalism and theft in historic natural places. That's right, I went there! 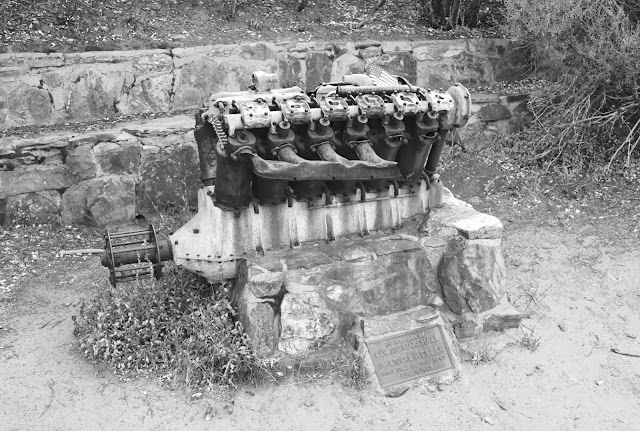 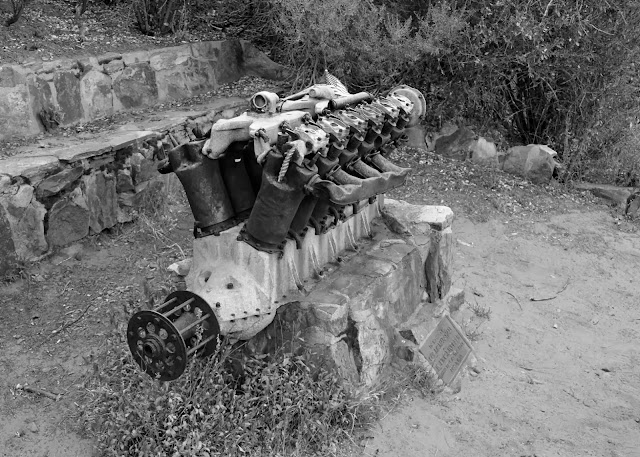 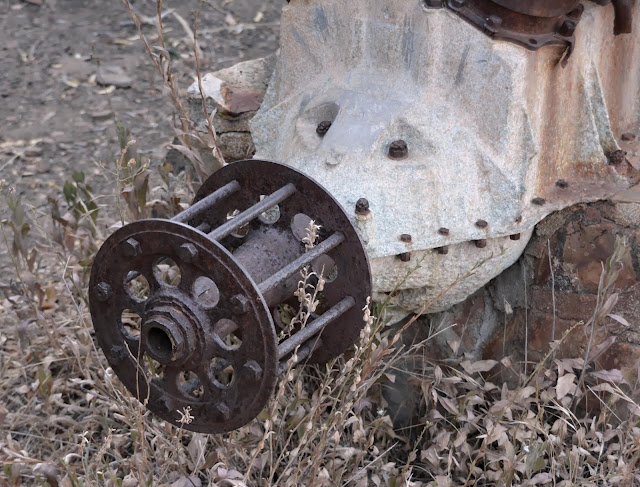 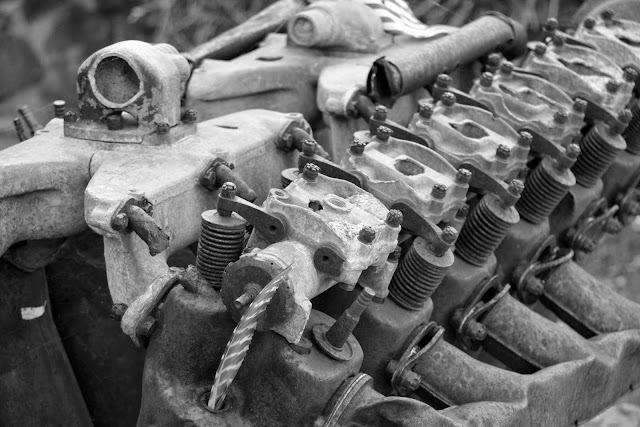 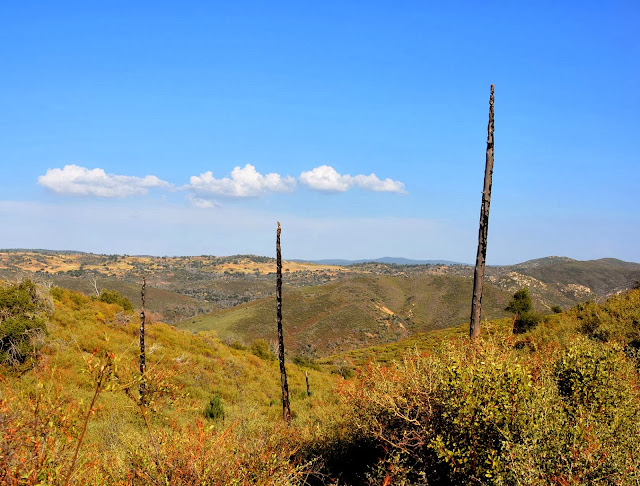