Within the Hidden Valley area of Joshua Tree is a place called the "Real" Hidden Valley. Somewhere around 1880, a man named Charlie Button had just been released from prison after serving 15-years relating to a double murder conviction. While in the Joshua Tree area, Charlie and his brother Willie discovered a small passage into a large rock formation.  Much to their surprise, the passage led to a "hidden" valley that was totally surrounded by the formation.

Shortly after the discovery, the Button brothers joined up with a local outlaw named Bill McHaney to rustle cattle in Arizona and use the "hidden valley" to hide and re-brand them. The cattle were then sold to ranchers on the coast.  Several years later, both of them were killed in a barroom brawl. (truth or fiction? I have no idea).


The next six photos were taken in the Hidden Valley area. 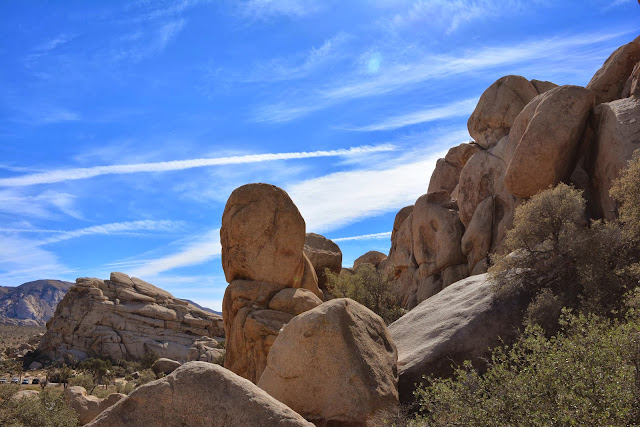 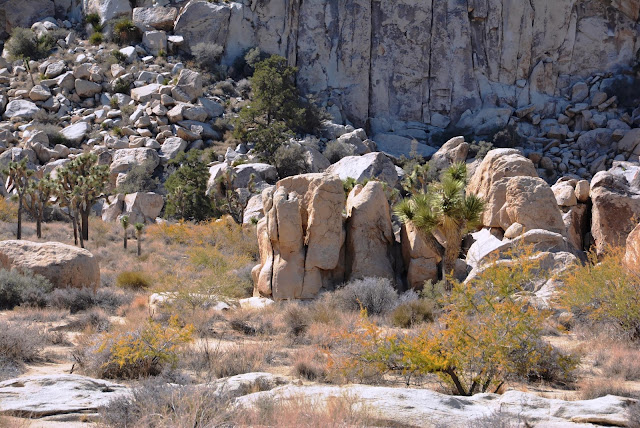 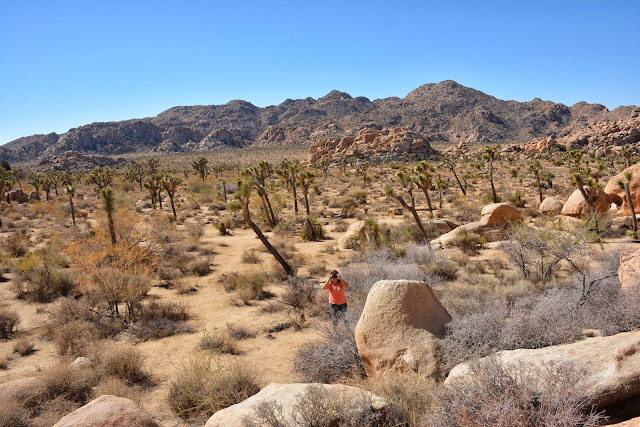 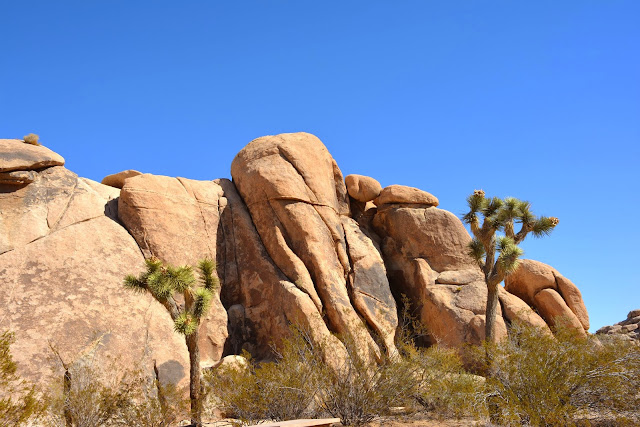 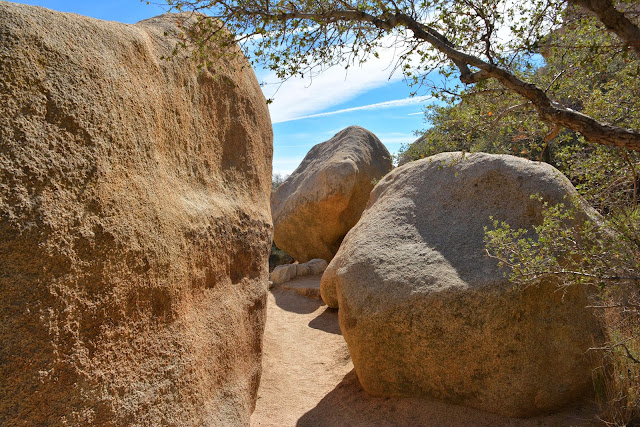 The opening into the real Hidden Valley (looking back out). You can see the damage done to these two boulders by the explosives. This spot marks the start of a one mile loop nature trail. How long it takes you to walk it all depends on how much you look around. It's not much exercise, but it sure gives you a huge dose of beautiful rocks. If you have limited time in the park, it's a must see. 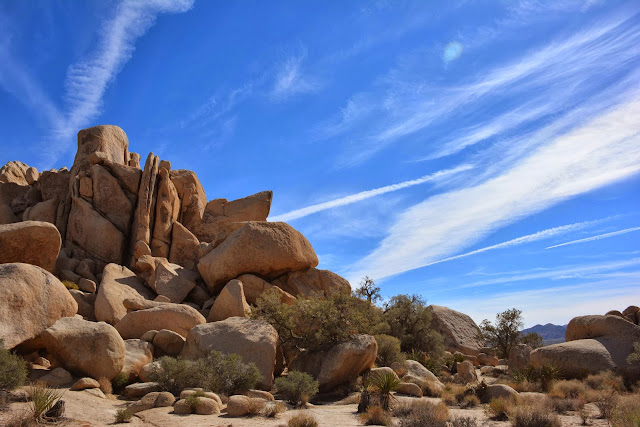 This photo and the rest were taken within the "real" Hidden Valley. 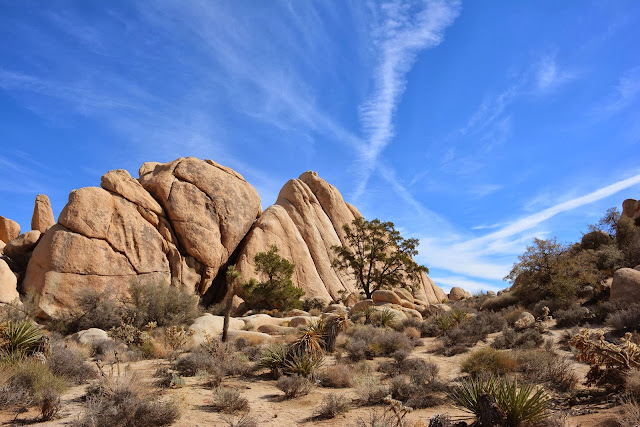 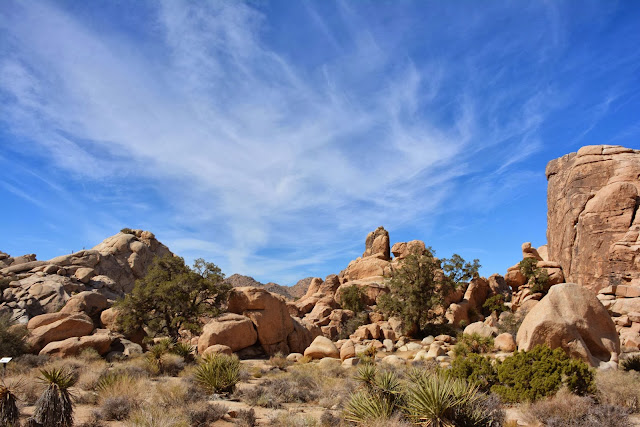 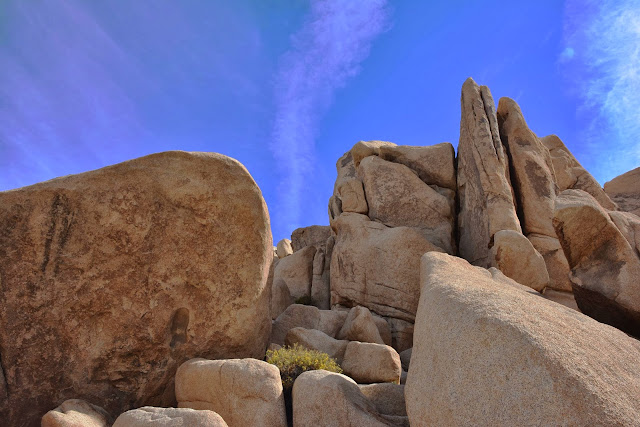 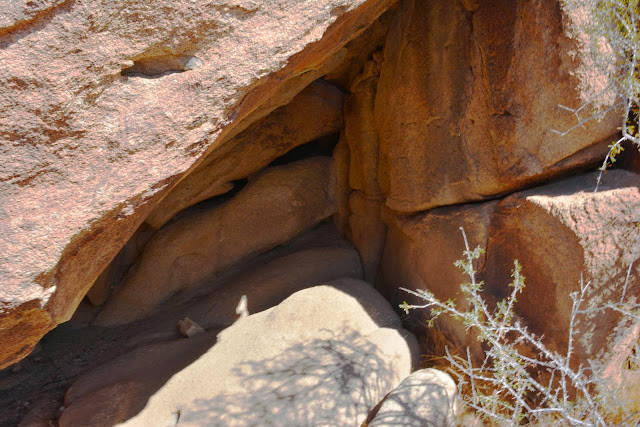 The valley may have been hidden to late comers, but this rock shelter and mortero (mortar) indicate that local Indian tribes used it. You won't find many things like this in the tourist guides, but if you keep your eyes open and explore a bit, they are there. 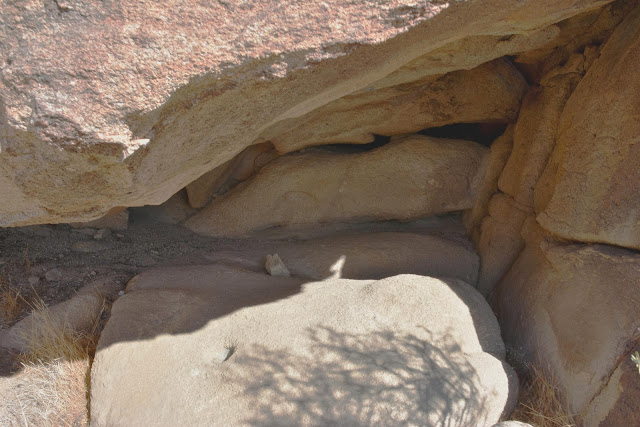 You can see it better in this one. The shallow mortero (or mortar) is used to grind acorns, seeds, plants, etc. There might have been some faint petroglyphs there also, but not obvious enough to post a closeup. 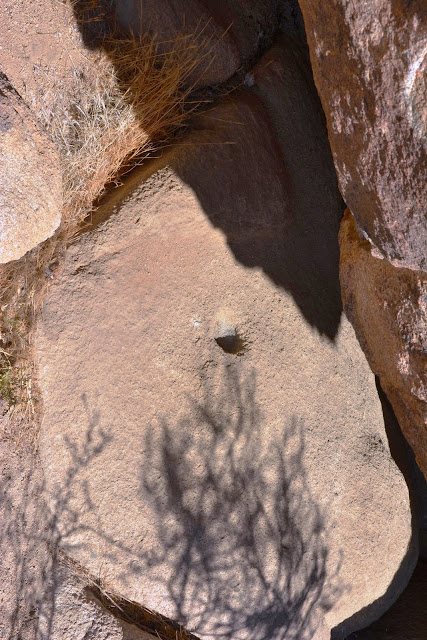 Here is another one. This one is much deeper and indicates that it was used for a much longer period of time. The Indians in this part of the country were primarily "hunter gatherers" and moved with the seasons and food sources. They would usually only be in desert areas like this during the cooler months. 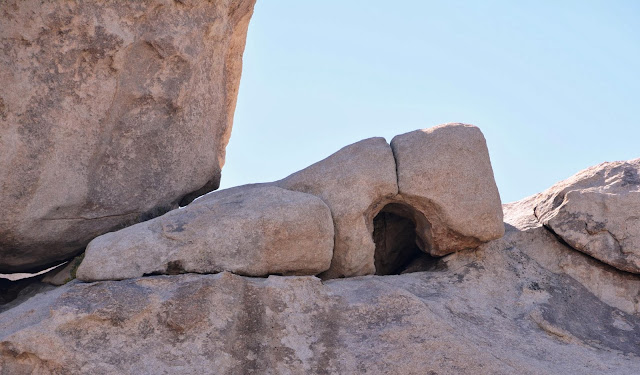 Next time, I will climb up to that cave! From afar, it looks like it isn't totally natural. 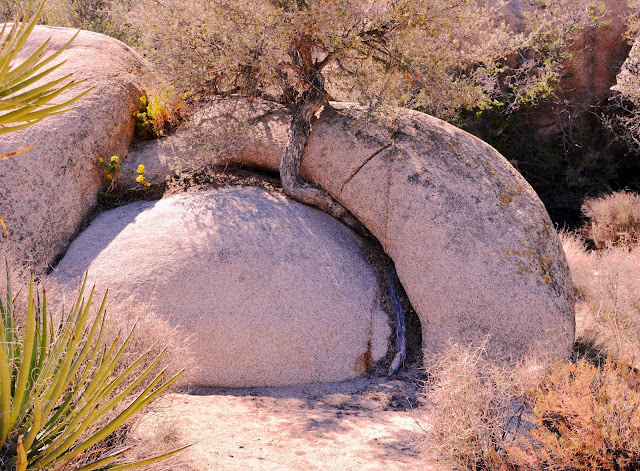 Which is stronger, the rock or the tree? 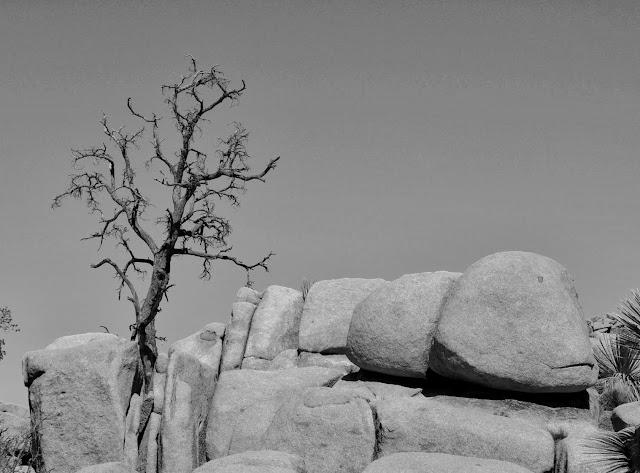 I have to post at least one black and white.
Doesn't the round boulder to the right look like it has a mouth and eyes? 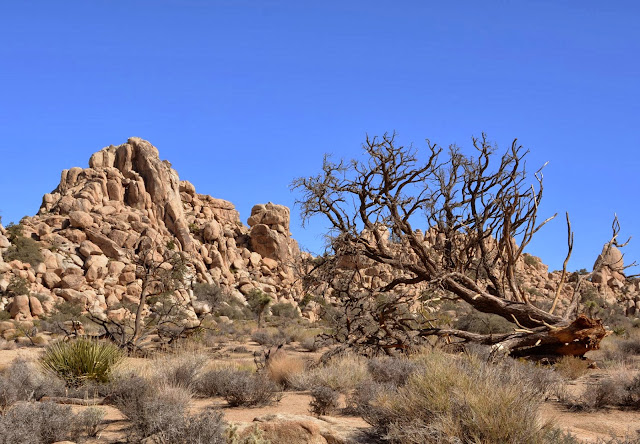 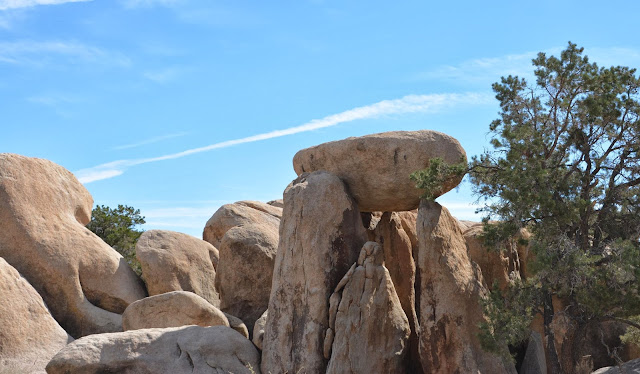 The rocks in the middle looks kind of like a ring setting with a "rock" in it.  The rock to the far left looks like a giant bird head, or maybe a primate head of some sort. Or maybe it's the peyote... 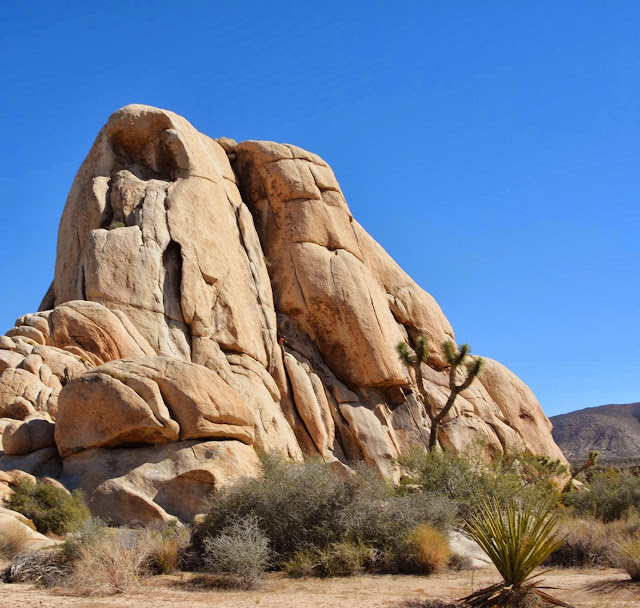 Look at the little reddish spot around the middle of this rock formation. 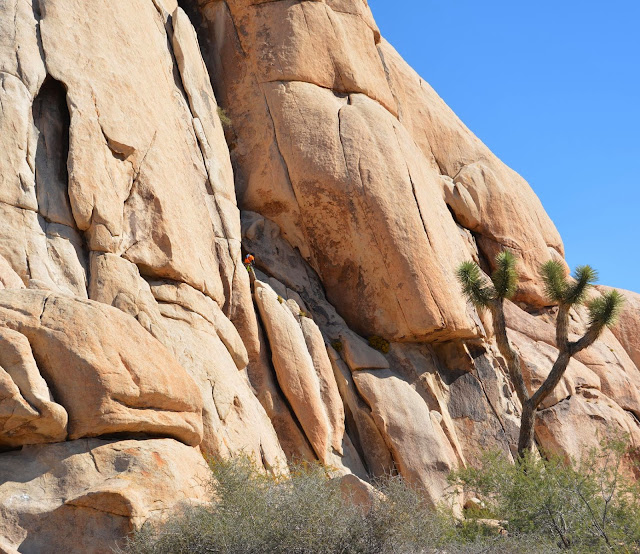 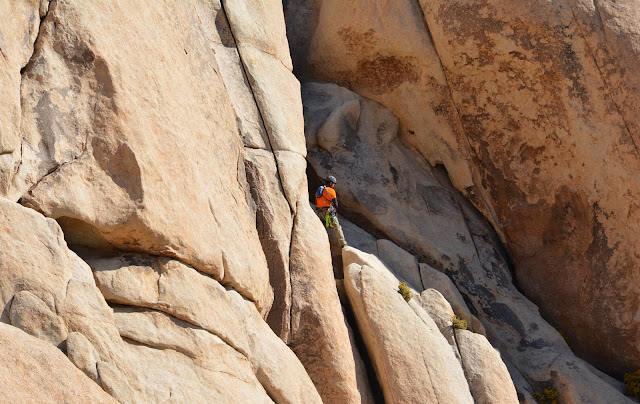 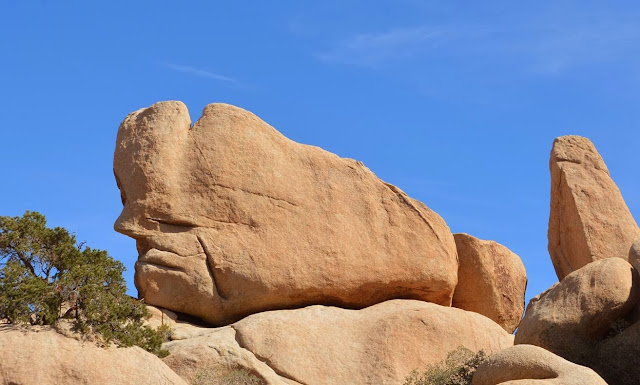 They call this thing "Trojan Rock" because it supposedly looks like the USC Trojan mascot.