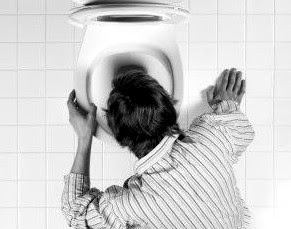 My dad kept his tube of hair cream and comb in a drawer next to the bathroom sink. His tooth brush and tooth paste were in the medicine cabinet over the sink. He was out late most nights and was usually pretty bleary eyed when he got up in the morning.

One Saturday morning, my brother and I swapped the two tubes, hoping that he wouldn’t notice until it was too late. We sat in the living room waiting for him to get up and go to the bathroom for a long time.

After what seemed like hours, we heard him come out of his room and go into the bathroom. The first noise we heard was the toilet flushing, the second was the bathroom faucet running, the third noise sounded like some kind of wild animal.

Apparently fate selected the “brush your teeth with hair cream” scenario over “comb your hair with toothpaste,” because the "wild animal" noises turned into some very loud retching. Then the sound of my dad throwing up!

After a few minutes he came out of the bathroom with one tube in each hand. We sat quietly on the couch watching TV, like we didn’t know (or hear) a thing while he stomped into the kitchen and asked my mom about it. She claimed to know nothing and told him that he must have put them away in the wrong places the day before. When he walked by us on his way back to the bathroom, he paused for just a second and stared at us.

We must have looked innocent, because he didn’t say a word.  I think he knew on some level that we did it, but he never asked.