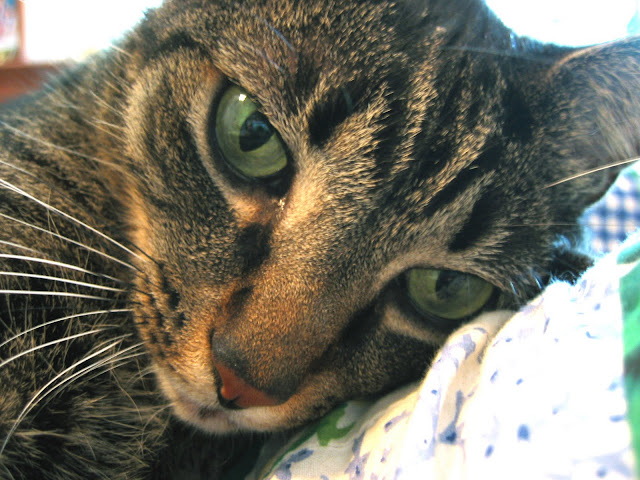 First off, I apologize to all of you whom I thought to be crazy. I just didn’t understand why you would spend so much money to keep your pets alive. I also couldn’t understand why you became so involved with them on an emotional level. In the world of my childhood, it was very unwise to be emotionally attached to anything, or anyone. That most definitely included animals.

Today I received my comeuppance, in spades…

We’ve had Batman for about 12 years. One of the girls found him as a kitten, wandering around a grocery store parking lot. Of course she brought him home. I was pissed at first, because I’m allergic. The wild little shit grew on me. So much so, that I got allergy shots for two years. He is the reason that I now know how pet owners feel and why they do what they do.

Batman grew up to be a huge tomcat. He never acted like one though. More evenings than not, he could be found on my lap. Most nights he could be found sleeping with his head on one of our pillows. If he was awake, he was probably purring. Even if he wasn’t actually on us, he’d always reach out with a paw and rest it on us. “Just to be sure of us” (like Piglet to Pooh).

In early 2007 we noticed a bump on Batman’s left hip. The bump was a malignant tumor. It was operable, but not curable. The oncologist who performed the surgery on him came very close to amputating his leg. The surgery was touch and go, but she was able to save it. Things went well for about four months, but a subsequent follow up exam revealed that he had more tumors in another spot on the same hip. This time the surgeon was very concerned that the leg would have to come off. We were very upset about it. She told us not to worry because a cat’s rear legs are so overpowered, that they can easily get by with only one of them. She added “the cat will get over it in two weeks, we would get over it in two months, and our friends would take a year.” A little medical humor I guess. It made us feel better though. He managed to keep his leg both times, but gained two hellacious scars

Two years after his second surgery Batman was declared to be in remission. We were very happy because the type of cancer he had was not curable. Everything has been great. Batman was back to his normal self and we’d almost forgotten about the cancer.

Several months ago we noticed that Batman was losing weight. We had another cat that had recently lost weight with some stomach problems, so we didn’t pay it much mind for a while. The weight kept coming off though, so we took him to our regular vet. She thought she felt something in his abdomen and took an x-ray. The results were not good. He had a large tumor in his abdomen and six small tumors in his lungs. Of course we had a thousand questions. None of the answers were good. She told us she would put him down that day, if that’s what we wanted. We were floored. My wife said we wanted to take him to his oncologist before we made any decisions.

His oncologist looked at the x-rays and told us there was nothing she could do. The tumor in his abdomen would eventually make it impossible for him to eat and poop and the tumors in his lungs were going to make it hard for him to breathe. We asked her what we should do. She said to take him home and enjoy whatever time we had left with him. We asked her how long that would be. She said she had no idea, but Batman would let us know when it was time. When he stopped eating, pooping, or grooming, we’d know it was time. She also said we’d know when he started having pain.

We got two extra months with him, they were good months. He continued to lose a lot of his weight and only started having troubles eating and evacuating very recently. We made an appointment for today to make sure he didn’t suffer.

The process went quickly and painlessly. I held him when the vet put him under and when she stopped his heart. Then the strangest thing happened. His body seemed to relax and he no longer looked so skinny. He looked like he did a year ago. He looked healthy. He was gone, but he looked healthy. His eyes were open and when I was petting him I thought he might respond. Of course he didn’t. When I looked up at Dr. Wood, she was crying also. They knew Batman and what he’d been though over the past several years.

Batman purred right up until the time that he was gone. I would have expected nothing else from him. 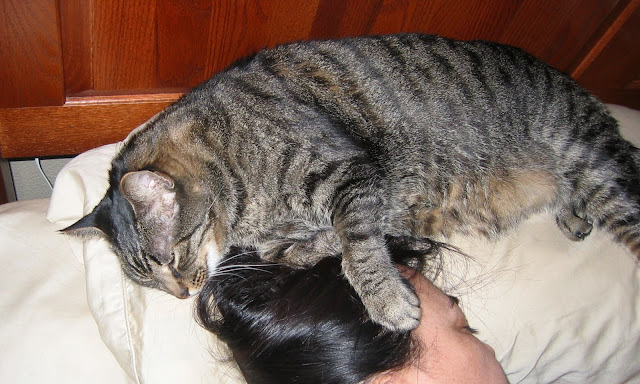 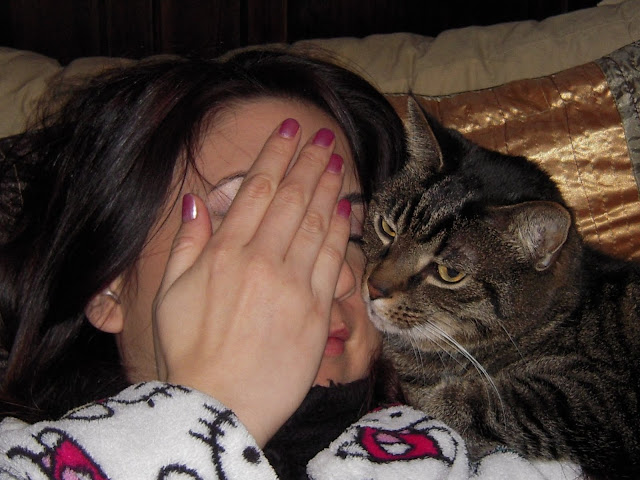