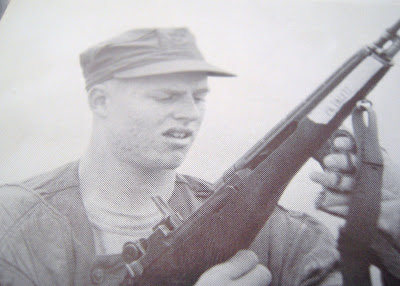 Photo taken on qualification day. I was kind of a brute in those days 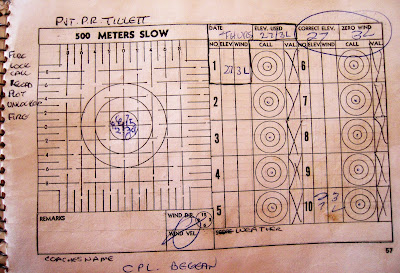 In addition to all the other skills you are expected to master in boot camp, you must also be able to fire a rifle accurately at a target from several different distances, and from several different positions. In my day, the combat rifle issued to Marines was the M-14. Although it was a bit heavy, it was very rugged and dependable. In the hands of the right person it was extremely accurate up to distances of 500 meters and more.

There were no range facilities in San Diego so we had to travel from MCRD to Camp Pendleton, the sprawling Marine Corps base near Oceanside, California. Our first few days were spent learning about the rifle range, our rifles, and how to shoot with accuracy. The “dry firing” method of training was eventually replaced by live firing. Each day at the range how we shot was charted into a range book. We practiced on Monday thru Wednesday, had pre-qualification on Thursday, and Qualification day was on Friday.


All Marines were expected to qualify with the M-14. There were three levels of qualification. Expert, Sharpshooter, and Marksman. You couldn’t graduate from boot camp until you qualified at one of those three levels.

Having my own rifle for most of my life gave me a advantage over a lot of the recruits in my platoon. Although I’d never live fired an M-14, I did know how to relax enough to make accurate shots. Actually, I shot a bit too well. On Thursday, I shot extremely well. Best of all, I shot a perfect 10 for 10, all in the bulls-eye from 500 meters. One of the pictures above is from my range book. Each of the ten shots is individually announced and charted as you shoot them. When the range coach saw my score he made them check off my individual shots on the target again. It checked out and everybody was excited, including me.

After we got back to our temporary barracks that night even Valdez seemed happy about it!  As he reported my success of earlier in the day to the rest of the platoon they were also excited because it is very rare for anybody, recruit or otherwise, to shoot a perfect score from 500 meters. If it had been Friday instead of Thursday, I’d have easily surpassed the Expert threshold.

After Taps sounded and it was time for lights out the fire watch came to my bunk and said the DI’s wanted to see me in the duty hut. He also told me that when I got there I was not to pound on the door, but just walk in. As I approached the door Valdez motioned me inside.

“Remain at attention and don't say a word until I tell you to Tillett.”

I stood as silent and still as Lot's wife, while wondering what was about to happen to me. Every other time I was alone in the duty hut, bad things happened.

“Tillett you did a great job out there today. You had the highest pre-qual score that any of us has ever seen by a recruit, and we assume you will do equally well tomorrow. You should have no trouble qualifying as expert” “Are you nervous about tomorrow?”
“No sir!” I replied, shocked that Valdez would compliment me about anything.
“That’s good, because we may ask you to do some work for the platoon tomorrow” he said while looking at me with a raised eyebrow. “Do you know how close the competition is for honor platoon Tillett?”
“No sir” I answered.
“It is extremely close, how we do tomorrow at the range and on our final drill will decide which platoon wins” he explained. “You know that we want to win very badly don’t you Tillett?”
“Yes Sir” I answered while thinking of the beatings he gave when he caught some guys not studying when they were supposed to be. Oh yeah, I know how bad he wants it.
“It seems that you are the platoon’s best shot Tillett, and we may need you to qualify a few others besides yourself.”
“Sir?”
“Tillett, I’m only going to say this once, and then you are going to forget that I ever told you, do you understand me?” he said in a serious tone.
“Yes Sir.”
“You are going to shoot the 500 meter segment for at least 2 other recruits tomorrow” he said in low voice. “I’ll already have the their names printed on tape. When we need you we’ll change the tape on the back of your jacket and on your weapon You better remember who you are supposed to be, if one of the range personnel calls you by the other guy’s name, based on what the tape on your back says.” “Do you understand Tillett?”
“Yes Sir.”
“Tillett two more things, you had better not shoot a perfect score for any of those sorry sacks of shit, because it would look suspicious, and you better not cause them not to qualify!” he threatened.
“Yes Sir” I replied.
“Are we clear Tillett?”
“Yes sir!”
"One more thing Tillett, if this all works out and you do what is needed tomorrow, we will recommend you for sniper school."
"Yes Sir!"
"You would like to go to sniper school wouldn't you?"
"Yes Sir!"
“Good, now get the hell out of my sight!”

I didn’t know how to feel about what had just happened. I was complimented by some of what he said, and I was proud of what I’d done that day at the range. But now that sick bastard wanted to me to help him? He had some nerve. He had to know how I felt about him. I sure knew how he felt about me. Should I do the best I could? Should I do badly on purpose to screw Valdez over? Should I refuse to shoot for anybody else but myself?  There was also the issue of sniper school.  Would I really like it?  Could I really live with killing people that couldn't even see me? I guess it was better than having them shooting at me also, but still.  How would I feel about it after the war?

I lay there going back and forth in my mind for a very long time. I think I’d just fallen asleep when a DI came in to the room and started yelling for us to get out of our bunks and be on the platoon road within fifteen minutes. After we finished morning chow, trucks came to take us to the range. I still didn’t know what I was going to do until we got there. I decided that I’d do what Valdez asked of me. I’m sure he wasn’t the only one involved in this. The platoon commander and other DI’s must have known also. Surely they would all be at the range that day.

I shot most of my segments without them asking me to do anything. One thing happened that I didn’t expect though. I was nervous! I hadn’t been nervous at all the day before, but for some reason I didn’t feel as confident. Maybe it was from lack of sleep, or maybe it was because of what they were going to ask me to do.  I had just finished one of my segments when Valdez told me I was needed at 300 meters. I had to shoot for two different recruits there. My first two shots weren’t even close to the bulls eye. I forced myself to relax and made up for the bad shots with several good ones. Apparently there were more people struggling than they anticipated, because as the morning wore on, my name changed so many times that I thought someone was going to become suspicious of the ripping noise the tape made as they changed it.

I was finally at the 500 yard prone segment and before I got to shoot for myself, I had to shoot for two other recruits. Each time Valdez leaned down and told me exactly what score was needed.  At this time a lot of the guys were done shooting and they all knew what was going on.  I felt the pressure of them knowing. As earlier, the first couple of shots were terrible and I had to do some good shooting at the end to get the scores Valdez demanded of me. It was a struggle, but I finally got the last guy qualified.

Finally, it was time for me to finish up my own day with the 500 meters segment. I was exhausted and drenched with sweat. Valdez told me that I had to get a particular score for us to win the rifle range portion of the platoon competition. It meant that I’d need almost all bulls eyes for us to win. I couldn’t relax and I didn’t get it done. We ended up tied with another platoon for the rifle range competition. I didn’t get my expert badge, but I did ensure that everyone in our platoon qualified. Valdez was pissed at me, but didn’t say too much, because without me we’d probably have finished in last place instead of tied for first.

When it was all said and done, I realized that I had been used in a major way. They really didn’t give a crap about me. If I had been caught, I’m positive the DI’s would have said they didn’t know anything about it.  Me and the guy I was shooting for at that time would have gone to the brig and probably received dishonorable discharges for cheating.

If I hadn’t done so much high pressure shooting for other recruits and only had to worry about myself, I’m pretty sure I would have qualified as an expert. To this day I wish I would have refused to do what Valdez told me to do, or made sure that I got lower scores than he demanded.  Or maybe even put one of those shots right through his forehead.

Chalk up a major win for Valdez…