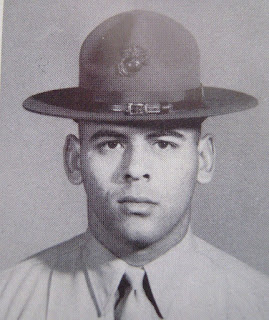 I didn’t know whether to shit or go blind. If there ever was a case of being in the wrong place at the wrong time, it was there and then. I knew I was going to catch hell for being a pick up anyway, but with Valdez involved and the fact that he’d now have the opportunity to pick up where he left off earlier, scared the hell out of me.

Valdez opened up one of the full length DI lockers and told me set my sea bag (duffel bag) down on the floor. He then told me to get into the locker. I did, and he shut the door and locked it. I could see the floor in front of the locker through the air vents. I could see his boots, he was just standing there. Then he disappeared.

About 10 seconds later something (or somebody) slammed into the locker and it toppled over, crashing to the floor. It hit the floor so hard, I was surprised I wasn’t hurt badly or knocked out. Then he started hitting the locker with something, or kicking it. I thought it was a baseball bat or a hammer. What ever it was, it was loud and every blow hurt my ears. The pounding stopped as quickly as it had started, then I heard another voice in the room.

“What’s all the noise and where’s the recruit I sent in here a few minutes ago?”
Valdez laughed and said “I haven’t seen anybody!”
“Is he in that locker?” the other DI asked.
Valdez laughed again and said “You’re fucking A right he’s in the locker!”

Next thing I know, they are both kicking and hitting the locker with something. It was incredibly hot in there and I was soaked. At some point another DI came into the office and he started in on the locker as well. One of the DI’s asked when the PC (platoon commander) was coming. Another answered that he would be back from leave the following day. It made me think that maybe the PC wasn’t the type to put up with this type of recruit treatment.

About that time the locker started moving. I realized that it had been picked up off the floor. I thought they were going to set it upright, but they didn’t. They threw it! All I could do was brace myself.  The impact of it hitting the floor hurt just about every part of my body. Eventually they must have tired of the game and set the locker on end. Only one problem, they set it on the wrong end.

Valdez is taunting me…he said he’s not ever going to let me out. He said I was going to die in that locker. I was lying in a cramped upside down heap for about 5 minutes. It sounded like they all left the room and by the screams I heard outside, it sounded like they must have forgotten about their new platoon for few minutes and were now making up for lost time.

After a while two of the drill instructors came back into the room and knocked the locker over again. This time instead of beating on it, they unlocked the door and opened it. The both peered down at me laughing. Valdez said “look what I found!“ and said I looked like I was in a coffin. He also added that he wasn’t going to let me die in that locker, he had too many plans for me to let that happen.

One of the other DI’s told me to get out of the locker, pick up my gear, go to the head, clean up, and then report to the Quonset hut where my new squad was. I went to where I had dropped my sea bag and saw that it was empty. Valdez started screaming at me, “what the fuck is the delay?, he just gave you an order! Get your gear and get the fuck out of here!”

“Sir, the private’s gear isn’t in his sea bag, sir!”
“Scumbag, your gear is right over there, and there, and over there, and back there, and some of it is in the platoon road! He screamed…. “Now get your sorry ass out of here!”
“Yes sir” I yelled. I gathered up my stuff and ran to the head to clean up.

I was shocked when I saw myself in the mirror. My face and hands were covered with blood and sweat. I had cuts and scrapes on any skin that had been exposed and I knew that I was going to have bruises all over my body. At that moment I felt lost. Not only did I have to start boot camp all over again, I had to do it with Sgt Valdez. He would do everything in his power to see that I either ended up injured, AWOL, or in the brig.

I was just about to leave the head and run to my hut when one of the other DI’s stuck his head in the door. He told me that I’d better “un-starch” my cover and utilities, because if Valdez saw me in them again he might really bury me in that locker. He said I already had three strikes against me. I new exactly what he meant; I was a pickup, I was wearing starched utilities, and Valdez already hated me.

At last a break. I don’t know why he gave me that heads up, but I totally appreciated it, and I wouldn’t forget it. I wrinkled the heck out of all my clothes and stuffed them back into my sea bag. I thought maybe it wouldn’t be too bad. The DI who gave me the head’s up seemed okay, and if the platoon commander was anything like the one from my first platoon, maybe Valdez wouldn’t have too many chances to get me. At least now I had some hope.