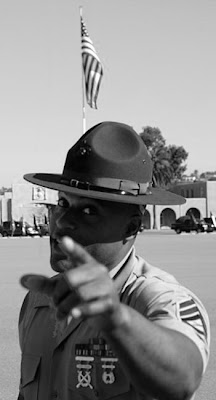 The morning of day 2 started with a bang.  A drill instructor burst into the room, turned the lights on, and threw a metal trash can across the concrete floor that crashed into the far wall.

He was screaming at the top of his lungs that we had five minutes to get our racks made up, and get our asses in formation on the platoon road. I had no idea what time it was, only that it was still very dark outside. A couple of guys were yanked out of their racks to the floor. Most of us were in formation on the road within the time allotted.

The guy who was supposed to be standing next to me was not in his spot. He finally came out of the hut, walked up behind one of the drill instructors, tapped him on the shoulder, and said to the DI, “I can’t find my other shoe!” I swear he said it just like that. We’d already been told numerous times that we were never to speak to a drill instructor without permission. And we were expressly forbidden from ever touching one. It was supposed to go like this…

The DI will either give you permission to speak, or not be able to hear you (even though you are shouting the request). If he does miraculously only make you ask once. You then say…

But no, this idiot just walks up to the DI, taps him on the shoulder like he knows him, and says something to him like he’s on the street somewhere talking to a friend! The drill instructor turned around with a complete look of astonishment on his face and said to the guy, “what did you just say to me numb nuts?” The poor stupid bastard repeated exactly what he said the first time! The DI looked at us, looked at the other drill instructor who was close by and started screaming at the guy like he was totally insane. The other DI came over and joined in. The guy had 2 DI’s on him at the same time, he just stood there and took it. Well, he took it for a minute anyway. Then his eyes welled up with tears!

This really set the DI’s off and they got louder and more abusive. Then the first DI grabbed the guy by the throat and pulled him into the closest Quonset hut. He pushed the guy onto the floor and drug him by his collar across the room. When he got to the middle of the room he stopped. He then started hitting the guys head against the side of the metal heater! Some of us could see it clearly through the open door. I don’t know how many times he did it, but it was several. The guy was lucky that his head was hitting the middle of the heater where the metal had some give. The DI’s then walked out of the room, shut the door, and one of them marched us off to our morning head call.

When we got back the guy with one shoe was gone! We never saw him again. Rumor had it that the DI’s said the recruit hit one of them, and he was currently in the brig. If that was true, I don’t know how they explained the damage done to the recruit, but they stayed with our platoon, so they apparently got away with it…