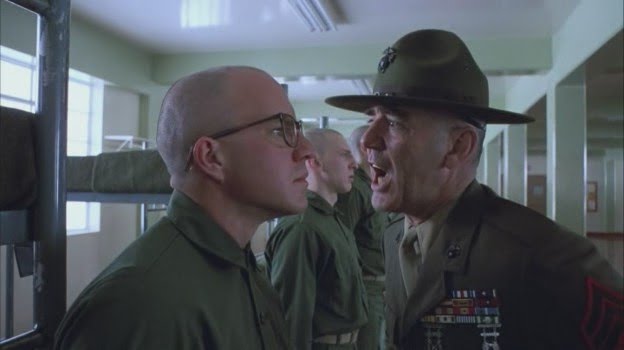 We heard them screaming before we actually saw them.

We couldn't tell where their voices were coming from, because it was all echoes. Then we saw them running directly at us from around the corner of a building. There were three drill instructors, and the closer they got the crazier they seemed.

Walking slowly behind them was another one, while still obviously a drill instructor, looked to be a bit older and maybe in charge. He wasn't screaming and didn't say a word. He also wore a shiny leather belt instead of the standard web variety worn by the other drill instructors.

The three younger DI’s really knew how to work a crowd. They went up and down the ranks screaming at everyone randomly. Sometimes stopping to make individuals do push-ups for one offense or another. Everybody was guilty because none of us knew the rules yet. I took my share of screaming and I did my share of push-ups. I knew they were doing it so we’d know who was in charge from the get go. But knowing it didn’t make it any easier, but it made me feel better. And boy did they ever want us to know who was in charge!

It didn’t take us long to learn the DI’s moves. The one that seemed to be their favorite, was to knock the wind out of you with a quick punch to the stomach. The second was to grab you by the throat. Not actually your throat, but your windpipe! They would dig in with their fingers on one side and thumb on the other and try to touch them together in the middle of your neck. At least that’s how it felt. While doing so, they usually asked you questions and of course your answers were never loud enough (how could they be?). They would make you answer over and over again. “I can’t hear you!”

While all this was going on the older drill instructor just stood in the background and watched. We were eventually marched to our barracks in another part of the base. When I say we “marched,” I use the term loosely. We did nothing close to what could possibly be considered marching. It seemed like a lot of guys didn’t know their left foot from their right. This led to a lot of feet getting stomped on, to “educate” some recruits about which foot was which. As we “marched” one DI barked out the cadence and instructions while the other two continued weaving in and out of the formation screaming at us. The older guy just walked along with us but said or did nothing. I assumed he would be the good guy in the “good guy/bad guy” game that was sure to come.


We finally arrived at our platoon barracks and marched down the platoon “road.” Again, I use the term “barracks” loosely. What we actually stayed in were Quonset huts. These things had been there since World War II or earlier. Each squad was assigned to a hut. There was a big square heater in the middle of the room and there were just enough sets of bunk beds (racks in marine speak) for everyone to have a place to sleep. I think my squad had 16 recruits, so there were eight sets of racks. There were two foot lockers at the end of each set of bunks for us to stow our gear in. We were told we had about two minutes to do that and we had to be back on the platoon road in formation, by the end of that time. Of course there were guys too confused to get it done in time and after some not so gentle coaxing by the DI’s, we were all finally in formation on the platoon road.

A little later in the day we were all told to go into one of the huts. Although it was crowded we all fit in there with not too much of a problem. One of the DI’s told us to sit on the floor. The older DI came into the room and introduced himself to us. He was the Senior Drill Instructor and Platoon Commander he said.

He was a ramrod straight tall black man, who was the most squared away looking person I’d ever seen. If I was to select a person to be on a national Marine Corps poster, he would be the guy. He didn’t yell at us, and he didn’t hit anybody. He just told us what we were to expect and that if we did what we were told it would all be over with before we knew it. Only then we’d be worthy of being called Marines. He turned and walked out of the room. The meaner looking of the younger DI’s came in and the shit hit the fan.

I was probably better equipped for boot camp than most in my platoon. Not only did I make sure I was in great shape, thanks to my mom I was already able to cope with crazy violent people. I also had a friend in the platoon. My best friend and I enlisted at the same time on the “buddy plan.” Supposedly if you do this, you are guaranteed to stay in the same unit for as long as possible.

Oh yeah, it really did help to be in good shape, but believe me the DI’s still find a way to make you suffer physically…