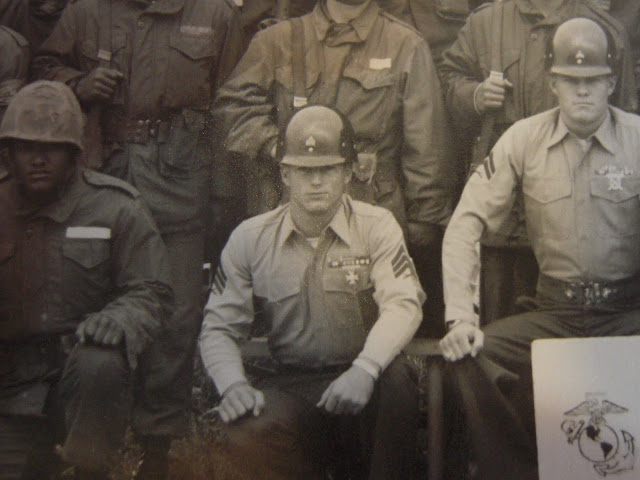 For the life of me I can’t remember if we got a short leave after boot camp or we had to go directly to infantry training. I “think” we went to infantry training. Either way we left MCRD with our once-worn dress uniforms and thinking we were bad ass Marines. That may seem like a negative, but that’s exactly what they wanted us to think.

Boot camp took place at the Marine Corps Recruit Depot in San Diego. Infantry training took place at Camp Pendleton about 30 miles or up the coast. I was assigned to Lima Company, 2nd Battalion, 2nd Infantry Training Regiment. In boot camp we trained as a platoon. In infantry training we trained as a company (4 platoons). I remember arriving at the barracks area (Quonset huts again!) and noticing that we were surrounded by hills. I just knew we’d be humping and running around those hills until we dropped. I was certainly proven to be right about that.

Because I had been promoted out of boot camp I was given the assignment of platoon leader (or something close to that). There was a troop handler who was really in charge, and they had us (the trainee “platoon leaders”) to do some of their grunt work. You could tell the troop handlers from everybody else because they wore brightly colored helmet liners most of the time. I think my Sergeant’s helmet was green metal flake. I know his name was Frank Bignami.

The troop handlers didn’t let us forget that we were fresh out of boot camp and didn‘t yet know squat. They weren’t as mean as drill instructors and didn’t expect us to act like recruits but they still made sure we knew our place.

If one of us called them Sir, they would let us know straight away that they weren’t officers, and to just to call them by their rank and name. The first time I spoke to Sgt. Bignami I called him Sir and he told me that he had too much integrity to be an officer. I thought that was a great and funny line, I never forgot it.

Sgt. Bignami could be pretty stern with us but he did a good job helping us make the transition from boot to marine. He was usually a pretty good guy (compared to Drill Instructors) and was fairly nice to us most of the time, but he did do one thing to me that I resented. I’ll get to that later.

The best things about ITR were the weapons. If there was a weapon we each didn’t get to personally use in ITR, I can’t remember what it was. We shot bazookas, LAW rockets, grenade launchers, machine guns, rifles, and pistols. We got to throw grenades and set up claymore mines. We got to shoot at rifle ranges, live fire simulated patrols, and at night. We pretty much shot the place up. That part was an absolute blast.

We also did a whole lot of humping around Camp Pendleton.

Camp Pendleton is a huge place, and very hilly. When the company is moving from one place to another we generally marched there. When we got off the paved roads and into the hills the instructors would give us the command to “route step.” In a nutshell that means even though you pretty much stay in your company formation while marching, you no longer had to stay in step. This got to be very interesting when doing it in the hills. If you were the first platoon you just walked up a hill and down the other side. But if you weren’t with the first group to go over the hill you tended to bunch up at the bottom of the hill because the people in front of you slowed down as they climbed. By the time you got to the top of the hill you had to literally run like hell to catch up with the formation because the people in front of you were speeding down the back side of the hill while you were still waiting to climb the front side of it. It was hard work being anywhere in the formation but the front of the first platoon. The further back you were, the harder it was. It was hard enough when the weather was good, but when it was bad, and the trail or dirt road was muddy, it was incredibly hard. As luck would have it (bad luck that is), my time in ITR coincided with a very rainy period. Well, rainy by southern California standards that is. We were slipping and sliding all over Camp Pendleton.

The things I liked best about ITR were the weapons training and that I lived close enough to my home town to make it there fairly often. Don’t get me wrong, there was also misery to be had in ITR as well. The star of that show was a bump on the map called “Old Smokey.” Old Smokey was very steep hill. It was hard to climb anytime, but with full gear on it was extremely hard. With full gear on and when it was muddy it was hell and almost impossible. Although it was officially known as “Old Smokey,” most trainees referred to it as “Mount Mother Fucker.” Happily we only experienced it a couple of times.

I remember one time I was trying to heat up a “c-rations” meal with “heat tabs” and it was so rainy I did it under my poncho. It was like being in a gas chamber and I was starting to get overcome by the fumes. Thanks to Sgt. Bignami who saw what I was doing and stopped me, I was probably saved a trip the medical unit or worse. You'd have thought that my experiences in the boot camp gas chamber would have wised me up on that subject.  Oh well...

As I said, it was rainy and cold during my time in ITR. However wee were rolling along and were about half way through. One morning after reveille I walked back through my platoon’s Quonset huts making sure everybody had made their racks and was out of the heads and on their way to formation. Every thing was in order so I went out to the company formation. There was one guy missing from the formation and Sgt. Bignami said that the two of us would go looking for him. I was thinking he might be in the head. We walked through there and the guy was no where to be seen. He asked me if his rack was made up and I told him that it was. He said maybe the guy had gone AWOL. We walked back to his Quonset hut and I’ll be darned if the idiot hadn’t climbed back into his rack. I had just been in there about 10 minutes before and the guy wasn’t there. He must have waited until I’d walked through and then snuck back into the hut and then into his rack. Sgt. Bignami didn’t believe that I’d checked. I told him I did, but he didn’t buy it. I guess he felt that I was the one that needed to be punished, so he took the platoon away from me. I was so pissed!

Occasionally people are promoted out of ITR if they do a really good job. That’s exactly what I’d been doing. But I guess he saw it differently. It was actually easier just being one of the grunts instead of having the extra responsibility, so I guess he did me a favor. All in all, my time in ITR was a blast. I loved the weapons, I loved being outdoors, and I learned a lot.

I was working for the Postal Service as a supervisor in a large mail processing facility in Long Beach, California. One of the positions in my chain of command was the director of mail processing. That guy in that position was working somewhere else for an extended period of time. To take his place they were running a few different people through his spot. I was out on the workroom floor doing my job when the current person on detail walked up to me and introduced himself. He asked me some questions about the job and then walked away. I was left with the feeling that I’d met him before. The next day I spoke to him again. I told him that I was sure we’d met before. He didn’t think so. So we started the where did you go to school? How old are you? Etc…

He then asked me if I had been in the military. I told him I had, and that I was in the Marine Corps. He told me that he had been in the Marine Corps also. But it seemed like our paths had never crossed. That night I went home and looked through the few pictures that I had from my time in the Marine Corps. I looked in my boot camp book, he wasn’t there. I looked in all the individual photos I had, he wasn’t there. Then I found a mailing tube mailed to my home from Camp Pendleton many years before. I opened up the tube and took the rolled up picture out of it. It was a unit photo with all members of my ITR company in it. Right in front, there he was! The guy in the green metal flake helmet liner was the same guy now in charge of me at work. Frank Bignami.

The odds against our paths crossing had to be pretty slim.

Whenever Frank and I spoke, the subject of ITR eventually cane up. We seem to have slightly different memories of our time together. He has no memory of me of course, but he swears that he was a good guy. I always tell him that he’s a good guy now, but not so much back then. I think I’m the one who is right, but I have to admit he did a very good job helping us transition from boot camp to the regular Marine Corps.

I'm pretty sure that Frank Will read this and I hope he gets a kick out of it.