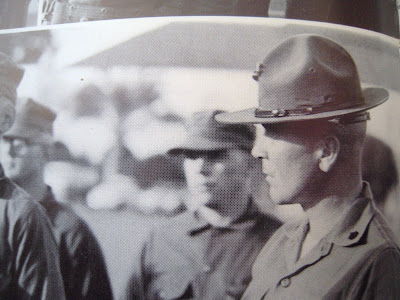 A couple of days into boot camp, we finally got to meet the platoon commander. The entire platoon was gathered in one squad’s Quonset hut. This wasn’t looking too bad. This was exactly the same way the PC of my previous platoon first met us. My good feeling didn’t last very long.

He started screaming at us almost immediately. He also started yelling “Air raid, Air raid!“ We all looked at each other because we didn’t know what the heck to do. He then screamed at us that there was an air raid, and if we wanted to save our miserable lives, we'd better take cover under the bunks.

As I said in an earlier entry there are only about eight sets of bunks in each hut. There were about 60 of us in the platoon. The bunks are double decked, so there are only eight bunks for us to get under. Let me clarify, there are only 8 bunks for all of us to get under. How is that going to be possible? None of us knew, but we tried. Of course there were arms and legs sticking out from under the bunks. The junior drill instructors ran around screaming, kicking, and stomping on anything that was showing.

Then he told us to get back out and gather as we were before. Once we were set, he started screaming air raid again. This went on for about an hour. Eventually it turned into a battle to get under the bunks. And eventually everybody fit. When we had finally done the task to his satisfaction he calmed down. He asked us what we learned in the past hour. Nobody knew the answer. So he told us.

“You learned to do exactly as you are told to do, and to do it as quickly as you can! If you don‘t do these things, I promise you, I will make sure that you regret ever being born. This little exercise was nothing! I have tricks that will fuck you up, that you can’t even imagine. So you can all do it your way and not pay attention to what we tell you, or you can do it our way. He then asked if anybody played handball.

A tentative hand or two was raised, but he didn't see them as he swiveled and walked out of the room without another word…